I. Šimonytė: A. Kubilius and I are the consequence of the crisis 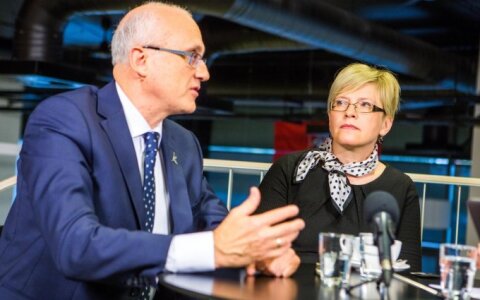 With calls in Seimas to review whether during Andrius Kubilius' term as prime minister in 2009-2012, borrowing from commercial banks did not cause widespread damage to the state, MP Ingrida Šimonytė retorts that this question reeks of personal issues and that the causes of the situation at the time could be traced back to 2004 when Lithuania entered the European Union. Meanwhile Seimas Budget and Finance Committee chairman Stasys Jakeliūnas defends himself, stating that there will be no settling of personal issues here and the investigation material could be especially useful. This was the discussion topic of the Dėmesio Centre talk show featuring both politicians, LRT.lt writes.

Related articles
Romas Lazutka. The tax system is functioning, but only for the president and her favourites
S. Jakeliūnas: there is no significant tax reform because the cabinet has not had time to “warm up”

S. Jakeliūnas justifies the creation of a commission to investigate the economic circumstances of the Kubilius era economic decisions through the investigation of what he describes as pseudo-myths of the global financial crisis sparked by the fall of Lehman Brothers striking Lithuania and that I. Šimonytė and A. Kubilius' government left Lithuania in debt and deepened the economic crisis through their nightly tax reform.

The politician notes that this effort will classify the issues and evaluate not just global trends of the time, but also local and regional ones. "Compare us to Estonia. It didn't have to borrow at all. Why? While Poland is a large economy and it has a different exchange rate, it still saw growth in the construction sector, while it contracted by 50% here. That's where all the unemployment stemmed from," the "Farmer" MP said.

Former Conservative Minister of Finance I. Šimonytė disagrees with the "Farmer" colleague's statement, stating, "Let us just look at the initial text, let's recall history, how it appeared. The signatures were gathered about a year ago, the text remained in someone's drawers for half a year until it was decided to deliberate on this question prior to Christmas. To Mr. Stasys' credit, I can say that he neither signed, nor voted for the presentation of this ruling in the plenary meeting. This shows that this text is not about finance, but about people. I am mentioned three times in it – even more than Andrius Kubilius, who is to blame for everything anyway."

The Conservative politician only became finance minister in the second year of A. Kubilius' cabinet and despite working for the initial Minister of Finance A. Šemeta, she was not in charge of borrowing. I. Šimonytė highlights that the worst borrowing agreements made since the beginning of the financial crisis were made by Rimantas Šadžius of the Social Democrat government and that she hopes that if the commission is formed, it will seek to investigate matters because currently it is not about the causes of the crisis.

"We are the consequence of the crisis together with A. Kubilius. And if we want to review the causes of the crisis, particularly compared to Estonia, we should return to the time of entry to the European Union when two things occurred – a credit boom sparked in the Baltic States, thus our economies suffered equally, however budget policies differed – Latvia and Lithuania had one sort, Estonia – another. And that is exactly why the Estonians endured the crisis practically without increasing state debt," she said.

S. Jakeliūnas further defends the review by stating that financial populism remains prominent and state and oversight institutions are forgetting crisis era lessons, which even now are not all stated. "Proposals to raise expenses abound across essentially all parties. Responsible borrowing is implemented in banking oversight, however consumer protection matters remain, in my opinion, insufficient.

In a few years, spare funding will appear, which will, by the way, be significant. It is good that the Scandinavian banks are being careful, however the situation could change in a few years. We have the conclusions, but we need to specify the reasons, lessons and present recommendations to all institutions so that we would avoid should economic booms. Especially at the expense of crediting so that fiscal policy would remain as responsible as now. Because there are proposals to loosen regulation and such," the "Farmer" politician stated, pointing out that various elections are nearing once more and preventative measures are needed.

These issues have, however, been discussed at length before, particularly notably during the 2012 electoral campaign. I. Šimonytė nevertheless concedes that despite around a decade passing, it is worthwhile discussing such matters, pointing out claims that matters proceeded the same in Lithuania and Latvia, which is not the case, according to her, with Latvia significantly cutting public spending, to a far greater extent than Lithuania.

In terms of Latvia turning to the IMF for aid during the crisis and receiving cheaper loans than Lithuania, the former finance minister stated, "That's a whole different question, but the main question is why exactly did Latvia call upon the IMF? Discussions often miss this. In autumn 2008 the second largest Latvian bank, Parex, crashed. They had urgent need for funds to ensure the stability of their banking system. Let me say it straight: if even one bank had faltered in Lithuania back then, even a smaller one, we would have also called upon the IMF all the same because there was no money in the Baltic States at the time. We can't talk of how cunning the Latvians were, thinking how to endure the crisis less expensively and how they made such a cunning decision, while the foolish Lithuanians didn't.

Another matter is that during the programme, the Latvians not only greatly cut expenses and raised taxes – they also had political crises. Two days ago we considered snap elections, which was rejected because it is a source of destabilisation which prevents the state from developing naturally. International creditor programmes are not sugar – in many states, which face receiving funds every quarter only if you fulfil conditions, you have massive resistance. It is the price which had to be paid, it is also has its costs."

While S. Jakeliūnas states he was no great enthusiast of the project, he nevertheless support a systematic, impartial investigation and believes that it is necessary to prepare further material on lending practices and economic oversight.

Political scientists have observed that the project has a tinge of individual targeting of I. Šimonyė, who is viewed as a potential presidential candidate in the Homeland Union – Lithuanian Christian Democrats' ranks. Furthermore, it could also impact another popular potential candidate – Gitanas Nausėda – due to the matter involving Swedish banks. I. Šimonytė does not dismiss such a possibility, pointing out that there is a wide number of references to her in the project which are of an accusatory tone. "To hold the investigative text in a drawer for half a year and then suddenly use it at some point – that appeared completely personal. What Mr. Stasys is doing does not appear so. He simply wants his book about the anatomy of the crisis to be confirmed through a Seimas ruling," she said.

To this, S. Jakeliūnas responded that, "By the way, this book also features a response by I. Šimonytė. As it does one from G. Nausėda. A. Kubilius' advisers disagreed that he would have the opportunity to pen a response, if everyone had signed, we would practically have a finished investigation."

S. Jakeliūnas is viewed as a fairly independent politician in the "Farmer" Seimas group, who often criticises even the "Farmer" government. When asked whether he is not worried of compromising his reputation by delving into matters, which reek of settling of accounts, he noted that perhaps it may appear so, but his goal is to remove the names. Furthermore, he points out, the investigation could also involve V. Blinkevičiūtė, who is seen as a potential Social Democrat presidential candidate. "My goal is not to play "political football", to deal with it as little as possible and if there is support in the group, it could become a fairly normal investigation.

In terms of convincing the public that it is beneficial to return to 10 year old events once again, the Budget and Finance Committee chairman notes that there is no guarantee that the same circumstances won't repeat once more in 2-3 years and the end goal is to prevent as many such phenomena as possible.

I. Šimonytė: A. Kubilius and I are the consequence of the crisis