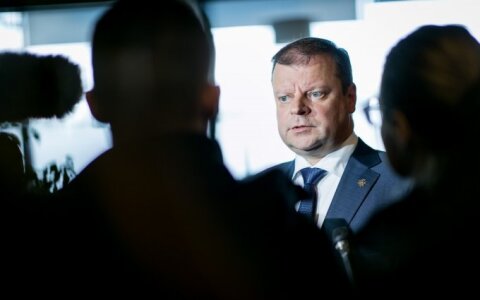 Prime Minister Saulius Skvernelis' statement that the large likelihood that Russia is behind the poisoning of a former intelligence officer in the UK does not mean one hundred percent certainty has been met with controversy, lzinios.lt writes.

This is not the first time that the prime minister's statements on foreign policy cause surprise and outrage. At the beginning of the year, he spoke on how this year Lithuania should renew contacts with Russian state representatives. He was met with widespread criticism from politicians and experts for this.

Likelihood is not confirmation

British Prime Minister Theresa May declared that it is highly likely that Russia was behind the poisoning of double agent Sergei Skripal and his daughter with nerve agent in Salisbury. The leaders of other Western states hold the same opinion, including the US, German and French leaders. In a display of solidarity to London, a dozen states, including Lithuania, have expelled a number of Russian diplomats each.

According to S. Skvernelis it is necessary to investigate the poisoning of S. Skripal and his daughter as soon as possible. He hopes that investigators will be able to present incontrovertible evidence of who is responsible for the attack. "I believe that both the UK and international experts should answer very clearly and put a full stop because there is a high likelihood of this being done by Russia, but a high likelihood is not a complete confirmation of the fact. I hope that the investigators, who are working on this case, will be able to present undeniable evidence," the PM stated.

At the same time, S. Skvernelis emphasised the importance of a coordinated response by the West to the events in Salisbury and of solidarity with the UK. "Sanctions to Russia show that for most states, the unconditional adherence to international law is crucial. The methods used in the UK are completely unacceptable. The response has displayed that this is not just a problem of Russia and the UK. This is fundamental," he evaluated.

Seimas Committee of Foreign Affairs (URK) member Žygimantas Pavilionis finds S. Skvernelis' words regarding responsibility for S. Skripal and his daughter's poisoning to sound "as if from a Kremlin loudspeaker." "Four of the largest countries– Germany, France, the UK and the USA - together with all their experts, coordinated data at the highest level and made the conclusion that this was done by Russia right in front of my eyes (I was in Berlin at the time). I do not know how one can doubt the conclusions of our NATO allies. The statement of the prime minister of a NATO member state certainly does not remind of solidarity comparable to that of President Dalia Grybauskaitė, as well as Foreign Minister Linas Linkevičius, who went to London and finally by making the decision to expel operatives. I was long surprised, why the prime minister did not react. However by reacting this way, he has essentially scored an own goal," the MP stated.

Ž. Pavilionis believes that S. Skvernelis' rhetoric shows that he has no understanding of what common foreign policy is. Our historical success in returning into the family of European states was, according to the URK member, based on the unity between the most important political powers on questions of national security. "Currently, when a NATO member state has been attacked with a chemical weapon, such a statement shows that S. Skvernelis likely is beginning to doubt this long lasting tradition and formula for success in our foreign policy. This proves that it is an effort to change the traditional course of our foreign policy," he explained.

Ž. Pavilionis has no doubt that S. Skvernelis is gearing up for next year's presidential elections and is flirting with the protest electorate.

Seimas vice Speaker Gediminas Kirkilas finds nothing wrong with S. Skvernelis' words. He reminded that the UK has still not fully confirmed that Russia is behind the poisoning of the Skripals. That said, yesterday the British media announced based on intelligence sources that there are almost no doubt that the nerve agent was brought in from Russia. "The question is as follows: if Russia denies its role then it either fails to control weapons of mass destruction, which is terrible or it is something done by them. However, I believe that the prime minister's statement was normal in this case. That's de facto how it is, Russia is trying to defend itself after all," he said.

Regarding the PM's earlier statement on the need to renew contacts with the Russian government, G. Kirkilas accented that it is a neighbouring government. Regardless of the circumstances, we have numerous bilateral affairs, such as transit to Kaliningrad. "It is a completely normal of a peaceful European state. Germany stated the same by the way. I see nothing wrong here and we should not confuse different matters. The opposition is acting hypocritically. On one hand, they display exaggerated concern that supposedly there is treason here. On the other hand, it is very odd that the Conservatives and Gintautas Paluckas' Social Democrats have taken apart the renewed defence agreement. The prime minister, knowing the public's opinion in part, is trying to reduce tensions a little. Lithuania has only stated once more that it is a normal European state and does not wish to ruin relations with its neighbours. There is nothing wrong here, it is not a betrayal of Lithuania," G. Kirkilas assured.