Bielinis: the Markauskas scandal could ruin our very fragile democracy 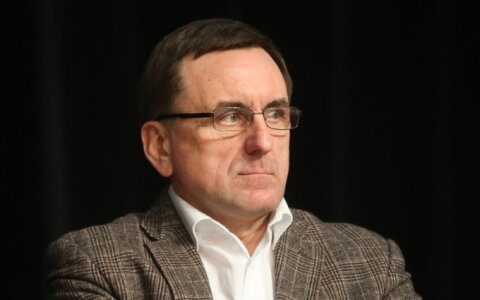 The scandal involving Minister of Agriculture Bronius Markauskas, where land was cultivated without the permission of its owners is not a minor issue, which could be resolved by a few institutions, but a serious test of not only Prime Minister Saulius Skvernelis' cabinet, but the entirety of Lithuanian democracy. This is the conclusion Vytautas Magnus University professor Lauras Bielinis suggested on the LRT talk show Dėmesio Centre. Mykolas Romeris University lecturer, political scientist Rima Urbonaitė, who was also featured on the show, emphasised that based on world practices, the minister should have already resigned, lrt.lt writes.

L. Bielinis believes that based on the statements made by the minister of agriculture following the scandal's eruption, perhaps B. Markauskas does not quite grasp, what has occurred. "A new person entered politics and perhaps sometimes does not grasp his responsibilities, possibilities and moral limits, which he should not overstep. [Usually] they are not very visible in life, but here they are very clear and have to be recognised. An individual, who does not know it gets confused and may make numerous mistakes. And here – these are mistakes, which are being displayed very clearly," L. Bielinis stated, pointing out that due to this mistake it quite likely will be necessary for the minister to resign.

When asked whether stalling could somehow improve B. Markauskas' chances or if it would simply complicate matters further, R. Urbonaitė observed that when it comes down to it, the individual factually broke the law and questions, how an individual, who is unable to adequately manage his own farm is expected to manage all of Lithuanian agriculture.

"This is not the first such case in this government. For example, a law was passed to control pharmacies and suddenly it surfaces by accident that prescription drugs were sold with no prescription. What, do the ministry staff not go to pharmacies and not know it? Of course, everyone knew, but their eyes were closed up to a certain red line. Now the question is whether the minister will accept responsibility because now the situation is complicated even further [by stalling]. <...> What is most important is that article 96 of the Constitution states that ministers are accountable to the Seimas, the president and are directly subordinate to the prime minister. The question is what the prime minister's position will be because the matter has now shifted from "a family issue" to "it should be dealt with." But were essential matters not breached here? World practice shows that lesser matters suffice for a minister to lose their post or a politician to lose their entire political career," R. Urbonaitė said.

The cabinet itself has not been faced with personal scandals or personal minister compromising and L. Bielinis finds that this first case is a serious exam for the prime minister. "He now has to make a decision, which would allow him to continue remaining in the political field as an authority. But if he makes a mistake or, say, applies the principles of friendship, not law to his own, you could say that we will see his ruination in politics," he notes.

R. Urbonaitė highlights that S. Skvernelis and the current majority arrived in government under the banners of transparency and fairness. This scandal raises the question, whether the prime minister will stand by his declarations and principles. Indeed, she points out, the prime minister has yet to be seen to ever criticise his ministers. Despite the situation having also been serious, no criticism was levied toward Milda Vainiutė, with him assuring he was content with her work. As such, a major questions stands, according to the political scientist – will there still be a refusal to accept reality, whatever it may be? R. Urbonaitė highlights that this is to be a sort of test for the prime minister, a display of whether he can be a different politician and whether he can change political culture in Lithuania.

In terms of the president's role under current circumstances, given that cabinet ministers chiefly rely on the judgement of the prime minister and president, L. Bielinis expects a strong response from President Grybauskaitė, as she has spoken on numerous occasions on the transparency of government work, corruption links and overall actions, which lead to breaches of the law. He believes that big or small, the president will react because it is a matter of principle to her.

When asked whether she believes the president will request minister Markauskas to resign, R. Urbonaitė was unsure, highlighting how in the previous cabinet, the minister of education and science was particularly controversial, but was tolerated by both the then incumbent prime minister and president, despite intolerable actions.

The president has met with failure when previously requesting such a resignation from a former minister of environment Gediminas Kazlauskas, but she did not face any losses of political capital despite it and R. Urbonaitė notes that given that it is highly unlikely that the Seimas would proceed with an interpellation against B. Markauskas, given the responses of ruling Farmer and Greens prefect Ramūnas Karbauskis so far. As such, a principled stance is needed from the Presidential Palace and if the prime minister refuses to support such a move, the political scientist believes that he will compromise his reputation far more than the president.

There have been statements made that the minister intends to relinquish his farming activities. While formally it would be the minister's mother, who would sell the offending farm, it is widely perceived as B. Markauskas. L. Bielinis notes that such intentions are as if catching a thief red handed and letting them off because they returned the goods. "In this case the problem is not resolved. Particularly in the political field. In this case it is a clear breach of the law and it will have to be answered for," the expert stated.

R. Urbonaitė echoes this sentiment, noting that reputation is what politicians should value most, but unfortunately, in Lithuania it is simply people, who have no better ideas, who enter politics. She emphasises that in this respect, the question of responsible voting is crucial, the people themselves should demand from politicians that their reputation would become the greatest value and view politicians based on their reputation and actions.

L. Bielinis finds that the entire debacle is far more significant than being simply the story of B. Markauskas. If it were a matter of only that extent, the political scientist finds that it could simpy be resolved by several institutions. In this case, however, it is a matter of not upholding certain standards and such disregard needs to be adequately responded to, even if it is regarding details. The case of B. Markauskas, L. Bielinis notes however, is no small detail.

Regarding this scandal being a marker to measure the government's integrity and standing of moral politics, R. Urbonaitė believes that this is an opportunity for it to either retain the bar raised and prove through actions that its declarations of transparency and fairness were true or the opposite. At the same time, she stresses that the public response and public perceptions are important as well, stating, "But it is also a question of civic mindedness – that we, the citizens, not even to talk of ministers or politicians - would begin to adhere to the law. What can we even talk of if we fail to even do this? This maturity, both of politicians and of the public is very hard to reach."

If the minister and the Seimas majority chose to defend B. Markauskas, stressing that the latter's mother sold the farm and the minister intends to proceed on the path of a politician and will no longer cheat, which could lead to the president hardening her position even further, L. Bielinis sees potential for a conflict between the president and prime minister, as well as tensions in the Seimas, which would open the way to those, who would use this to draw voter attention.

"It will be confusing, but we will certainly not reach any heights in either morals or legality. If such a model arises, it will ruin our very fragile democracy," L. Bielinis concluded.

Bielinis: the Markauskas scandal could ruin our very fragile democracy