PM: president's criticism makes it hard for agriculture minister to stay on 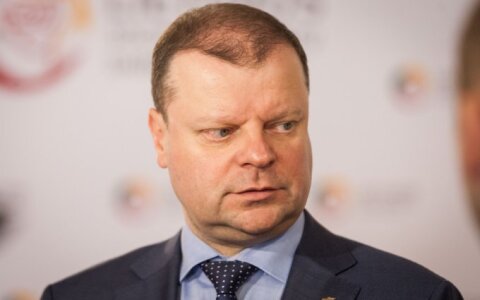 After President Dalia Grybauskaitė said that Agriculture Minister Bronius Markauskas can no longer remain in office, Prime Minister Saulius Skvernelis says that it would difficult for the minister to stay on.

"After the statement from the head of the state, it would be difficult for the minister to continue his work, however, all decisions will be made upon return to Vilnius," the prime minister told journalists in Kiev on Thursday.

He noted that the criticism against Markauskas were not directly against him but against his mother's farm.

"I would want these things to be in direct connection with the minister," said Skvernelis.

On the other hand, in his words, "it is not a good thing that the ministry and the minister are getting bad press."

"But the necessary decisions will be made," the prime minister emphasized.

The prime minister will return from his visit in Kiev on Thursday afternoon.

Earlier in the day, the Lithuanian president said that Markauskas, who has recently come under criticism over his family's farming practices, can no longer remain in office.

"I think such a minister has neither the political nor moral right to stay in his post. He has lost it," she said in an interview aired by LRT Radio on Thursday.

Ramūnas Karbauskis, the leader of the ruling Lithuanian Farmers and Greens Union that delegated the minister to the post, and Parliamentary Speaker Viktoras Pranckietis said they were happy with the minister's performance in the post, adding that his fate was up to the government to decide.

The 15min.lt news website has reported recently that Markauskas' mother, Sofija Markauskienė, has been using several plots of land in the district of Klaipėda without the landowners' permission for five to six years and that she has been receiving payments from the National Paying Agency for that land.

The agriculture minister is currently on a leave and will be back in office next Monday.

PM: president's criticism makes it hard for agriculture minister to stay on