Lithuanian favourites surfacing: “Farmers” may have a plan B 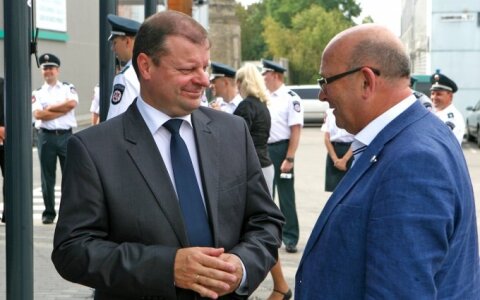 Saulius Skvernelis is increasingly viewed as suitable for the post of prime minister, but in presidential candidate ratings, he is increasingly far behind the favourite candidate, economist Gitanas Nausėda.

Based on a Spinter Tyrimai survey commissioned by the Delfi news portal on March 21-29, it was revealed that S. Skvernelis' ratings were at 8.7% in March. Frontrunner G. Nausėda's ratings as a presidential candidate reached 22.2%. In February, this difference was respectively 9.3% and 20.4%.

Between S. Skvernelis and G. Nausėda, we find Kaunas Mayor Visvaldas Matijošaitis in second place, with ratings of 13.9% in March and 11.7% in February.

S. Skvernelis' fortunes are far better in the survey, where people vote for the most suitable to be prime minister. Here he was first in March with a rating of 19.2%, up from 15.3% in February.

Spinter Tyrimai head Ignas Zokas concluded that S. Skvernelis is increasingly viewed as suitable for the post of prime minister and viewed as being a good PM at that.

"It does not necessarily mean that one person can be a good prime minister, mayor and president. He is strengthened in the prime minister column, but the puzzle is a little different in the presidential column," I. Zokas said.

The head of Spinter Tyrimai stated that S. Skvernelis' chances would also depend on whether V. Matijošaitis chose to participate in the elections because "their electorates overlap."

"G. Nausėda's electorate is more city based, of higher income and education. S. Skvernelis and V. Matijošaitis' electorates are rather lower income, lower education, residents of the regions and smaller cities," I. Zokas said.

Vytautas Magnus University (VDU) Political Science and Diplomacy Department dean Šarūnas Liekis did not dismiss that in such a case, if S. Skvernelis chose not to run for president, the "Farmers" could back V. Matijošaitis in the elections.

"Disregarding that from one side it is as if oligarchs, but their orientation is very clear – centre left. The centre left currently has no other candidates," Š. Liekis said.

On the other side, the political scientist can see G. Nausėda and Vygaudas Ušackas as the favourites of centre right voters. In his opinion, the Christian democrat leaning Žygimantas Pavilionis will also be among the Conservatives' favourites. Nevertheless, Š. Liekis believes that they will back G. Nausėda in the end.

The political scientist believes that regardless of how the final list of candidates turns out, "No right wing candidate stands a chance." Apparently, the best odds will be for the candidates, who are inclined toward the welfare state.

It may be that the face of the centre left will surface only in the last moment, the political scientist believes.

From the ratings it can be seen that Naglis Puteikis and Aušra Maldeikienė, who draw on the protest vote" remain in fairly low positions, with their ratings being 3.9% and 1% respectively in March.

"If we are talking about parties, then you can be in the Seimas with five percent. In the case of presidential elections, the winner is only one and the votes revolve around more realistic candidates, there is no wide spread. There is little belief in the chances of A. Maldeikienė and N. Puteikis," I. Zokas said.

The head of the public opinion and market research company Vilmorus Vladas Gaidys stated that the results of both his company's research and that of Spinter Tyrimai are similar and have been such for around half a year.

"If it turned out that the Homeland Union is backing one of four candidates, the configuration would perhaps change. It is clear that none of their candidates is of the same calibre as Dalia Grybauskaitė was a decade ago.

She would likely be elected for a third term, but since that is not possible, now everyone is very interested again. It is akin to 2002 when there were 17 candidates, when there was an interesting competition," V. Gaidys said.

The sociologist separated the potential candidates into three leagues: G. Nausėda, V. Matijošaitis and S. Skvernelis are ahead of everyone else. After them follows the quartet of Ingrida Šimonytė, Vygaudas Ušackas, Vilija Blinkevičiūtė and Žygimantas Pavilionis and then the rest.

"We can see a certain specialisation of electorates: G. Nausėda is backed by the more successful, higher earning and better qualified Lithuania, S. Skvernelis – the other Lithuania, mostly regions, regional centres and rural areas. V. Matijošaitis is not clearly defined, but that is a certain presidential advantage in itself," V. Gaidys said.

So far, only former diplomats V. Ušackas and Ž. Pavilionis, alongside economist A. Maldeikienė and MEP V. Mazuronis have expressed their intent to run for president.

The public opinion and market research company Spinter Tyrimai performed a public opinion survey on commission by the Delfi news portal on March 21-29, 2018. Participants were aged 18 to 75. The survey was held as a standardised interview.

The research was performed across Lithuania at 65 locations distributed to represent the entire country's territory. 1009 respondents were interviewed. The distribution of participants is proportionate to the number of inhabitants in the country's regions. The research error margin is 3.1%.

Lithuanian favourites surfacing: “Farmers” may have a plan B