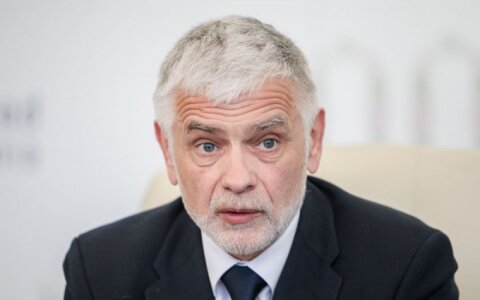 The news reported by the 15min.lt news portal that the minister of agriculture cultivated land without its owner's permission and received European funding on behalf of his mother has become yet another challenge to the promises of different, more transparent politics promised by the "Farmers" and for the cabinet of professionals – a question on whether such a professional is suitable not just for domestic policy, but also for negotiating future grants from Brussels to Lithuanian farmers, lrt.lt writes.

It was namely this circumstance that the president emphasised in her declaration that Bronius Markauskas has neither political, nor moral rights to remain in his post. The president was categorically opposed by Ramūnas Karbauskis, who implied that the current president's time in her post is ending, thus they will "come to terms." The Seimas speaker supported his leader regarding the minister of agriculture, while the prime minister, after hesitating a little, chose to lean in R. Karbauskis' direction. The minister told the LRT show Savaitė that if decisions are made with "a cool head" and in no rush, there are chances for B. Markauskas to remain. And there are no conditions to hurry, initially the minister was on holiday for several days, on Monday he is departing on a business trip and will only have time to finally meet the prime minister on Tuesday.

Minister of Agriculture B. Markauskas was already involved with the lands, which do not belong to him, even before arriving at the ministry, just told no one and no one knew, as for those, who did know would appear to have remained silent. This is because in 2014, 2015 and 2016, the farm of Sofija Markauskienė was run on behalf of her. Bronius Markauskas admits that he was the one authorised to run the farm, as well as documentation on direct EU grants. Also for the lands, which did not belong to the farm.

"It wasn't me, who filled in the documents, a specialist at the eldership did. Of course, I presented the data myself and we drew up the maps together. And of course, I, as the authorised individual, because I have never been a farmer, instead always being the authorised individual because the 27 year old story, it is definitely my mother's farm and was such all the time. Yes, I signed," the minister of agriculture stated.

Despite admitting that it was him, who ran his mother's farm without adhering to the law, B. Markauskas says that small farmers do not have time to keep everything in mind, which happened to him as well and denies accusation of land appropriation, corruption and document forgery. However, he is unable to explain, how plots of land, which do not belong to him and for which he would receive 350 euro annually, appeared in the documents. What is more, he admits that he is uncertain that he obtained at least the verbal agreement of all four farmers to make use of their lands.

"I definitely, as far as what I can say, did not do anything intentionally, where I understood I am risking. I believe that one of them could confirm that I approached them and asked whether I could make use of their land because, because... And I received confirmation. Whether from all four, I am unsure today. And to say that Lėlys agreed, I cannot confirm," B. Markauskas said.

The minister's family rents most of the land it cultivates and only part of it is based on lease contracts. As such, the minister admits that there could be others, who take issue. Usage contracts have been signed with some landowners and with others – verbal agreements, while the remuneration was based on barter.

"There are various ways, some needed dung, some something else, but with money..." B. Markauskas said. When asked whether there were barter exchanges, he responded, "Well, not with everyone, but of course. As I mentioned, most agree so that the land is taken care of."

From a legal perspective, the minister of agriculture's actions are a matter of civil liability, not criminal liability.

"In terms of civil liability, he likely illegally profited at someone else's expense. Perhaps the usage of grants could lead to such a liability because he certainly did not adhere, most likely, to rules – declared that, which could not be declared and such. But criminal law has an even higher bar," Vilnius University Penal Justice Department docent dr. Remigijus Merkevičius stated.

As could have been expected, the minister was backed by both the prime minister and the party chairman, who aimed at presenting him as a victim. The prime minister found it to be a family matter, thus he urged B. Markauskas to sort it out, however this would not prevent the minister from remaining in his post.

R. Karbauskis stated regarding B. Markauskas, who was farming in lands that do not belong to him that the situation was fabricated and that behind it stand the Social Democrat Party of G. Paluckas. R. Karbauskis claims that the minister has no need to withdraw and the situation is meaningless.

"Stories are being manufactured. One surname, a mother, something else, they would like it to be linked with the minister, linked unambiguously," Saulius Skvernelis mused.

"The group's support of the minister is absolute. I personally believe that the minister has been set up," LVŽS chairman R. Karbauskis stated.

However, the support of both figures did not convince the president. She categorically declared that B. Markauskas no longer has either political or moral right to remain in his post. She also added that the defence shows both the party and the prime minister's views of politics and morals.

"Blind defence of the ruling majority's minister will demonstrate a lack of political and moral responsibility and will place the head of cabinet into a very bad situation," Dalia Grybauskaitė told LRT Radio.

After these words, the prime minister turned on his axis and admitted that after such an opinion from the president, it would be very hard for B. Markauskas to continue working in the cabinet, however R. Karbauskis continued with his narrative, just now aiming not at the Social Democrats, but the Conservatives – supposedly the president is politicking and thus trying to cover the Conservative party's problems.

"This "Farmer" reaction, they likely don't grasp it yet, but it harms their reputation greatly because the moral standard has hit rock bottom. If it's one of our own, we can fire whoever, but if it's an other – we can fabricate something," 15min.lt chief editor Raimundas Celencevičius spoke.

Now everyone is watching the prime minister and waiting on how he will demonstrate his understanding of morals and transparency – based on principles or listening to R. Karbauskis' opinion. This ministry is especially important for the "Farmers," the minister is one of three party members they have in the cabinet. However, it is clear that the prime minister earlier would choose a clear position and is now choosing compromise because it would appear he needs the support of R. Karbauskis and the party.

"If Mr. Skvernelis was not thinking about his political future, he could be independent. But it is clear that he began to think about the future and it is not simply the seat of a member of Seimas. Increasingly many signs show that S. Skvernelis may run for president and he needs at least a year of "Farmer" support for it," R. Celencevičius stated.

And that's what he is demonstrating. After stating during his Ukraine trip that the minister will find it hard to continue working after the president's statement, on returning to Lithuania he changed his mind once more and accused the Conservatives, akin to Karbauskis.

"I can only repeat that it will be very hard to work, very hard, but possible. I experienced it myself. Currently I see no problems, why he couldn't work. The president, unfortunate as it may be, enacted the Conservative Party chairman's demand on the eve for a strict stance to be held regarding the minister," S. Skvernelis said.

Thus the "Farmers" and the prime minister could simply ignore the president's urging. It would appear that B. Markauskas also has hopes to continue leading the Ministry of Agriculture.

"I believe I have done nothing wrong. I really... Of course, I cannot direct the prime minister, but the prime minister will definitely decide and whether I hope or not, that's my own opinion," B. Markauskas said and asked if he would want to remain minister, stated, "I am thinking, if to think without hurrying, then I believe there are chances."