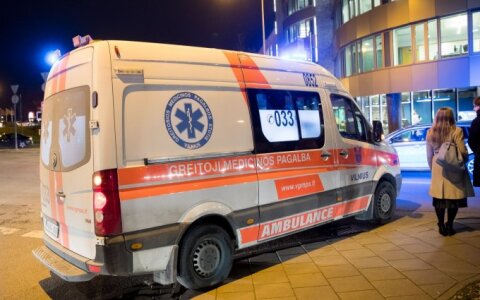 Lithuania's government intends to increase the number of the brigades of the emergency medical service as one of the innovations envisaged in the package of structural reforms presented by the government on Monday.

"As early as next year, we plan to have additional 20 medical assistance brigades that would ensure better transfer of residetns to specialized hospitals," Health Minister Aurelijus Veryga told a news conference on Monday.

Government members said increased number of medical assistance brigades tending to patients in emergencies will reduce the number of deaths caused by infaction and stroke.

Officials of the Health Ministry have said that a new phase of optimization of health care institutions was in the pipeline, however, did not speak about it in the presentation of the projected key reforms.

Among the planned health reforms are larger teams of family physicians, development of e-medicine and improvement of the system of registration for doctor's appointments.

In order to raise salaries for doctors, the government intends to review tariffs for services, especially the ones in connection to health care of residents over the age of 65.

In the presentation of the planned reforms, Veryga referred to earlier deals made with doctors' trade unions to raise salaries by 20 percent starting May. In his words, the salafy fund of medical staff had been increased by nearly 100 million euros this year, with another 20 million euros to be generated via additional paid services.

The priority in the salary increase scheme will be given to those making the lowest monthly wages, however, specific increases will depend on decisions taken by top managers of specific medical institutions.