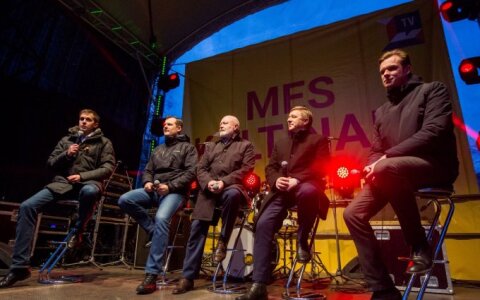 As the prime minister is delaying a decision on suitability of Agriculture Minister Bronius Markauskas to continue in the post, members of the parliamentary opposition are considering an interpellation against the minister and against the head of the government.

"I believe we should not only discuss the situation surrounding Markauskas but also the responsibility of (Prime Minister) Saulius Skvernelis for the situation, as his actions demonstrate that he finds situation suitable and acceptable," MP Gabrielius Landsbergis, the leader of the parliament's largest opposition group of the conservative Homeland Union – Lithuanian Christian Democrats.

"We will invite representatives of the minority for a discussion and see the overall atmosphere – can we demand the prime minister's responsibility by ballot or whether we will be short of votes. This is what we will do shortly," he added.

In the conservative's words, the possibility of initiating impeachment against Markauskas as an MP will also be considered.

Earlier on Wednesday, President Dalia Grybauskaitė said that Markauskas was possibly breaching a few chapters of the Constitution by being engaged in farming activities.

Opposition MP Algirdas Sysas of the Social Democrats said that the agriculture minister deserved interpellation. Eugenijus Gentvilas, the leader of the opposition Liberal Movement, said the issue of the prime minister's responsibility could also be raised.

MP Remigijus Žemaitaitis, the leader of the opposition Order and Justice party, said the issue of the agriculture minister would be finalized within the coming few days, making the interpellation redundant.

"I believe Bronius will make a decision himself very soon. Knowing that Skvernelis was slapped on the wrist by who appears to be Ramūnas Karbauskis (the leader of the ruling Lithuanian Farmers and Greens Union that delegated Skvernelis to the government), the issue probably won't be procrastinated – it should be settled on Thursday or Friday, and Markauskas will resign," said Žemaitaitis.

Last week, Grybauskaitė said she did not deem it possible for Markauskas to continue working in the government, while the prime minister then said that it would be difficult but possible for the minister to work.

Skvernelis pledged to make a principled decision after meeting with the minister. After the conversation with Markauskas on Tuesday, the prime minister announced the minister would stay in the post until the law-enforcement checks the circumstances of his family's farming before making the final decision.

A bid to Remove the minister requires at least 71 votes in Lithuania's 141-seat parliament.