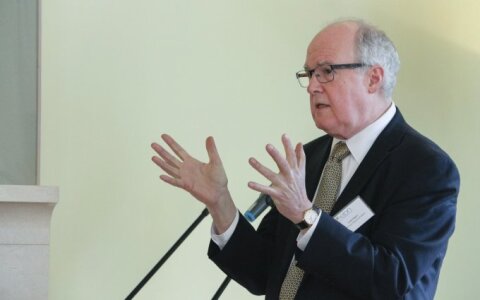 Media can be a veritable minefield these days and the European Business Network invited its members and business breakfast guests to learn a little about talking to and consuming the media. The speaker, Ludo Segers, gave a fascinating presentation about the state of affairs and offered some valuable insights into “what to do when you become the news”.

The event, hosted by the Embassy of Romania in Vilnius, offered the EBN members some practical advice on how to deal with the media as spokespeople of their respective organisations. The speaker Ludo Segers, a photographer and a long-time media collaborator, also shared his views on the current media landscape in Lithuania and abroad, noting that media consumers should treat every day as if it were April fool's – that is, take everything they read or hear on the media with a grain of salt.

Speaking to the media can also be tricky. Have a message and stay on message was Mr. Segers's advice. "Do not trust journalists – they are, most likely, not your friends." Telephone interviews are particularly deceptive, since they give the interviewee a deceptive sense of comfort. "Treat a phone interview like a face-to-face one: Arrange the time in advance, dress for the occasion, even if no one sees you, and stand up during the conversation," Mr. Segers said.

Addressing recent hot topics in the media, Mr. Segers lashed out at Cambridge Analytica, the notorious data mining firm that got recently exposed for stealing Facebook users' data and using it to assist Donald Trump's campaign. He said: "Supported by the then Trump campaign manager Steve Bannon and financed by the Mercers, deep-pocket Trump supporters, they seem to be the darlings of Fascists and other unsavoury regimes in attacking and undermining democracy."

Mr. Segers also shared his views on the state of the press in Lithuania. Most young people no longer read newspapers and the two surviving print dailies struggle like most papers everywhere. "There is a serious lack of resources for investigative journalism, at best most papers can work in consortiums, like the one that broke the Panama papers," Ludo Segers said. "Only a few large news publications, such as the New York Times, The Washington Post or the Wall Street Journal, are able to dig deep into corruption and electoral abuse."

"Far too little attention is paid in Western Europe to Russian activity on many fronts in their 'divide and conquer', using social media and comment sections of influential newspapers," according to Mr. Segers. "For disinformation, lies, manufactured news and fake news, count on the Kremlin, they have a long history of spreading lies and airbrushing people out of history."

Mr. Segers quoted recent books by former US Secretary of State Madeleine Albright and Yale Professor Timothy Snyder about the rise and dangers of fascism in the USA, the Philippines, Turkey, and closer to home, Hungary, and Poland. He said, "Leaders start thinking that they are above the law, attack the press, condone or encourage violence, interfere with or do not find the courts are useful and voice that democracy is not or no longer working."

The audience asked questions about how to identify fake news and even conspiracy theories. The speaker said that "if it looks too good to be true, or too awful, it probably is".

He also told the audience that it is part of the life at home to instill in children a sense of looking critically at what is being peddled on the news as well as being able to discuss politics at the dinner table with an academic-like vigour, particularly toward democracy and dangers against democracy.