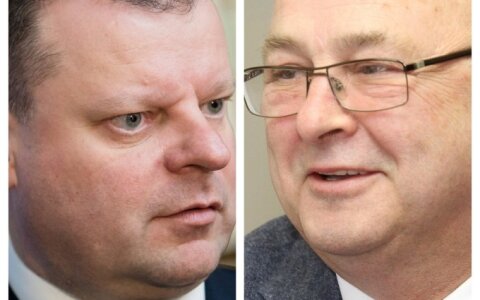 66.5 percent of people surveyed had a favorable opinion about Lithuania's leader in April, and 18.5 percent had an unfavorable one, compared to 61.8 and 21.9 percent respectively in March.

Foreign Minister Linas Linkevičius and Speaker of the Seimas Viktoras Pranckietis also got into the TOP 5 of politicians people view favorably. 47.4 percent had a favorable opinion about the foreign minister, and 14.7 percent had an unfavorable one, compared to 47.8 and 16.6 percent respectively in March.

The Seimas speaker was favorably viewed by 43.1 percent in April, slightly down from 43.3 percent in March. And the number of those having an unfavorable opinion increased from 19.7 to 21.4 percent.

"I would add that from politicians probably Agriculture Minister Bronius Markauskas saw the biggest rise of negative evaluation – by 9 percentage points from around 20 to around 29. So those stories had negative impact", Vilmorus director Vladas Gaidys told BNS Lithuania.

Markauskas came under fire after the 15min.lt news website reported that Markauskas' mother, Sofija Markauskienė, has been using several plots of land in the district of Klaipėda without the landowners' permission for five to six years and that she has been receiving payments from the EU for that land.

The Vilmorus survey was carried out on April 6-15.