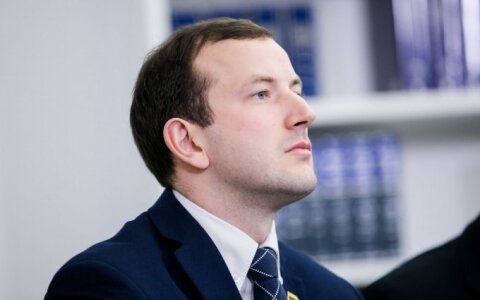 In general terms, all of us know about the economic development of the restored State of Lithuania in the last hundred years. Many things have happened. What could we expect from our national economy in the new century we have just stepped in? Minister of Economy Virginijus Sinkevičius has shared his vision with Lietuvos Žinios (the Lithuanian News).

– We have already counted to one hundred. How is our national economy expected to develop after crossing the line?

– In the last century, we learned the bitter lesson that we have to cherish our freedom and the independence of our country most of all. A sustainable economy contributes to safeguarding independence, strengthening the State and creating welfare for the citizens.

First of all, and this is very important, Lithuania has to be competitive. We always try to offer the shortest and fastest procedures for our business and foreign investors so that their money could be employed as soon and as effectively as possible. For us it is most important that those funds could create as many products of added value and as many well-paid jobs as possible. We are a small country, therefore, we have to find niches to specialise in, lead in and increase our advantages. It is evident that we must start constructing the spine of our national economy based on high technologies.

– In what areas does Lithuania have the biggest possibilities to advance on the ground of high technologies?

– The ones in which we show the most significant progress. In particular, these are life sciences, engineering and the laser industry. The Lithuanian biotechnology sector creates about 1.5 percent of the national GDP. It could seem like a small part but this number exceeds the EU average by 10 times. We have excellent potential in this area. Our scientists carry out activities for which they could be awarded with the Nobel Prize, like, for example, professor Virginijus Šikšnys who was within a hair's breadth of receiving the Nobel Prize. We have talents who may offer the best to the world. Therefore, the decisions of world-famous brands to choose Lithuania were not accidental. Life sciences grands like Teva, Thermo Fisher, Moog, Holister, Intermedix and Intersurgical are investing and moving to Lithuania.

Another area of great importance is the engineering industry. The turnover of companies in this sector reaches EUR 3.3 billion in Lithuania. They export more than 70 percent of their production. Robotics and transport systems are two areas that require especially high competences and have the biggest potential in Lithuania.

The success of the robotics sector in Lithuania is determined by the manufacturing automation tendencies brought by the fourth industrial revolution. I can say that the potential is so strong that even engineers in factories create and equip robotised production lines despite this being not their basic activities. Moreover, Lithuanian companies are successfully introducing robotised systems for the medical sector and military industry. I believe that Lithuania is able to play a very successful role during the transformation period of the fourth industrial revolution.

I would like to highlight autonomous cars. Companies that ready to install innovations in cars and smart transport systems are coming to Lithuania. Lithuanian scientists and professionals are already working on solutions aimed to help improve the control systems of autonomous cars.

The State goes hand in hand with business in this area. For this purpose, favourable legal regulation have been developed in Lithuania. At my initiative, a draft law aimed to permit the testing of autonomous cars on domestic roads has been registered at the Seimas. So far, it is the best regulation in the EU. Future cars may be tested on the Lithuanian roads already. It is gratifying to know that we have become an example to be followed by other countries and that we are a bold country in which future technologies can find their place already now.

When speaking about the spine of the Lithuanian economy I cannot leave the laser industry unmentioned. This is another field where our country is well known. The Lithuanian laser sector has been active for half a century already, or just five years less than the discovery of the first laser in the US. The number of companies in this area has grown from 10 to 30 in Lithuania in the last decade. More than 800 persons are employed in the laser industry, and every tenth of them is a PhD.

I have stated more than once that when presenting the achievements of our laser developers to world-known companies they are really amazed, how effective solutions offered by Lithuanian laser developers are and how well the devices operate. We are already exporting our production to 100 countries of the world; only few countries have no access to Lithuanian lasers. The major EU, US, Chinese and Japanese laboratories and research centres are among the buyers. 90 out of the 100 best universities in the world are using Lithuanian laser production. Thus, we can be proud already and the attention for this sector from science, business and the State must continue to be consistent to help this sector intensify. I believe that using lasers in medicine will become even more relevant in the future; and life sciences we have just talked about will not be left behind.

– You have said you do not imagine Lithuania's future without the most modern technologies that are undoubtedly progressive although not tested by time yet. What, in your opinion, is their role in our domestic economy?

The fintech growth is one of the most rapid both inside and outside Lithuania, and this technology is responsible for revolution in the banking sector. Our specialists have been working for a number of years already in Lithuania-based information technology units of global financial organisations like Western Union, Danske Bank, Nasdaq and others, which is a good foundation for this industry sector development. The most innovative fintech solutions are being created by Lithuanians.

We also see high level of activity of foreign financial technology start-ups. They are moving to our country just because of a bold decision of the Bank of Lithuania to create a 'sandbox principle' when the possibility is given to test new products for three months and receive professional consultations from the Bank of Lithuania and try own products in the euro zone at the same time. It is very potent. Even Revolut, a revolutionary in the financial sector, is coming to Lithuania. The role of Lithuanians in this sector is also very active. Our successful start-ups like Paysera, Instarem, TransferGo and others, who have achieved excellent results, also cannot be forgotten.

It is also important that strengthened fintech will contribute to the successful development of other areas, including cyber security and the blockchain technology, which I've talked about and which is often compared to cryptocurrencies. Its application is much wider however. This technology may significantly improve the public sector and its services, record transactions of acquisition of securities, land and real estate and keep marriage records. An increasing number of companies in Lithuania are interested and intend to apply the blockchain technology in areas like insurance, financial services, education, etc.

The system of green energy company WePower established by Lithuanians will be based on blockchain. One Lithuanian start-up is creating a 'carVertical' platform, which is the first global decentralised register of cars' history based on the blockchain technology. The idea of a car leaving the factory with the unique number is absolutely new. This number would help trace the car's history and all the related nuances. This technology has already caught interest of a motor industry giant like BMW.

An international centre of blockchain technologies was opened in Vilnius at the end of January of this year. It is operating in a joint network with similar centres in Melbourne and Shanghai. It serves as a place for blockchain fans, start-ups and investors to exchange ideas and best practices as well as to find reliable partners for their projects in the world.

During the visit to the US, Lithuania's progress in developing blockchain received the attention of local businesses and international organisations. Hence, there are many development possibilities; all we need is to take advantage of them and not to give up our positions. It is evident that the potential here is huge and Lithuania has to be brave, whereas the Government has to be among the pioneers in the EU in clearly regulating this area, encouraging local companies to develop this technology, attracting foreign companies and thus contributing to blockchain development.

– What preconditions are needed for Lithuania to become the leader of high technologies capable of leading to the growth of the future economy?

– Talented people are most important and our country is rich of them. Lithuania is among leading European countries with regard to the number of people with university degree.

In order to reinforce the innovation ecosystem and growth of target industries in Lithuania, the problems of the educational system will need to be addressed. Based on global trends, the people will have to commit to life-long learning. The task of the State is to create a system to allow the re-orientation of specialists so as to quickly offer another profession to them, for example, to teach programming, maybe work with electronic devices, robotised machines, etc. in half a year. These things will be needed by business in the search of employees, by employees and the State as well.

Foreign direct investment is very important for this economic transformation. When foreign companies choose Lithuania, we are glad, especially about good wages and good work conditions. We often forget to mention, however, that our people contribute to the creation of innovations of world-known companies and the expertise acquired by them does not disappear — it may continue to be applied in Lithuania. This is an important role of foreign investments.

Last but not the least important aspect to turn wishes into reality is successful cooperation among science, business and public authorities, their understanding and continuous dialogue. Science, business and the State are three columns supporting future Lithuania.

Today, in the process of drafting proposals on how to improve the start-up ecosystem, the Ministry of Economy is having discussions with business representatives. The science community will also be invited to join the dialogue on the development of the innovation ecosystem in the near future. And the discussions will lead to future Lithuania's projections, works and perspectives.