How do we differ? 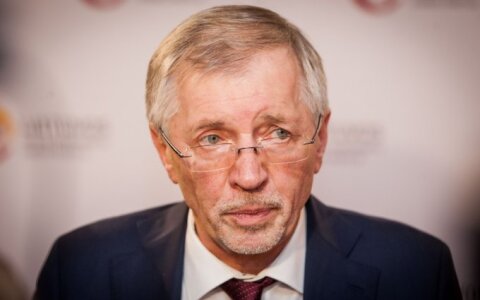 The Social Democratic Labour Party was born, despite a variety of insults, the desperation of lost opponents, the doubts of political commentators. However, when several thousands of people unite, whatever one says, it means that society's need for a new social democratic party exists. And this is what is most important. Why such a need arose is another and interesting enough question, but probably more a question for political scientists.

If it was not for such a need, one could not do anything. On the other hand, the cries of some political parties' leaders that their parties' members are being seduced are just cries. The citizen's right to join a political organization is only a matter of his or her choice. And nobody will lure anyone away from good leaders, because nobody runs from such leaders.

In Lithuanian political life, especially before the last Seimas elections, the card of the renewal was actively exploited, which actually means merely a fear of competition and a wish to reach the top of political careers through a shortcut, on behalf of the aspiring young generation's part. All the country's political parties always nominated youth as well as women, the representatives of various social groups, and not only was there need to antagonise the young and old generations, but also it was rather immoral.

Often this is also an expression of the parties' internal struggles. While a change of generations always happened and will continue to, even despite our wishes, some will fortify their positions in politics, while others, as the several Conservatives showed, will not, but will run to search for other, maybe easier bread.

Today the country's geopolitical situation is not easy, with enough challenges, and everyone apparently agrees on that. And not only because of defence or security threats. The European Union is about to enter the new financial period, the stage of formation of a new European Commission and new European Parliament. Aren't the issues of payments for farmers, funding of Ignalina nuclear power station, energetic independence, infrastructure, which ultimately would integrate us into Europe important?

Let's go back to defence and security. Maybe it is time to stop being hypocrites, if we really think that situation is serious? Do those, who did not vote for 2 percent of GDP for defence expenditures (meaning, the Conservatives), have a moral right to already the next day demagogically demand even higher? And even blaming those, who for the first time in the country's history reached those two required percent for defence? Without speaking about the fact, that under the rule of the Conservatives and the Liberals defence expenditures were unscrupulously cut to a shameful 0.78%.

These and other challenges require a stable government, consensus among the political parties at least on the most important issues of the country's development and strategy, but not little political games, expecting faster electoral dividends. Or even worse, obstructing the Seimas agenda with periodical and unrealizable demands for premature elections. Even the opposition, which demanded for it, usually voted without enthusiasm, as it was evident also this time a month ago in our parliament.

However, the responsibility for the present situation in and outside the country is not the same. The ruling coalition will always have more of it. Sadly, Paluckas' Social Democrats got scared of such responsibility and left, aiming at destroying the ruling coalition and making chaos of the Seimas' work, apparently only to the advantage of the Conservatives and the other rightists.

Social Democracy needs serious discussion. And not only in Lithuania, but also in the entire European Union. If such discussion will not be very serious, but based on labels or some strange arguments on who is the real social democrats and who is not, and if such discussions will be led by the former Conservatives, who run over to Social Democrats, they will not be interesting or important for society. And they would be disastrous for Social Democracy, because the leftist and centre-left political niche could soon be filled by populist parties.

Social Democracy needs to answer to many questions. Who is our voter, what he or she is like, what is his or her social situation, expectations, what are his or her major problems in the face of new technologies, digitalization, robotisation and other challenges? How will the economy of not only Lithuania, but also the entire EU develop further? Finally, what is the future of the EU like, which direction do we support: closer or lesser integration, how to compensate the withdrawal of the United Kingdom and solve many other problems.

We, the members of the Social Democratic Labour Party, are often asked, how we differ from Paluckas' squad. We essentially differ by one apparent aspect. We took the responsibility for the government and such responsibility is the major test for each politician, because everything else is only promises of 'bright future'. Working and solving problems needs to be done today. We did not run away from responsibility, the way our former comrades sadly did to be in the opposition and in the shadow of the Conservatives.

Finally, even if we have different attitudes, let us compete and discuss honourably: with ideas, visions, activities, but not with petty insults or cheap comments. Because still all of us, the ruling coalition and the opposition, we are all responsible for the country's political culture. Voters, I do not doubt, will assess all that. And it will already happen soon – next February in the local government, in May in the European Parliament and presidential elections.

How do we differ?