After 2024 “Independence” may sail away from Lithuania 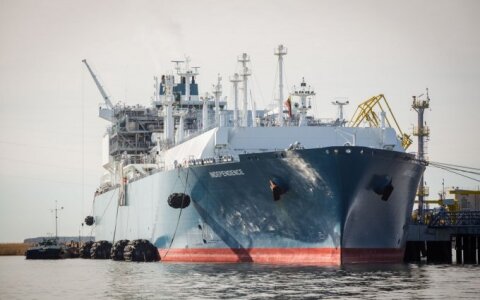 In a study on the future of the liquefied natural gas (LNG) terminal, foreign experts did not assess the prospects of the fertiliser market despite the fact that this branch of the industrial sector accounts for approximately half of the natural gas consumed throughout the country and that total gas consumption in the country depends on it. It also covers the costs of the LNG terminal by applying state regulation measures, lzinios.lt writes.

On Wednesday, in a study presented on the long-term safeguarding of LNG imports, it was confirmed that the Klaipėda LNG terminal, even after 2024 when its lease with the Norwegian company Hoegh LNG expires, would be of economic benefit to Lithuania.

Independent experts have been accessing if it is prudent, in terms of safeguarding economic supply and security, to secure long-term LNG imports for Lithuania after 2024 when the lease with the LNG storage vessel "Independence" expires. Three possible alternatives were accessed – the acquisition of the LNG terminal after 2024 and the extension of the lease by 10 and 20 years.

Minister of Energy Žygimantas Vaičiūnas confirmed that any of the scenarios - the purchase or leasing of the terminal – would already in the near future allow for a reduction in maintenance costs for consumers. The minister promised that the study will be the basis of further discussions "which will be based on arguments, rational points of view with the existence of the terminal accessed not only emotionally but also in terms of very clear figures".

The study will be presented to the government and market participants and is openly accessible on Klaipėdos Nafta website. An independent expert analysis will be presented on Friday to the Government Infrastructure Commission, which will then determine the way forward.

Prerequisites based on trust

At a Lietuvos Žinios press conference on Wednesday, it was noted that the LNG terminal's role as a guarantee of economic security makes sense only if there is a need for gas. In recent years, however there's been a reduction of gas consumption in Lithuania. The writers of the study have based it on the prerequisites that in Lithuania, the need for gas within the coming decades will increase and that gas consumption in Lithuania will tend toward green energy.

Poyry Management Consulting Ltd consultant John Williams responded to Lietuvos Žinios saying that the forecast for gas consumption was based on the forecasts of the European Network of Transmission System Operators for Gas (ENTSOG) according to which the need for gas in the region remains stable. "We use these forecasts because they're a universal source of information on gas requirements in Europe," he said.

Moreover, the writers of the study in his opinion are supported by other sources of gas requirements in Lithuania. International and local forecasts are in line with each other. "One of the reasons why the need for gas in Lithuania should remain stable is that we believe there'll be no significant reduction in gas consumption in Lithuania and other countries. Gas is consumed in generating heating and electricity. Going forward, the main gas consumer there should be an industry company. It's also very difficult to replace gas as a source of fuel for generating heat," he said.

Lietuvos Žinios wrote earlier that in the National Energy Independence Strategy project, which is currently being debated in the Seimas, envisages that that some gas for the centralised heat supply (CHS) system and households will decrease because the total capacity of renewable and local energy-using equipment will increase.

That is partly related to Lithuania's commitment to reaching the goals of the climate change agreement. In the strategy, however it has been contradictorily confirmed that total gas consumption will remain stable and the coming several decades will be important energy resources. It is predicted that the total natural gas consumption in the country will drop from 22 terawatt hours (TWh) in 2017 to 20,9 TWh in 2030 and will then grow to 24,5 TWh in 2040.

Minister Vaičiūnas acknowledged at a press conference that gas consumption from 2012 to 2016 dropped in the country however, this year the trend is toward stabilisation – 22 to 23 TWh of natural gas are consumed in Lithuania annually.

"In the strategy it is forecast that in long-term gas consumption should decrease at a minimum of up to 20 to 21 TWh however it should remain somewhat stable. The reason is that green energy is one of the main directions in which we are heading. In actual fact in the CHS system renewable energy resources (AEI) are decreasing gas consumption. This year in the CHS system 68% of the production of heat raw materials were comprised of biomass. Although we see some of the CHS system going over to biomass, this won't always be the case and so in this sector AEI capacity is in effect exhausted," confirmed the minister.

He cited a strategy and confirmed that for 2040 "even a certain growth in gas consumption" is forecast because of the need to balance electricity production with AEI. "It's also worth mentioning that a synchronised electrical energy system with continental Europe and along with an evaluation of electrical energy production in close perspective, we see a niche for the growth of "flexible generation". It is not ruled out that those electrical power stations could burn gas," argued Mr. Vaičiūnas.

Nevertheless, Mr. Vaičiūnas did concede that exact figures and the energy balance sheet are currently not available as they are being revised.

Lietuvos Žinios pointed out another important aspect in the use of the LNG terminal. The Lithuanian gas market is seemingly fragile and not sustainable because of its structure: half of all gas consumers belong to one branch of the industry, to be more precise, to one company – Jonava Nitrogen Fertiliser Factory. If for whatever reason this company were to reduce its consumption of gas, the total gas need would halve. In such a case financing of the LNG terminal would also be disrupted because Achema pays over a quarter of all taxes from which operation of the "Independence" is financed. For 2018, from the more than 86 million euro in taxes scheduled, Achema will pay 24 million in LNG terminal tax.

Did the writers of the study access the fertiliser industry trends for the years after 2024?

Expert John Williams says that only specific low-gas need scenarios are being considered. There is a scenario where the benefit of the LNG terminal would be seen in the diversification of gas supply sources and a reduction in price. "But the study specially did not seek to answer questions on the future of separate sectors. We rated the sensitivity around a possible drop in gas consumption in general but nothing specific or concrete about the fertiliser industrial sector...," noted Mr. Williams.

Minister Vaičiūnas acknowledged that gas consumption in the fertilised industry is substantial – branches of this industry constitute about one-half of all the consumers of natural gas throughout the country. "In actual fact the consultants themselves had discussions with Achema in this regard. In our opinion, of course we cannot guarantee what the perspectives will be 20 or 30 years down the line. In this study in which a "sensitivity" analysis has been done, one can see that the extent of the benefit of the LNG terminal depends, from the point of view of securing its long-term supply, on the quantity of gas. This is why I think that it is important to be flexible when it comes to future use of the LNG terminal. We'll see what decisions are taken later," said Mr. Vaičiūnas.

As the number of gas consumers decreases, taxes on the LNG terminal unavoidably increase. Minister Vaičiūnas emphasised that the government will in any case seek to decrease maintenance costs of the LNG terminal – either the storage vessel will be purchased or it will continue to be leased. "The maximum reserve or the opportunity to reduce the cost of the terminal would be based on a decision taken earlier, that means before 2024," stated Mr. Vaičiūnas.

Gas consumption in the country is decreasing partly because of maintenance of the terminal is a burden for gas consumers. Over the last three years tax paid by the gas consuming industry have grown by almost 19 million euro – from70 million to nearly 89 million euro in 2017. This year around 87 million euro in security components are scheduled to be collected. Losses sustained by Litgas account for approximately a quarter of these funds.

Decision to be taken this year

"This study is the master document by which we can start thorough discussions in Lithuania. Klaipėdos Nafta in its turn will look at all possible alternatives and evaluate the economic and technical aspects," said head of Klaipėdos Nafta Mindaugas Jusius.

The plan for implementing the government's measures foresees final decisions, which should be accepted by the end of 2018, regarding the long-term safe-guarding of the LNG supply after 2024 and a reduction in its maintenance costs (before the lease expires).

If a decision is made on the storage vessel after 2024 when its lease ends, its repurchase should amount to approximately 121 to 160 million euro. The writers of the study based this on "publicly available information" because the actual repurchase price is confidential. Not even Klaipėdos Nafta's managing director Mindaugas Jusius could determine it.

There is as yet no response regarding immediate payment of the repurchase price, what instalments would be and over what period of time it will be distributed to consumers or if because of that the price of natural gas would rise.

"We don't really know all of the details but the fact is that the consumers cannot bear the brunt of it all in one year. A clear-cut charge to consumers should be set consistently. A stable price for consumers should allow for maintenance and repurchase of the vessel and for an extension of the lease", promised Mr. Jusius.

Off maybe to other lands

Minster Vaičiūnas believes that that the study sends out a clear signal that the long-term safeguarding of the LNG supply for Lithuania and the region is important and necessary and that the terminal should benefit not only Lithuania but also Estonia, Latvia and Finland. A specific synergy of possibilities for using the vessel and the benefit it gives serve as an instrument of "pressure" allowing for an 11 to 20 percent reduction in the price of gas.

The minister acknowledged that security of the supply will ensure a gas connection in 2021 between Lithuania and Poland and that the LNG terminal, at the time of the connection, would remain a price stabilizer for a long time. If Klaipėdos Nafta repurchases the storage vessel from Norway after 2024, varied ways of using it will be discussed taking into account the market.

The Independence currently belongs to the Norwegian company Hoegh LNG from which Klaipėdos Nafta, the administrator of the Klaipėda LNG terminal, is leasing it. The state concern is leasing the vessel at 56 million euro per annum and over 10 years will pay in total about 560 million euro. Hoegh LNG is not only leasing out the vessel with crew but also offers maintenance and operational services.

"The contract will expire in 2024. Klaipėdos Nafta has the option of acquiring the vessel for an agreed price or refusing it. If Klaipėdos Nafta decides to acquire the vessel, the new owner would make all the decisions regarding deployment of the vessel," explains Mr. Jusius.

Reacting to Lietuvos Žinios's questions and remarks on the sustainability of the gas market, Mr. Jusius said "the vessel could be deployed in another country and continent or used as a LNG cargo carrier". We see that around the world there is a big demand for this sort of thing. This is because of the rapidly growing world LNG market," said the head of Klaipėdos Nafta.

After 2024 “Independence” may sail away from Lithuania