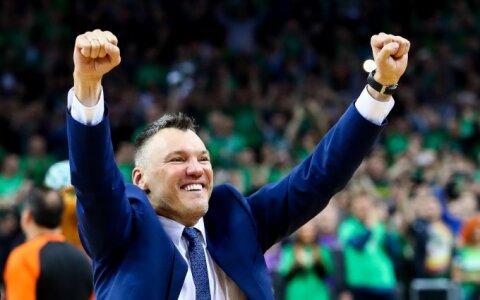 "Šaras [Šarūnas] has proved that major victories are won not when your pocket is full but when you have a big heart. But people are made honorary citizens of Kaunas not for their basketball victories but for who they are outside the court. Šaras is a true Kaunas resident, proving his love and loyalty for the city and its people with his deeds, not words", Matijošaitis said.

The proposal followed Zalgiris Kaunas's victory against Olympiacos Piraeus that led the Lithuanian club to the Euroleague Final Four for the first time since 1999.

The Lithuanian basketball team headed by Coach Šarūnas Jasikevičius won its playoff series against Olympiacos Piraeus in Game 4 at the packed Zalgiris Arena in Kaunas on Thursday.

The Final Four will be played in Belgrade on May 18 to 20.