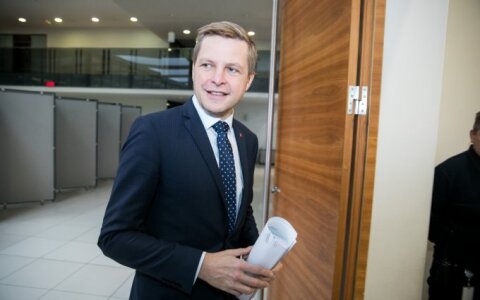 Vilniaus Mayor Remigijus Šimašius says that he is on Russia's blacklist of Lithuanians barred from entering the country.

"I've been notified that I'm among those who are not welcome in Mordor," Šimašius said on his Facebook page on Monday, likening Russia to the fictional evil land in J.R.R. Tolkein's "Lord of the Rings".

"The feeling is mutual," he added.

The mayor says that he took his decision not to go to Russia more than a decade ago, adding that he drew negative reaction from Moscow back when he served as Lithuania's justice minister.

The Russian Foreign Ministry said on Saturday that in response to the so-called "Magnitsky List" drawn up by Lithuania, it had banned entry to "the most hostile citizens of Lithuania, including local politicians, parliamentarians and political analysts".

Journalists Rimvydas Valatka, Andrius Tapinas and Dovydas Pancerovas said on Friday that they had been blacklisted by Russia.

The persons on the list say they have been informed that they will not be allowed into Russia for five years.

Sergei Magnitsky was a lawyer who died in a Russian prison in 2009 after uncovering a tax fraud scheme.

Lithuania's Magnitsky list, which was made public, had the names of 49 Russian nationals. Another 21 names were added later in solidarity with Britain over the poisoning of a former double agent.