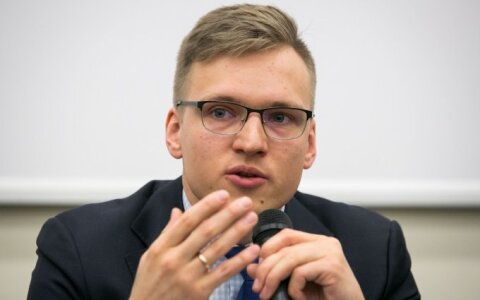 The phrase that the European Union is the cornerstone of Lithuanian geopolitical security, which is often taken for granted, must be justified by answering the question, what sort of EU could actually perform such a role and when are its decisions potentially harmful to our state interests? Such a question is being raised not only at a good time and is justified, but is also necessary because currently EU leaders are deliberating on what direction the European unification project should head, according to a comment by Vytautas Keršanskas posted on lrt.lt.

It was left to the European Commission to set the tone for this discussion, following its presentation of five potential future scenarios for the union a year ago: from returning to just the unified market, to moving toward federation. While presenting them, EC head Jean-Claude Juncker emphasised a number of times that it is necessary to continue deepening European integration. While the word "federalization" is often left unsaid in order to avoid criticism from detractors, factually the EC head is seeking to strengthen the power of European institutions in increasingly many areas, including foreign and security policy.

Related articles
Generation and value changes in Lithuania: a few insights through the prism of European Social Survey
After 2024 “Independence” may sail away from Lithuania

As such this weekend's benefis by J-C. Juncker is to be viewed very seriously because it reveals the challenges arising regarding the implementation of such a scenario. In an interview published in the Dutch daily Trouw on Saturday, Jean-Claude Juncker bluntly stated that the European security architecture is inevitable without equal Russian participation, at the same time expressing regret over being unable to call his long-time friend Vladimir Putin a partner due to "Cold War rhetoric." No, not because the Russian leader's country is enacting aggressive foreign policy and seeking to redraw European borders. Instead, because according to J-C. Juncker, the West is inclined against Russia, does not view it as an equal power and uses unsuitable securitised rhetoric.

You could expect such rhetoric from Kremlin propagandists, but not from a representative of one of Europe's most important political offices.

Because the structural power of the major EU states often becomes the factor, which decides EU policy, the European Commission is left with the important role to ensure that the interests of smaller members are not trod on. This is what the expectation was regarding the Nord Stream 2 gas pipeline, which benefits Russia. One must admit, for a long time the European Commission performed its role, promising to prevent this project from seeing the light of day. Unfortunately, we see that the position has changed and recently leaked documents reveal intentional EC inaction, which allowed Gazprom to continue its politicised natural gas sales in Europe. Also for Russia to finally succeed in the European Commission greenlighting the second gas pipeline at the bottom of the Baltic. After the thoughts expressed by J-C. Juncker on Saturday's interview, the EC head's role in this story demands further attention and investigation.

While his statement could be dismissed as simply the misguided stream of consciousness from a politician concluding his term, it would be irresponsible to do so because the position he expressed has a far broader support base among EU members.

As such, the European Union's future scenarios linked with European institution's increased power or unilaterality in decision-making do not suit Lithuanian interests. This is because despite active Eastern members', including Lithuania, efforts to encourage an adequate view of Russia and its policies, the political line, which refuses to do so remains broad.

The guarantee of Lithuanian geopolitical security is NATO, which ensures a firm transatlantic factor in European security policy. Any initiatives to involve Russia, create a joint security architecture are an absolute threat to Lithuanian national security.

The European Union is strengthening our political, economic and infrastructural establishment in Western society, however when talks turn to geopolitical security, the union's future scenario deliberations and the foreign and security policy factors coded in them demand exceptional caution in considering their impact on our interests. A common understanding of threats and reaction to them must be achieved in one voice. This demands a common understanding of geopolitical and historical context. The European Commission head, who will travel to celebrate the 200th anniversary of Karl Marx's birthday on May 5, is clearly unable to do so.