Not our war – not our Victory Day 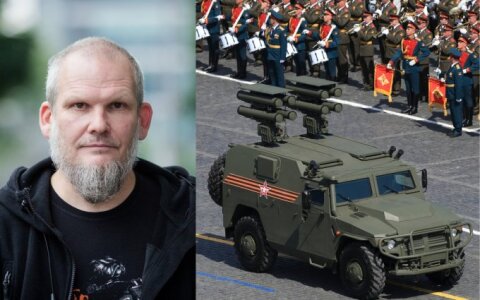 I don't read my wife's text messages, I don't break into my neighbour's post boxes, so out of principle, won't read the president's letters. If there were something important to us all in there, due to which the political system should crumble and Dalia Grybauskaitė should meet Rolandas Paksas' fate, it would already have been broadcast by those, who read first. Meanwhile now the supposed reading would only be a simple satisfying of curiosity, as if peeking through the curtains at someone else's kitchen and complaining about their unwashed dishes.

This is especially true with such an end of spring, where nature is hurrying to get back for the still fairly winter-like March and April: plums and cherries are still in bloom, apple trees have started to bloom as well, as have olive bushes, the fields gone yellow with dandelions and in the evenings, the cries of birds compete in the swamp with a chorus of frogs. There is no room for sadness and doubt in the bright May sky, the abruptly starting summer will end in a few months anyway.

I was not in time to congratulate leftist voters with their celebration on May 1st, but as sometimes is said, better late than never. When I run over a pile of dog faeces with my lawnmower, the springtime smells of the yard obtain new accents. Such a comparison is very suitable for the May 1st celebration, which combines the Soviet era faces, the worker's litany of St. Joseph, as well as the boring declarations of well fed, moustached trade union figures.

However much you would like to distance yourself from communist crimes, the Russian Social Democrat Workers' (Bolshevik) party, Lenin with Lev Trocki and Josif Stalin, Mao and the Khmer reds were true implementers and creators of leftist ideology, unlike the contemporary opportunists, who betrayed the working people and focused on representing the rights of minorities and marginalised social groups in the bourgeois state apparatus. Can those who lost faith in the proletariat's role and relinquished revolutionary struggle still call themselves leftists? Call yourself what you will, only most important – do not yield the most important leftist tradition to focus most strength on settling scores among one another, which party, Gediminas Kirkilas' or Gintautas Paluckas' is the more real social democrats.

Another important date is nearing – Victory Day on May 9, celebrating victory in the Great Patriotic War. Even if the war ended a day earlier and is called the Second World War across the world and the Soviet Union, which sacralised the victory in it, ceased to exist in 1991. By the way, it started the war not at all as an innocent victim, but as an aggressor, invading Poland alongside Nazi Germany.

But does this matter to, for example the Russian living in Poland, who scrawled the name of the T-34 tank on a rusted fifth generation German BMW from a few decades ago, alongside the slogan "To Berlin!" and waved the Russian tricolour. Stalin's NKVD would have taken him to a firing squad during the Second World War and it was only returned by pro-Western democrats, who deconstructed the Soviet Union alongside Boris Yeltsin.

The question of how we in Lithuania should react to fellow citizens celebrating Victory Day remains pertinent. The more we distance ourselves from it, the easier Kremlin propaganda can portray the Baltics as reborn Nazi allies, responsible for the Holocaust and seeking to once more dress their youth in SS uniforms and send them to the East front. Such propaganda works well for domestic Russian consumption, when World War 2 era Germans, contemporary NATO, Ukrainians, Georgians and the Baltic States are all grouped together... Intimidated by their government, the Russians will bear all the difficulties and the thieves of Putin's regime on their back, for of course what matters most is to avoid war.

However, we ourselves need not allow such falsified interpretations of history establish itself in the public sphere. Firstly, it would be unfair to Lithuanian citizens who unfairly became victims during wartime, regardless of whether they were shot to death during the first Soviet era, the Holocaust, whether they died in the forests, opposing the occupiers or whether they died from starvation and cold in exile. Neither party wars any better in the existential struggle between the two aggressors of World War 2, victory or loss do not erase the war crimes committed. We can only identify with the partisans, who acted in the name of the Lithuanian republic and any military detachments of the occupiers, however much they may have wanted to describe them as "Lithuanian", have nothing to do with our state.

We cannot celebrate May 8 or 9, 1945 as the end of war because the Second World War ended here on only August 31, 1993 at 11.45 PM, when the final military detachment of the occupiers withdrew from Lithuania.

Not our war – not our Victory Day