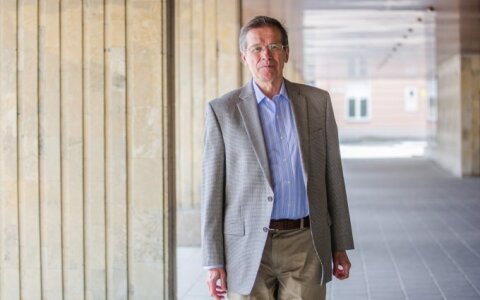 When you're bored or don't know what to do, you look for ways to spend time. Youth look for leisure, Lithuanian politicians – real or supposed scandals they can use against their opponents and enemies.

Last week the Seimas was working very hard. The correspondence between President D. Grybauskaitė and former Liberal party leader E. Masiulis was at the centre of attention.

Correspondence published by Lietuvos Rytas featured the president writing that correspondent T. Dapkus "is talking nonsense" about candidate to prosecutor general Evaldas Pašilis and proposed to "convey greetings" to the head of MG Baltic Darius Mockus, who owns the LNK television, that he would "withdraw his hound."

Related articles
Kęstutis Girnius. Restraining the president
Not our war – not our Victory Day

Upon this information being released, a wave of outrage rippled out. Seimas Legal Affairs Committee chairwoman A. Širinskienė declared that the released correspondence shows that the president was coordinating the candidate with the MG Baltic business group, which is intolerable in a country with the rule of law and raises many questions.

The MP stated that perhaps a parliamentary inquiry should be performed. It was not a lone voice. Her party leader R. Karbauskis stated that first it will be investigated whether the correspondence is authentic and expects to receive answers from the Seimas' servers.

Based on the principle of the more, the better, he stated that not only Masiulis', but also other politicians' emails might be requested. In terms of comments that correspondence is private, Karbauskis responded that the senders are officials.

I did not know that officials have no right to privacy. Karbauskis could also have added that if a person hasn't sinned, breached the law, if they are innocent, they should not care, if their letters are read because they have nothing to hide. Once upon a time, this was the justification of KGB actions.

LSDP group prefect Juozas Olekas joined the chorus. His party thinks that the raised questions should be answered because the correspondence is not of a private nature.

According to Olekas, wording which "oversteps moral boundaries" appears in the correspondence. Outrage also appeared due to the term "hound". From Olekas' statement you could think that either he has a very sensitive, easily broken sense of respect or believes that the president should always talk like a nun or primary school teacher.

But Olekas isn't that naïve.

Why is there so much concern over the term "hound"? Hounds are after all not mutts or some other strays. It is a noble breed of dog, used in Lithuania for hunting since the 16th century and mentioned in the Second Statute of Lithuania.

Furthermore, a hound is stubborn, resolutely pursues its quarry, does not allow itself to be lured away. The English language even has the phrase "dogged reporting," which is applied to correspondents, who dig up through resolute work that, which their colleagues are unable to.

Dapkus himself was not upset about the president's wording, correctly viewed it as praise. On the other hand, in an interview about the correspondence Grybauskaitė claimed that "unfortunately there are journalists, who become tools or interest groups' representatives, lobbyists" and "overstep the boundaries of journalistic ethics."

If these remarks were toward Dapkus, he could be insulted because it is implied that they work unfairly, enact someone's orders.

It is clear there's nothing to investigate because the president did nothing bad despite acting carelessly. There is no basis, especially with no proof that there could be suspicions of "coordinating the prosecutor general's candidacy with interest groups," that MG Baltic support was requested as Širinskienė claims.

The president's suggestion to "convey greetings" to Mockus should be viewed as a one-time remark, not an attempt to make Masiulis into an accomplice in seeking to influence Mockus.

The situation should be viewed more seriously if other correspondence surfaces, for example written in a few weeks, where there are inquiries for Masiulis, whether he conveyed the greetings to Mockus, how Mockus reacted or if Mockus is inclined to consider the urges and such. But so far such emails haven't been found and I am rather sure they never existed.

Nevertheless, this bloated artificial scandal says a little about the president. It is surprising that Grybauskaitė contacted Masiulis via email.

She must know well that email is permanent and once sent it cannot be destroyed because the recipient may keep it, as can various servers and who knows what else.

In this respect, telephone conversations also have flaws. They can be wiretapped (the president is well informed of this), the other party could secretly record them.

If you want to ensure confidentiality, it is best to simply talk in person, especially when from their reaction you can tell, how they are responding to remarks and proposals. The simplest means to tell Masiulis something would have been to invite him to the presidential palace and talk face to face. After all, he wasn't a leper back then.

The president doesn't do so because it's not her way. She keeps interactions with politicians at a minimum. Perhaps she dislikes them, views them as incompetent, perhaps she thinks that the dignity of the head of state demands to maintain distance, perhaps she overall struggles to interact with people. Sometimes the impression is made that her world is solely Daukantas Square and the house in Turniškės.

The impression could be mistaken, but if I am mistaken, then I am not alone in it. Her links to politicians are neither normal, nor earnest. Due to this, the president's efficiency was reduced, as was state governance. And the carelessly worded email created a scandal to which Grybauskaitė reacted poorly. Initially having her advisor talk in her name and only with outrage rising, conceding to an interview.

If the president's actions weren't praiseworthy, then Širinskienė and her colleagues bring shame to the parliament. The country has so many unresolved problems, so many unachieved, urgent tasks, so many unaccomplished electoral promises, but they are dealing with minor details. Perhaps because they can't do anything else.