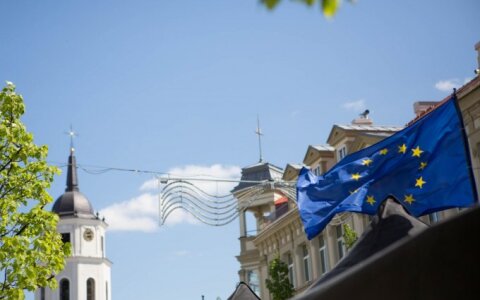 We mark twenty five years since the entry into force of the Maastricht Treaty introducing the common foreign and security policy of the European Union (EU), to which Lithuania actively contributed from the very outset, as an associate member, and during the past fourteen years, as a full-fledged EU Member State.

Alignment of Lithuania's foreign policy with that of the EU has been a reality for over two decades now. Lithuania is very active in this field. External observers often say the country is hyperactive in this respect. For the purposes of this article, we will try to assess the extent to which Lithuania affected the EU's foreign and security policy and was affected thereby.

Belarus. Even prior to its EU accession, Lithuania enriched the agenda in Brussels with Belarus, offering a new approach to the issue. All the funds from Brussels used to land directly in Lukashenko's pockets. However, Lithuania's accession opened up new opportunities for the democratic forces in Belarus to benefit from Brussels funding as well. An excellent example of the efforts pooled to build a truly European future for Belarus is the European Humanities University based in Vilnius, which will open access to its new premises in the Old Town of Vilnius this week. However, we have to admit Lithuania's failure to make a real impact on democracy in the country. Sadly, this is evidenced by the launch of the first unit of the Astravyets NPP, expected to take place next year. As long as the EU fails to condition its relations with Belarus on the principles of freedom, democracy, and closure of the Astravyets nuclear power plant, Lithuania's impact on Belarus in Brussels will remain marginal.

Eastern Neighbours. The signature and entry into force of the EU Association Agreements with Georgia, Moldova and Ukraine is a significant achievement of Lithuania's foreign policy. The EU Eastern Partnership Summit in Vilnius in 2013 and the Maidan Revolution were historic turning points in Ukraine's relations with the EU, to which Lithuania largely contributed. But for these historic events, Ukraine would now be like Belarus. Concerted efforts of the Lithuanian President, the diplomatic corps, the Seimas, and a large number of non-governmental organisations and other friends of Ukraine have played a crucial role in opening the window of European opportunities to Ukraine. In fact, the roots of Maidan can also be traced back to Vilnius. At a meeting of the Parliamentary Forum for Democracy under the leadership of Emanuelis Zingeris on 28 November 2013, Petro Poroshenko, future leader of Ukraine, and contemporary Ukrainian leaders agreed to sign the association agreement. However, Viktor Yanukovych, once in Vilnius, refused to sign the document. We all know what happened next. In the final analysis, the EU would never have forged a proactive eastern policy but for Lithuania, which, in tandem with Poland and Sweden, succeeded in persuading other major EU capitals that the EU's enlargement to the East as a process of creation of an area of freedom and territorial integrity was not yet complete. In this respect, however, it has to be recognised that Federica Mogherini, the current architect of EU foreign policy, is failing to see the future EU membership of Georgia, Moldova and Ukraine and democratisation of Belarus as a worthy objective. After all, turning a deaf ear to these countries brings fewer headaches for the EU and does not impede good relations with Russia. The EU's inability to build a strategy on the associated eastern neighbours is daunting. This was not the case with, for example, the Baltic States, which received the prospect of EU membership back in 1993, or the Balkan countries in 2003. Russia, no doubt, perceives this lack of strategy as a sign of the EU's weakness and a green light for occupation of Ukraine, Moldova and Georgia. In 2008, Lithuania was the only country in Brussels to refuse recognition to what was in fact Russia's aggression against Georgia. Our prophecies on occupation-minded Russia proved right later, when Crimea was occupied. As a result, Europe had to pay a high price for having turned a deaf ear to Lithuania.

Russia. The situation is similar, or even worse, with respect to Lithuania's impact on EU foreign policy on Russia. After the EU accession, Lithuania, coupled with Poland, sought to warn Brussels against Putin's government. Vladimir Putin, a former KGB officer, took over power in Russia in 2000 and soon embarked on consistently dismantling what had remained of freedom and democracy in the country. The EU kept silence all through, failing to listen to its Lithuanian and Polish counterparts blocking new partnership agreements with Russia that had the potential of further reinforcing the new Russian dictator bent on sapping any reform and democratisation in his country. We made it clear at the time in Brussels that if nothing was done to preserve freedom in Russia, quite predictably, sooner or later Russian tanks would call on Lithuania's and Poland's door. Because democracies usually stay peaceful, whereas wars are predominantly declared by paranoid dictators in fear of losing their power. We made ourselves clear, but no one would listen. This is still the case now. Admittedly, the EU has, albeit slowly and reluctantly, imposed mild sanctions against Russia. However, Jean-Claude Juncker, President of the European Commission, and Kremlin's numerous underlings both in Brussels and even in Lithuania continue glorifying the crime-prone Russia and calling for the renewal of a dialogue with Putin. This would, in fact, justify all of his occupations and annexations and open up opportunities for new ones. Only a handful of EU Member States, including Lithuania, are demonstrating leadership by introducing the Magnitsky Act into their legislations and thus banning Kremlin's thieves and killers from access to their territories. Adoption or failure to adopt this act is a litmus test, demonstrating the strong and far-sighted policy of Lithuania, Estonia, and the UK, bent on leaving the EU. All other Member States are either flirting with Russia or downright prostituting themselves.

Energy. The common EU policy on energy is a tangible success brought along through Lithuania's efforts. But for Lithuania and Poland, it would not have been included into the 2007 Lisbon Strategy. In 2006, the Energy Security Summit took place in Vilnius, with the participation of the Polish President Lech Kaczyński and US Vice-President Dick Cheney. This was a significant breakthrough. It stopped Putin from using energy as a weapon against democracies in the neighbourhood. We paid a high price for this, though: Putin discontinued the delivery of crude oil to Lithuania. Some Lithuanian politicians are seeking to renew it now. They are probably expecting to bring the pre-2006 energy dependence on Russia back. Under President Dalia Grybauskaitė, thanks to EU instruments and support, as well as thanks to support and technology from the USA, Lithuania managed to break free from energy dependence. We will see shortly whether this political course will be maintained after the 2019 elections. Putin is obviously willing to undermine the ambitious EU external energy policy by supporting the geopolitical Nord Stream pipeline and Astravyets NPP. The EU, meanwhile, is unable to resist, as a sad consequence of the lack of a more ambitious EU energy policy. Lithuania's quislings are also looking forward to bringing Lithuania back to dependency on Russian gas, oil and electricity, in exchange for the throne in Vilnius, in which case they will have to split the wins with the Kremlin.

Transatlantic relations. The EU's transatlantic policy also has its shortcomings. Brussels, of course, is not the only one to blame. The EU-US free trade agreement would have brought most benefits to Lithuania. Yet the agreement was not signed. Not only because of changes in Washington, but also because of the red-green coalition governments inspired by Moscow and Beijing. The current governing coalition in Lithuania was also affected, or maybe even brought into being by them. The green and red hysteria in the Lithuanian Seimas against free trade with Canada, which is another consistent Lithuania's partner, shows that the policy shift in Washington is not the real cause in many cases where internal policy changes happen in Lithuania. The shrinking foreign direct investment and the Prime Minister's failure to come to Washington, London, and Ottawa are telling much more than words. In turn, the historic successful visit in Washington of the leaders of the Baltic States shows that despite the red-green revolutions, we were and will continue to be transatlantic policy leaders. Unless, of course, the Daukantas square falls into the hands of the Kremlin.

EU foreign policy in Iran, Syria, the Middle East, the Mediterranean, Israel, and EU policy on refugees. No comments. Huge sums of money are wasted on misguided purposes. While the EU is an indisputable global leader on contribution to development cooperation, our role is still insignificant compared to the US insofar as support to democracy and freedom in the world are concerned. Moreover, Lithuania, with a minimum budget of the Ministry of Foreign Affairs and one of the lowest development aid portfolios in the EU, is still talking the talk on freedom and democracy without actually walking the walk. We have specialised and will continue to specialise in foreign policy. Lithuania has been and will always be the leader on foreign policy because of its geographical position, its history, and its experience. But whether we will manage to defend and consolidate our region, our freedom and democracy and the freedom and democracy of our Eastern neighbours, to seize the historic opportunity given by the current influence of our diaspora not only in the US, but also in the United Kingdom, and counter the Russian aggression by promoting our own foreign policy agenda in Berlin, Paris and all the most influential EU capitals, is still a question. Time and election results will show whether we will or will not fall prey to the foreign policy pursued by Juncker and Mogherini.

Needless to say, we deserve acclaim for our role during Lithuania's fourteen years of EU membership. Even so, we should not take freedom for granted. At the same time, we need to understand that EU membership is not a guarantee of paradise on earth, yet an opportunity for us to fight and defend our interests, our dignity, our country's wisdom and experience. After all, we were the first in Europe to gain this experience, as we forged the counterpart of the EU back in the Middle Ages and stood proud in defence of the area of freedom from the Baltic to the Black sea.