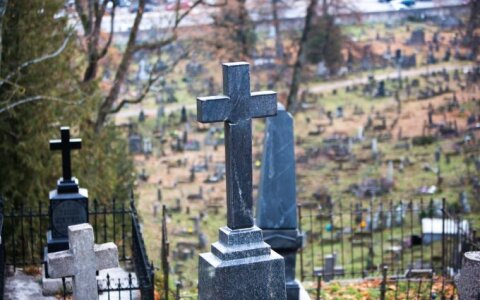 A Lithuanian government commission has decided that the remains of participants of the 1863-1864 uprising against Tsarist Russia should be buried in Vilnius' old Rasos Cemetery next year.

The remains were discovered during archaeological excavations on the Gediminas Hill in downtown Vilnius last year.

"A chapel in the Rasos Cemetery was chosen from two options," Government Vice-Chancellor Deividas Matulionis told reporters on Monday.

"We can't say now how it will look exactly, but it will be a kind of pantheon of the 1863 uprising leaders," he said.

According to the official, the other option was to bury the remains in the capital's Church of St. Philip and St. Jacob near Lukiškes Square where the uprising participants were executed by shooting or by hanging.

The religious burial ceremony will most likely be held in July or August 2019 and is planned to be organized together with Poland.

"We should do a joint event with Poland, because this event is as important, or even more important historically, to Poland as to us," the vice-chancellor said.

He added that Belarus could also join the event, although it does not seem to show much interest in these historical finds.

Historians say that 21 participants of the 1863 uprising were buried on the top of the hill in downtown Vilnius. The remains of 17 people have been found to date.

The remains are believed to include those of Zigmantas Sierakauskas (Zygmunt Sierakowski) and Konstantinas Kalinauskas (Konstanty Kalinowski).