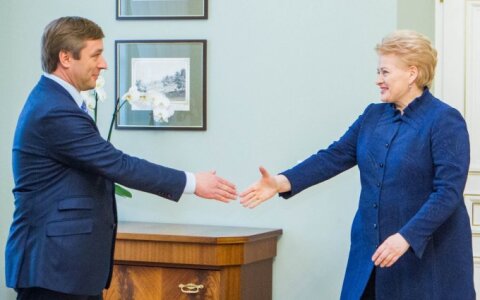 Lithuanian President Dalia Grybauskaitė is trying to direct attention from the political corruption case by casting a shadow with its statements calling on members of the ruling parties, active in the business area, to "very seriously consider" whether to stay in the parliament, Ramūnas Karbauskis, leader of the ruling Lithuanian Farmers and Greens Union, says.

"I do understand that the president has joined the game when attempts are being made to direct attention with doubts and accusations from the political corruption sandal directly involving the president," he told journalists at the parliament on Tuesday.

The Lithuanian president said earlier some lawmakers are doing business, with some of them doing it secretly.

"We see Seimas members doing business both openly and secretly, and these are potential violations of the Constitution," Grybauskaitė said in an interview with the Žinių Radijas news radio on Tuesday.

Related articles
Agrokoncernas says it doesn’t seek to influence politicians
A spider’s web none dared touch for a decade: how MG Baltic aimed to conquer the country

She said so answering the question as to whether the existing political situation, when a dominating political force in the Seimas is led by a business owner, would allow setting new rules aimed at restricting improper business influence on politicians.

The Karbauskis-led LVŽS has the largest number of seats in the Seimas. He's the owner of the Agrokoncernas business group.

Karbauskis says Agrokoncernas cannot be compared to the MG Baltic business group, one of the suspects in the political corruption case.