A. Ažubalis. The Kremlin is evil, but its friends are ok, aren’t they? 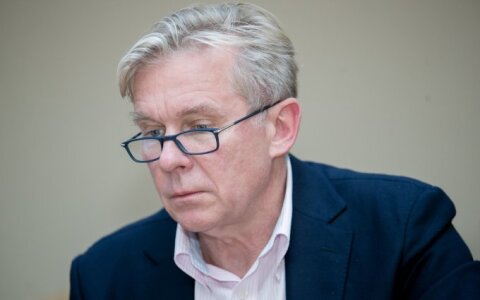 Three years ago, instead of suspending or discarding the Iranian nuclear programme altogether, the major European and global countries, together with the then US President, Barack Obama, frivolously entered into an agreement with Iran on limiting its nuclear programme. The programme was to be limited by 2025 in exchange for cancellation of the functional and painful economic sanctions on Iran.

After lengthy negotiations, nobody dared to acknowledge that the agreement was a 'one-way street' case, solely beneficial to certain European business companies and Iran. According to the US State Department, regardless of the concessions, Iran nevertheless continued its nuclear programme and went on developing intercontinental ballistic missiles. In the meanwhile, the agreement signed in 2015 severely limited opportunities of diplomatic response to the illegal actions of Iran.

Related articles
Khodorkovsky on Lithuanian TV: fall of Putin's regime possible at any time
Leading German MEP calls on Lithuania to choose Europe in disputes with US

International treaties signed by President Obama were revised as a result of the rise to power of the new US President and his team prioritising pragmatism in foreign policy rather than adherence to meaningless agreements. It was noted that a number of agreements, like the said agreement with Iran, maintained and legalised the existing status quo instead of providing solutions. The ineffectiveness of the agreements and failures to honour the obligations under the agreements prompted the US administration led by Donald Trump to withdraw from the agreements and to propose signing new ones.

The US Administration's withdrawal from ineffective international agreements immediately triggered negative reactions in Europe. In the case of Iran, the terrorist attacks carried out by Hamas, whose fervent supporter was Iran, were largely forgotten, just like the anti-Israeli policies of Iran and its army with mercenaries fighting against allies in Syria. Notably, after 2015, major EU Member States began active penetration into the Iranian market. With this in mind, only one question was on the agenda after the US withdrew from the said treaty: what will happen to the businesses of major EU Member States? Companies such as Airbus, with a USD 19 billion deal in sales of 100 aircraft to Iran Air, Moller-Maersk, Total, with a USD 4.8 billion deal on sea exploration in South Pars site, Sanofi, Renault, and Peugeot immediately expressed dissatisfaction with the actions of the US. Likewise, dissatisfaction was voiced by politicians of major European states and high-level EU bureaucrats, who even raised the idea of responding to the US by dissolving the EU-US partnership.

Non-proliferation and peace in the Middle East may seem distant topics that do not directly involve Lithuania. However, the said situation once again raised a large range of essential questions that may be addressed to Lithuanian foreign policy makers. Firstly, Lithuania failed to properly analyse the draft agreement, its consequences, and the ongoing debate in a number of countries on the matter. Representatives of the Ministry of Foreign Affairs, when asked about any studies on the agreement with Iran (JCPOA), an agreement publicly supported by Lithuania, replied that no studies were available. The Policy Planning Department of the Ministry on Foreign Affairs, which was previously in charge of tasks of this nature, was eliminated ("optimised") at the beginning of this year. Likewise, the Economic Security Department had been dissolved in the previous year. Truth be told, a general overview of the agreement was presented to the Seimas Committee on Foreign Affairs in April 2015. Back then, Vice Minister of Foreign Affairs, Andrius Krivas, insisted that 'everything will be fine'. However, owing to the lack of an appropriate analysis, a clear Lithuania's position on the agreement with Iran is still obviously lacking. After all, reiterating the concerns of some Europeans cannot be considered to be a national position.

Secondly, the reaction of major EU MS to US' withdrawal from JCPOA and the ensuing reorientation of EU's foreign policy towards threatening the US in order to protect European businesses that had invested in Iran is raising a dilemma to Lithuania on account of the values to which we adhere in our speeches and which guide our foreign policy. On the international stage we often work hard to convince our partners that a radical position on dictator-run countries, such as, for example, Russia, is necessary in order to ensure security and put an end to arbitrariness inflicted by their regimes. However, the reaction of Heads of State and Government of major EU countries to the US withdrawal from the Iranian agreement shows that a significant financial interest prompts the EU to make friends with Iran's regime (incidentally, supported by Russia). Is this a way to say that the Kremlin is evil, but its friends can prove to be good? What arguments are we going to use later in trying to convince the US and the EU to extend sanctions against Russia? After all, there are still some in Europe who say that sanctions against Russia are also economically counterproductive. By supporting the position of major European Member States on Iran, a country that, according to US agencies, fails to comply with its obligations, we are losing sight of one of our most important foreign policy principles to refrain from cooperation with dictators and criminal regimes for financial gain or other benefits. Or should we see it in other light? Might this be proof of the fact that the establishment of diplomatic relations with Cuba under the dictatorship of the Castro dynasty and support to the revocation of EU sanctions to Lukashenko by Lithuania were not mere disgraceful misunderstandings?

Thirdly, the sentiment that is now popular in Europe and that favours dropping sanctions against the Kremlin as well as the infantile anger of top European politicians and even leaders with Washington's administration that prevents 'doing business' with dictators and religious extremists will, sooner or later, lead Lithuania to seriously considering its European and transatlantic security policy. We cannot continue navigating downstream and seeking to please everyone. At the end of the day, we will fail to appease anyone. Lithuania is inconsistent when it supports the EU's resolution on Jerusalem at the UN, publicly says that it will not shift its Embassy to Jerusalem and even shamefully abstains from participating in the US Embassy opening celebration in Jerusalem on the one hand, yet on the other hand, sends Minister Linas Linkevičius to Washington to advocate on the importance of bilateral relations with the US and to request the Trump administration for greater US military presence in the Baltic States.

For a total of 70 years, Europe and the US have been able to agree on what constitutes enemies and friends. Today, it is imperative that we oppose any external attempts to break this unity. We also need to keep abreast of developments within the EU. The EU should not project itself as a euro-centric regional force. Instead, Europe should be a transatlantic power. The preservation of this unity is important for our own security as well. When Germany as the largest and most powerful EU country plans to increase its defence spending to as few as 1.5 per cent of GDP by as late as 2025, one may deduce that the EU's security can only be built on a strong alliance with the US. The EU should not overestimate its hard security potential and should cooperate with the US instead of competing. The EU should support the US in areas where joint action could lead to better results. With all this in mind, Lithuania should fearlessly support the US as its partner, even when influential stakeholders in Europe advocate for turning their backs on the US or teaching the US a lesson. In the final analysis, should we care more about the security of the EU and the US, our strategic partner, or should we rather care about the investment of several, albeit significant, companies and the willingness to trade with dictators?

A. Ažubalis. The Kremlin is evil, but its friends are ok, aren’t they?