Lithuania is open to common positions with Poland – PM 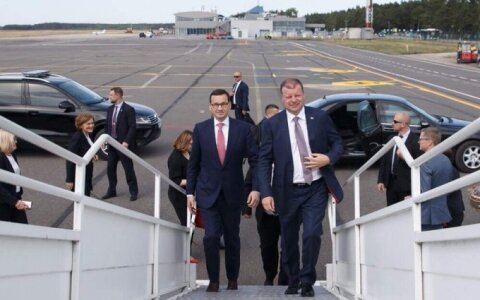 Lithuania is open to the solution of all issues and coordination of positions with Poland, Lithuanian Prime Minister Saulius Skvernelis said on Sunday after meeting with his Polish counterpart Mateusz Morawiecki at Mažeikiai-based oil refinery Orlen Lietuva.

"We are open to the resolution of all issues and coordination of common positions, especially as talks on the EU multiannual budget start and NATO's summit in Brussels approaches," Skvernelis was quoted in a government statement.

He stressed the fact that Lithuania and Poland's bilateral relations were especially good during the terms of Presidents Valdas Adamkus and Lech Kaczynski. The Lithuanian prime minister said, however, he had no doubt that the governments of the two countries would try to have friendly relations.

Related articles
Polish party MP brusquely berates Polish ambassador: no one from Warsaw will stir matters up here
EU cohesion support to Lithuania may be cut by around 20 pct in 2021-2027 - diplomats

"When the two countries stuck together, both countries flourished. When someone managed to drive a wedge between our countries, it was a bad period for both Lithuania and Poland. (…) Today we are in the stage of a new strategic partnership and I have no doubt both my and the Polish government will make every effort for our relations to be exemplary and friendly," Skvernelis told a press conference after the bilateral meeting.

According to the Lithuanian prime minister, Orlen Lietuva's successful activity in Lithuania and in regional markets illustrates strategic relations between the two countries.

Morawiecki stressed that the Mažeikiai refinery is important for energy and political security of both countries.

"Orlen Lietuva really increased our energy security and is also increasing political security. (…) Through cooperation we have hope that it will also be possible to peacefully cooperate with Russia," the Polish prime minister told the press conference.

According to the Lithuanian government, Orlen Lietuva is the largest company in Lithuania with the largest exports level and paying the largest share of taxes. Last year, it paid 302 million euros in various taxes.

Lithuania is open to common positions with Poland – PM