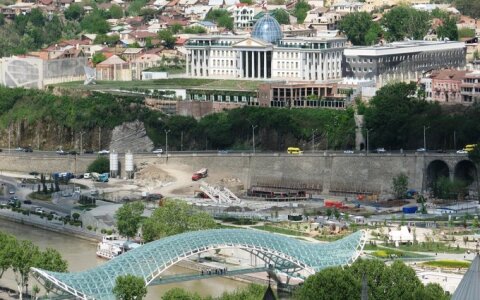 The name of Lithuania sounded loud and clear everywhere on the occasion of Georgia's centenary. Many of the Georgians celebrating the national anniversary in the crowded streets of Tbilisi vowed they would vote for the Lithuanian president in the forthcoming presidential elections. Another relatively frequent statement was that 'Lithuania is the best ambassador of Georgia in Europe.'

Profound mutual respect expressed by Georgians in making the historical decision to call Lithuania by its original name also translates into the responsibility we should take on both for the sake of the future of Georgia as well as our own.

Uncertainty about the future

Although Georgia is seen as a leader among the Eastern Partnership countries and an important ally in NATO, the forthcoming NATO summit is very likely to give the green light to Macedonia and Bosnia-Herzegovina only. The EU's enlargement prospects are also currently only open to the Balkans. In this context, Georgia vitally needs good news. Reiterating the decisions of the NATO Bucharest summit, which were made in concession to the Kremlin's pressure, and moreover, reiterating them to a country that marks the 10th anniversary of the war with Russia this year, would be a historical error beyond forgiving. Moreover, it might also lead to consequences for which, again, of course, nobody would be willing to shoulder the responsibility, just as was the case in 2008.

Related articles
US and Western Europe’s disagreements: whom should Lithuania stand by?
Lithuania condemns Syria's decision to recognize independence of Georgia's regions

There is no point in waiting for the 'right time' for determined decisions as it may never come, unless we summon the courage to make the decisions needed. The failure of the West to make a strategic decision has been used by the Kremlin consistently for ten years now to erode the West itself. Where the EU and NATO fail to protect Western values in border areas, such as Georgia or Ukraine, the Kremlin puts even more efforts and money into poisoning the hearts and minds in Western capitals. As a result, Western minds get contaminated by the Kremlin's propaganda on the need to come to terms with the aggression or even resume dialogue with the Kremlin.

In 1994, the Swedish Prime Minister, Carl Bildt, established a clear link between the Swedish accession to the EU, on the one hand, and free trade agreements and the prospect of accession to the Baltic States, on the other. Why cannot we establish a clear link between the expansion of the EU and NATO to the Balkans, on the one hand, and the future of Georgia, on the other, in all the transatlantic capitals? Georgia is a country that must be included in all the future enlargement schemes, and this is Lithuania's responsibility to achieve it.

The future of Europe

We cannot by any means justify our failure to act by the indifference, political correctness and inability to formulate strategies on Georgia and Ukraine in other Western capitals. The absence of strategy should not give rise to frustration and apathy, but rather encourage the development of the said strategy instead. We must do more, be more creative and more innovative. We need to link the future of Georgia and Ukraine with the debate on the future of Europe initiated by France and Germany. We need to make it clear both to Berlin and Paris that there is only one enemy that stands in the way when we talk of a comprehensive and indivisible European security and a more integrated Europe. And this enemy has long been playing into European divisions so that Europeans break up, fall out, and part company.

In parallel with the success of the Brexit, the instigation of radical anti-European forces within the EU, major capitals, Central Europe, and Lithuania is directly related to the attempts to legitimise Russia's aggression in both Georgia and Ukraine as well as in other occupied territories. Therefore, if we want to build a future in Europe, we need to work together with Ukraine and Georgia, and maybe even with Russia's dissidents who have been trying for more than a decade to create a different Russia. The creation of a European future while hugging Putin as a dear friend will never actually work because, as we know all too well, such hugs are meant for entirely different purposes.

The future of liberal democracy

At the same time, we have to be clear in Washington that the failure to defend democracy in the Caucasus is comparable to a betrayal of American constitutional values and will be further proof that Putin has done everything for the US to leave the international stage, isolate itself even more, and neglect its position as the defender of the universal values of human dignity, freedom and democracy. In this context, the potential US President Trump's meeting with Putin in Washington D.C. may prove to be a serious challenge for us all. We should hope it does not happen at all, and make every effort to prevent it from happening; and thus prevent all our values from being traded off, which Putin, quite foreseeably, is trying to achieve in this situation. Our diplomatic corps should do their best to make it clear to the West that the strategic loss in the battle on Georgia not only amounts to betrayal of the country, but also runs counter to our own core universal values and interests. The situation can be compared to Lithuania's EU and NATO accession. Even before the accession, awareness was raised in the EU and NATO that the Baltic States were a litmus test, in particular, of the success of the Western values in the region.

Georgia is the only country in the Caucasus region that unequivocally associates its future with the European and Euro-Atlantic community. In spite of the existing challenges and problems, Georgia is the most democratic country in the region and the entire region is putting their hopes in Georgia as an example of peaceful democratic transformation to its neighbours. Should this country start sliding down, this would have dire consequences not only for the future of the region, but also for deepening the global crisis of liberal democracy.

Both Washington and London, Berlin and Paris have to realise that the struggle for Georgia is crucial for the preservation of liberal democracy in the world. The Pentagon has clearly identified that the main enemies of democracy were Russia and China, and therefore the current aspirations of Washington to reinforce the belt countries around Russia and China is very important for all of us, not only for Georgians.

This is only the beginning of the global battle against kleptocratic authoritarian regimes and we are all part of it. If we trade off democracy in exchange for financial gain, the origin of which is often hard to prove but usually leads to Moscow and Beijing, we will all lose out. By leaving Georgians, Ukrainians, Moldovans, and many other countries in similar situations to fight alone, we are falling prey to the erosion of democracy just like them, because, in individual geographical areas, we are betraying the values of constitutional democracy both in theory and in practice.

The political elites of Georgia, in turn, need to realise that the deepening integration is only possible when they adhere to the transatlantic community's rules of the game. Divergence from the rule of law, human rights and media freedom, as well as concentration of power in the hands of a single political power (one party democracy) and marginalisation of the opposition will not be tolerated. In order to move forward, the country has to implement the necessary reforms, without making this process selective or simulated. It would be a waste of time, which Georgia cannot afford.

A plan for the future

Last weekend, Georgia celebrated the centenary since the establishment of the very first Republic of Georgia. Even though, at the time, the State of Georgia only survived for three years, extremely much was achieved. It is important that Georgia, officially recognised as 'Sakartvelo' in Lithuania today, does not forget the ideals that guided its development 100 years ago, and fosters them further.

Lithuania was slightly luckier than Georgia. We remained an independent country for 22 years after first establishing the Republic of Lithuania. This has become a reference point for the restoration of Lithuania's independence in 1990. Georgians are well aware of the difference. It is important to not let history repeat itself, and to help Georgia become a success story this time. In other words, we should bring a hope to Georgia that it is taken seriously and that it will in future have the opportunity to become part of the Western civilisation. If we want to help Georgia, we must look beyond our personal needs. We need a pro-active European, or maybe even global pro-democratic soft power, with Georgia and Ukraine as the epicentre and as the key litmus test showing how effective we are. Unfortunately, the current Lithuanian diplomacy fails to satisfy that objective both in terms of the level of ambition and funding allocated for the purpose.

In brief, if we want Georgia to have a future, all the Western world should become aware that the fight for Georgia is important not as a goal in itself, not for the sake of Georgia alone, but also for the sake of European democracies and the future of Europe. With this purpose in mind, we should combine the best global and European planners and defenders of liberal democracy. Together with the most gifted and devoted defenders of freedom and democracy, we could create a new captive nations movement, encompassing not only Georgia and Ukraine, but also Russia itself as one of the largest and most serious victims of kleptocratic regime that aims at destroying liberal democracy worldwide.