Trips to a secret painting island: a conversation with painter Auksė Miliukaitė 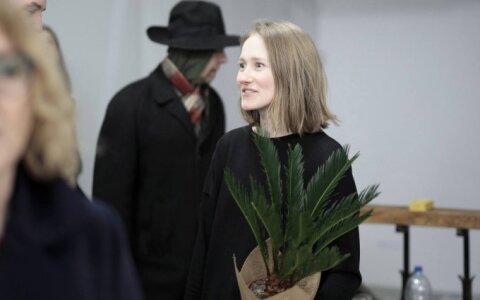 Auksė Miliukaitė is a painter of the young generation whose bright-coloured canvases and their captivating stories have already been noticed by gallery visitors both in Lithuania and beyond. Before the upcoming solo exhibition of her newest paintings “Hush-hush Island”, the artist shares her thoughts about creative work and the soon-to-be-opened exhibition, and reveals the secrets of her private painting island, a press release from The Rooster Gallery states.

You received an MA in painting from the Vilnius Academy of Arts a year ago. What has changed during that time?

At first sight it seems that nothing has changed. I continue to paint, read and live. My creative routine is probably quite similar to the one I had a year ago. But if I compare my inner world and my states of mind then and now, they are really quite different. I'm not sure how much it is related to the opened horizon and the lack of "roof" – the feeling of comfort, not necessarily in the good sense only. Yet it is easier to hear your own voice if you step back from a self-reproducing environment or a powerful system.

Related articles
Director of Rooster Gallery: Interest in art is on the rise in Lithuania
Lithuanian actor Vinokuras to teach Eastern Ukrainian children art of circus

You often take part in group exhibitions, art fairs and plein air sessions, and are active on the Lithuanian and international art scene. Is it easy for a young artist to find her or his place there?

Am I really active? I don't know, it's just that sometimes I feel an urge to do more, to create more. To cooperate more. To find common ground. I don't have the slightest idea where this scene starts and where it ends, or where the territory behind the scenes is. The most important thing is to create and not to be afraid to show your work, it doesn't matter where and to whom.

The beginning of your creative career is related to photography. Now you introduce yourself as a painter. Why painting? How is painting important to you as a means of expression?

Photography and painting have always went side by side. It all started while I attended the Antanas Martinaitis Art School in Kaunas, where I got acquainted with the Kaunas painting school, and the classes in analogue photography at the Kaunas schoolchildren's technical creativity centre. Probably at that time there still was a huge mental gap between photography and painting, but now it's fading. And I like this fading very much. In my painting I apply certain principles of photography: image reproduction, development of image or colour is just like in the darkroom for developing photographs. From digital photography I adopted the aesthetics of image errors, so-called glitches. Elements of different media are combined in my canvases; sometimes they cut across their borders and "climb over" to the gallery walls. Today, painting to me is colour, non-random coincidence, one of the realities.

How are the narratives of your paintings born?

From the surrounding environment: culture, nature, books, films, music, streets, smells, colours and relations. From what affects me, resonates with me or, on the contrary, what irritates me and what I want to escape.

From the very beginning of your creative career, you use appropriation as the main creative method: appropriating the already existing artwork or its detail and using it to create a new work. In your paintings we can recognize quotes from various artworks from baroque art to the classics of modernism and contemporary art. How does this method play out in your work?

Appropriation helps me explore urgent themes, such as artistic authorities, creative influences and systems of image postproduction. In my paintings, I raise the question if a creator can avoid the influence of the surrounding visual environment and at the same time not to isolate herself from the processes of cultural life. I'm also interested in the relations between a creator, an artwork and a viewer. I keep asking myself if it's me looking at the work, or if it's the work observing me. I consciously intensify this illusion of mutual observation. I see a canvas as a screen or a mirror, in which the looks of reality and the one who observes it collide. The work and the look at the work become a link between the creator and a viewer. I wonder if the viewers sometimes feel being watched by the works. Besides, I find it very interesting to observe how the meanings of the works change. By borrowing the details of an original work, I change their primary narrative. The viewers observing the work create another work in their mind, and later, also in their memory. Their life experiences are different, thus they give additional meanings to the painting, which were not intended by the artist. In this way the work turns into a partly or even totally new work in the perceiver's mind. Later memory adds more new meanings to the work, as it suppresses the impressions or manipulates them. I guess a similar thing may happen to a creator meeting her or his older work – it will never be the same as it was at the time of painting.

How do you choose the works whose motifs appear in your paintings? Or perhaps they choose you?

It depends. I believe that we are all subject to influences, collective subconsciousness or some other energies – everything is related. Thus sometimes a motif first comes up as theoretical, and then I search for a visual solution: I make set-ups, assemble collages. And sometimes everything develops very intuitively, inexplicably, and motifs come to me by themselves.

Besides art, your paintings contain a lot of references to music, films and literature.

They are very close. All these references become a kind of cultural language. I arrange cultural layers, as through them I can say more than through a single lexical unit. Most probably I do it because I like playing those games with works by other artists. While looking, observing, listening, reading or experiencing a work in any other way, I like to think about the environment and the context in which it was created. I am fond of tracing back the influences. Like in Marcel Proust's book In Search of Lost Time, when Swann sees Odette as Zipporah from the Italian Renaissance artist Botticelli's fresco The Trials of Moses. This scene reflects the principle of my creative work.

Your works abound in cultural information. Is it important that the viewer recognizes all the details and reads your painting the way you painted it?

It's great if there are curious people, thinkers and travellers who are not afraid to venture out into the cultural or visual labyrinths of meaning. But as I play with meanings and remake cultural elements, I think and I hope that the viewer can see my painting just the way it is at the moment when it's being looked at, see it as a work acting on its own. Perhaps I'd be happy too if one day I could switch off this cultural noise and just be able to see an object as it is.

How should a culturally less experienced viewer interpret your works?

Read, see or observe the elements that one finds interesting at that time. When I work, I like to show my paintings to my friends or relatives, which come from other professional fields and are just starting their acquaintance with art. I like to hear what they see at that time. Their thoughts feed my own ideas and prompt where else I can direct my focus while creating. Sometimes you can get the most unexpected feedback or an apt commentary from a person who's just getting the first taste of the art world but has a keen intelligent look.

Recently you have used the metaphors of an island or oasis when speaking about your painting. Can you explain in more detail how this idea emerged and what it means?

The island metaphor has emerged when trying to describe where I find myself when I paint. If I don't find myself on an island while painting, painting doesn't happen. Sometimes I ask myself if I could get to that island when not painting. And I'd like to leave the idea of an island open to interpretations: be it the ocean of the planet Solaris, a vision of Thomas More's Utopia, St. Andrew's Island – a colony of the Grand Duchy of Lithuania in Africa, – or the Easter Island, the most remote island of the world. This island, existing virtually or in the form of thoughts, visions or ideas, is a kind of viscous swamp, in which imagination can freely develop and manipulation of images can thrive.

Is this idea of an island going to "become flesh" in the exhibition "Hush-hush Island"?

This exhibition is one of the ways to show what my painting island looks like and to invite the exhibition visitors to take a tour, to get lost and discover a totally new world, to look at the artefacts that I've brought from the trips to the island, and to meet the local inhabitants. I really like that the exhibition venue, the Pakrantė creative industries centre / The Rooster Gallery, and its peripheral location in the city supplement the idea of the exhibition. To get to the exhibition, one will need to take a trip both physically and with one's emotions and thoughts, just like to an island.

The exhibition "Hush-hush Island" will be open on June 1–15 at the Pakrantė creative industries centre (79 Vaidilutės St., Vilnius)

Trips to a secret painting island: a conversation with painter Auksė Miliukaitė