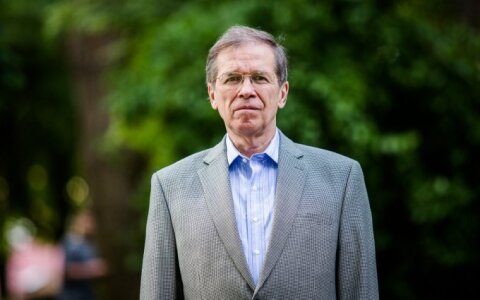 Three years after a massive flood of refugees, migration is once more beginning to dominate European Union politics.

The current reason is the new right wing Italian government's decision to prohibit a French NGO's ship with 629 migrants from docking in the country's port.

With Malta also refusing to accept the ship, Spain has announced that the migrants may disembark at the port of Valencia. With French President E. Macron accusing the Italian government of "cynicism and irresponsibility," Rome retorted that France has accepted only 640 of the over 9,000 migrants it had pledged to accept from Italy.

Related articles
Kęstutis Girnius. Citizenship and other referenda
Exploitation at work: Lithuanians are fleeing, but their places are being taken by immigrants

Tensions settled with Macron stating he did not intend to insult Italy.

Rome declared that it would continue to refuse ships carrying migrants.

Tensions have briefly settled, but the problem has not disappeared. German Chancellor Angela Merkel has stated that efforts to resolve intensifying disputes over migration are an important test for the future of the European Union, "a sort of litmus test for Europe's future and harmony."

If this is correct, the prospects for the future of the EU are poor because its ruling coalition is unable to come to terms in regard to this question.

The challenges posed by migration have been accumulating for decades, but political correctness has ensured that migration was spoken of only positively, its opponents were often called nationalists and racists.

Outcry over migration policy created conditions for populist parties to thrive. While they did not escape certain failures, their influence rose even in fairly liberal states such as Denmark, the Netherlands, Sweden and Germany.

Anti-immigration moods are especially strong in many Central and Eastern European states, also Austria and Italy, where only a little over a million foreigners lived in 2002, compared to more than four million in 2011.

Fear of migration is deeply and widely spread. In 2016, 71% of Danes, 67% of Hungarians and 57% viewed migration as the most important political problem.

In only one of the 27 EU member states voters do not view migration as one of the two main concerns. 2016 was the year after the great migration, thus surveyed voters may have reacted especially sensitively to migration, but critical moods remained.

Last Wednesday, Austrian Chancellor S. Kurz announced that the Austrian, German and Italian ministers of the interior have formed "an axis of the willing" to combat illegal immigration. Such an "axis", to which Germany Minister of the Interior H. Seehof also belongs, was unimaginable several years ago.

Migrants are often disliked due to various reasons, racist and nationalist ones included, especially right now when migrants are of another race and/or religion, namely black, brown or Muslim. An exception is made for Eastern Europeans, but Brexit has shown that the white skin colour of Poles, Lithuanians and Romanians does not ensure a warm and friendly reception.

They too are viewed as undesired foreigners. But it is not only deplorable motives that encourage hostility and apathy.

Some wish to live among their own, however these "own" may be defined, without feeling any major antipathy to others. Hostility is also encouraged by the feeling that the opinions of them and other citizens are disregarded, that they are helpless observers of political processes.

This feeling of helplessness is not to be disregarded. There are various definitions of democracy. But a political system is not democratic if it is lacking institutional measures, which would ensure that the citizen's will expressed during elections and referenda would be implemented and enacted.

As Yascha Mounk notes in his book The People vs. Democracy, liberal democracy is currently undergoing a crisis.

Increasingly often we either have non-liberal democracy akin to that in Hungary or liberalism without democracy, when the principles of liberalism are enacted, disregarding the will of the people, often against it.

The powers of parliaments, in part also of the president, are increasingly limited, thus also the ability of common citizens to influence political processes. Various technocrat and expert institutions and commissions make decisions, which once were made by parliaments, in part because the spheres they regulate are so complex that only experts suitably understand them.

The European Commission proposes, passes and implements a variety of legislation and rules. Just you try to influence the commission! The role of central banks and their independence from the government is rising.

This liberation from the will of politicians is held to be an important victory, but it also means that unelected and unaccountable to voters officials make decisions, which affect the development of the economy.

Constitutional courts can make parliament and executive government rulings null, especially when their rulings are not appealed. The Dutch Constitution clearly establishes that no court can declare a law unconstitutional.

But the country is committed to respecting international agreements on human rights, thus courts, that said not Dutch ones, can change or remove certain legislation.

Mounck also notes that international agreements and organisations are playing an ever-increasing role in, for example, regulating trade or combatting global warming.

We can add that the feeling of helplessness is also increased by the elite's distance to the common citizens' worries, the so-called "cream of the crop's" conviction that they are more informed, more familiar with the situation, more morally advanced, thus having the right to make decisions and implement policy they believe is correct, even if the citizenry thinks otherwise. Democracy becomes declarative.

Some concerns are baseless. There is concern regarding migrants and refuges even in countries where there are almost none. What percentage of Lithuanian or Latvian residents know or have met even a single migrant?

Even if there were, say tens of thousands, they would also be hardly noticeable, except if they were all housed in a few towns. But the pendulum is swinging to the other side, traditional parties are now also speaking up against migration. To rein it in, strict measures will likely be taken, ones that can obtain support also because earlier the people's concerns were disregarded.

The fairly liberal Switzerland voted in a referendum in 2009 to prohibit the construction of minarets. It is not difficult to imagine, that the citizens of some countries would agree to a carefully redacted referendum, which would strictly limit the number of migrants seeking a better life, but at the same time stressing that the Refugee Convention will be adhered to and all minority rights will be respected.

It would be difficult to justify the annulment of the results of such a referendum.

A crisis is brewing. Despite the protests of Chancellor Merkel, Seehofer, who is the chairman of the daughter CSU party, intends to send police officers to the border so that they would send back migrants, who are already registered in other European countries as refugees.

Pragmatic calculations are influencing the CSU, which is concerned that it will fail to gather a majority in the autumn Bavarian parliamentary elections, if it fails to satisfy people's expectations. Merkel may succeed in forcing Seehofer and the CSU to stand down and withdraw the decision.

But opposition to migration will obtain a different form.