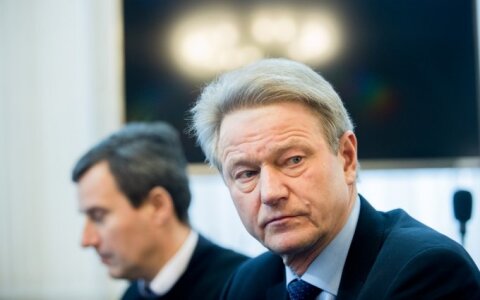 Lithuania is facing sanctions if amendments paving the way for Rolandas Paksas to stand as a candidate in elections do not more forward in the Seimas, says Donatas Murauskas, head of the Lithuanian Justice Ministry's Division of Representation at the European Court of Human Rights.

"The Council of Europe's Committee of Ministers is waiting for tangible results by Oct. 26. Oct. 26 is a very important date as there's a significant risk that in December the Committee of Ministers might consider adopting an interim resolution against Lithuania for the first time, which means international sanctions," Murauskas told the Seimas Committee on Legal Affairs on Wednesday.

In his words, an interim resolution would be „a very clear conclusion that the state is not meeting its international commitments and also a certain signal to both member states and international organizations".

The Committee on Legal Affairs on Wednesday chose the version registered by the ruling parties, allowing Paksas, impeached and removed from the presidential office in 2004, to run for parliament and president. The amendment would allow running for any office following ten years after removal.

Paksas cannot run for president or parliament since 2004 when he was impeached and removed from the presidential post. In 2011, the European Court of Human Rights ruled that the lifelong ban from any election was disproportionate.

As Lithuania has so far failed to adopt necessary constitutional amendment to allow Paksas to stand as a candidate in elections, the Council of Europe's Committee of Ministers, overseeing the implementation of the Strasbourg court's ruling, launched the so-called enhanced supervision procedure against Lithuania.

Paksas was impeached and removed after the Constitutional Court ruled that he had grossly breached his oath and violated the Constitution by granting Lithuanian citizenship by means of exception to his financial supporter Yuri Borisov.