Arvydas Juozaitis. Time to unite the futures of Lithuania and Latvia 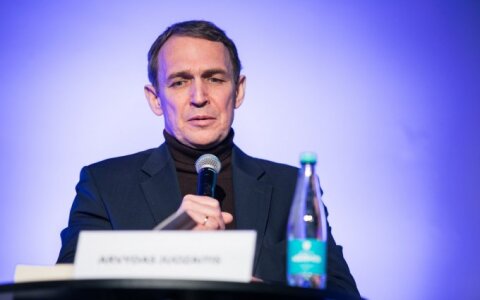 There rarely are better neighbours than Latvians and Lithuanians. However, the attitude of the average Lithuanian toward Latvia is as if there are no Latvians at all.

Let us think and remember: at the start of the 20th century, half of the Lithuanian signatories' fates were closely linked to Latvia-Jelgava (Mitava), Liepoja (Libava) and Riga. And later, when securing independence, who were our best brothers? Of course the Latvians. Even the Latvian political elite, with difficulty, but "resolved the question of Palanga" in favour of us – we received almost half of our current seaside.

I came to love the Latvians already in my childhood. I believe that many Lithuanians have experienced this feeling. As soon as their language reached the ears, immediately another uplifting voice speaking in our language rose up. Oh, I remember (the feeling remains!) – we are one, just a little different! How interesting! The widening, reminiscent of a rocky riverbed, language, the language which drips honey on the ears and soul. And at the same time – surprise. Why are we not taught to speak in the sister language of ours at school?

Related articles
Baltic power grids to be synchronized with Europe via LitPol Link, reserve link
Putin is within easy reach of the Achilles' heel of NATO

Currently it could be learnt in the "pašmacības" way, as the Latvians say, online, by listening to LR-1 [Latvijas radio viens] for half a year, fifteen minutes every day. Put on earphones on the bus and you're in Latvia. Or to watch their Panarāma every other evening instead of watching our own – it will only help.

Now we have a weird and if you look healthily – unbearable – situation: when we meet we speak in Russian or, even more odd, in the horrible, barely living English language. We are unable to even express our thoughts properly. But we could communicate even without a translator. Yes, everyone, we push one another away with our elbows. With our backs turned away. The Latvians still look over their shoulders, but we make no effort to turn back.

Of course, Poland has done everything to prevent Latvia and Lithuania from drawing closer to one another in the first half of the 20th century. The results remain in the centre of Riga to this day, when departing to Vilnius you see Kauņa, that is to say Kaunas direction. The Lithuanian capital in the street signs of the Latvian capital has endured both the first independence and Moscow's communist regime, reaching the 21st century. This is how our "closeness" is displayed, it is an impermissible blindness. For almost a hundred years now.

From 2020, all Latvian state middle and high schools are moving to teaching in the state language – Latvian. Has anyone spoken on this in Lithuania? Has LRT analysed, what is going on right next to us, in our relative tribe? Did the Seimas support the Latvians? Inside. Did the Seimas make any slight statement in support of the Latvian Saeimas? If it did, it wasn't heard. But the Latvians are saving themselves from a terrible assault from Moscow, it backing the Russian community. No, we are uninterested. We ourselves have chosen to drown in "the three Polish letters." It would be humorous if it weren't so sorrowful. AAfer all, three letters will not calm the self respect, perhaps only incite it because they will only show how the Polish language is being distorted and passions will flare anew. After all the language that was thrust into the lips of the Vilnius region's people and had them turned to face Warsaw will be insulted again. An enchanted cycle. The Constitution must be pheld: the state language is Lithuanian. Did our Lithuanian book smugglers wade through mud and Siberia for us to mock our language, barely saved from death? After all, in Lithuania language is the state border. Same as in Latvia.

If only a step was taken (at the state level) to bring our informational spheres closer. We remain only at raising of flags and singing of hymns. That's it. Not a culture atachee in our embassy in Riga, nor an LRT information policy (not even to dream of an office in Riga!). This has been going on for thirty years. In other terms, it is no accident and not just a matter for the LRT director general. These are the fruits of systematic ignoring of the Latvians. If not for Arūnas Vaikutis, who sat down in a tiny room in the Latvian radio (LR-1), we wouldn't even hear a voice from Riga.

I had hopes that with the Farmer-Greens winning the Seimas elections, there will be at least miniscule changes, but it didn't happen. And we remain alone on the frontline of West and East. And the Latvians? True, they have at least established an office for their national broadcaster (LTV-1) in Vilnius for a time now. New from Lithuania are an almost daily matter in Latvian news media. They know better, what is going on here. But we do not even care about the strategic port of Riga. How much we could have achieved by cooperating with the Latvians.

I am not idealising the Latvians, I see traits in them, which are less than appealing. But they are very similar to our own, while we view ourselves almost as the epitome of Europe.

The conclusion must nonetheless be one: we cannot live any longer without knowing one another's languages, we cannot live without daily communication between the parliaments of Latvia and Lithuania. We cannot continue to live without seeing and hearing Latvia at least in TV and radio broadcasts.

Arvydas Juozaitis. Time to unite the futures of Lithuania and Latvia