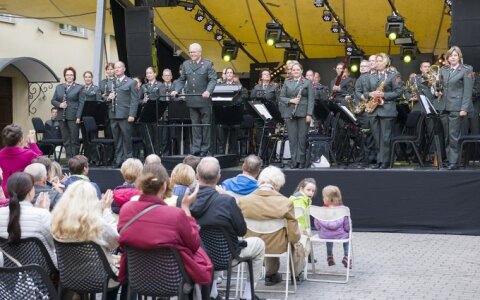 Right upon the heels of the visit by the Dutch King to Lithuania last month, a much larger contingent is making a musical call on Vilnius. The 52 members of the Netherlands Royal Military Orchestra 'Johan Willem Friso' are playing a number of concerts in the Capital. They are also a reminder that there is also a large Dutch presence in Rukla as part of the NATO presence in Lithuania.

But on Wednesday evening it was an all music evening. The orchestra played a concert in the courtyard of Vilnius' Teacher's House. The band opened with a pleasant sounding 'Poet and Peasant' overture by Franz von Suppé. From the mountains of Austria, the band played 'The Heart of Lithuania' by Dutch composer Jacob De Haan. The piece is based on 5 folk melodies from Lithuania moving musically through a series of emotions and typical Lithuanian melodies.

The clarinet section got a heavy-duty workout playing Paganini before the orchestra concluded the first part with Armenian Dances by the American composer Alfred Reed.

After intermission the band slipped into a festive mood. There was an Iberian Fandango and a most sensitive played 'Londonderry', featuring the trombone sliding into this touching melody. However, the accent of the second part of this festive concert was on music from the USA, a country celebrating its 242 birthday. A John Williams march from 'Midway', and a lovely saxophone solo in 'My Favourite Things' before ending with a real barnstorming musical atmosphere.

On Friday, the band will play in their festive Grenadier uniforms, conjuring up an atmosphere from the late 18th Century as they march from Vincas Kudirka Square to the Presidential Palace. Something not to be missed.