Vygaudas Ušackas, KTU Institute of Europe director and former Minister of Foreign Affairs of the Republic of Lithuania 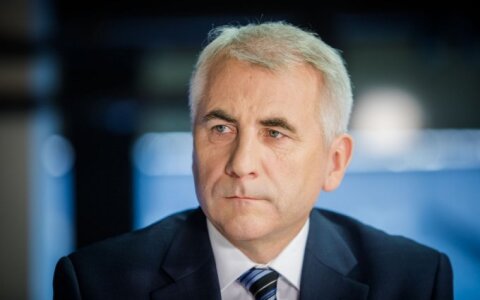 Raimundas Lopata's public refusal to participate in the 20th anniversary discussion of the Nida Initiative appearing in Delfi on Thursday both surprised and disappointed.

It is worth reminding that Raimundas was one of the closest companions, VU TSPMI director in 1998-2001, who helped prepare and implement the Nida Initiative, which encouraged us to open the way to the EU and NATO. And several months ago in front of other people, he agreed to the then only idea of this discussion, only warning he would attack it, especially if I ran for president.

And he started. Having confirmed his participation a week ago, the former Nida Initiative discussion chairman stepped out with the classical "fake news" example. So now, a question arises, Raimundas, if being an academic and releasing a public political text, why were the reasons for it not explained. Perhaps this should be the time and place to repeat that you no longer conceal you work for one of the declared candidates. There aren't that many of them, but I will leave it to you to uncover their name.

The Nida Initiative 20 years ago was not about Ukraine. And Raimundas knows this better than anyone else. However, when speaking about West and Russian relations in early October we will also speak of and for Ukraine.

For that which I defended for four years in the name of 28 EU members states in none other than Russia – for human rights and freedoms, for Ukrainian sovereignty and independence, as well as association with the EU, Against Putin's aggression. I daresay I did so louder and more convincingly than any other Western diplomat in Moscow. In my public statements on TV, radio, social media, Kremlin officers, yes even basketball courts. Sparing no time and effort. With principle and good arguments. Respectfully, so as to not insult all the people of Russia.

Any Western diplomat or journalist, who worked in Russia at the time, can confirm this. But defending values does not end with diplomatic service. Just over the past two months, I have been to Washington, Berlin, London, Paris and Copenhagen, where highly ranked officials have inquired for my insight and advice. My answer was as follows: it is important to maintain sanctions against Russia while the Minsk Agreements are not implemented.

We must ensure NATO and especially US troop presence in the Baltic region. It is important to ensure greater financial support and provide EU membership prospects for Ukraine. Finally, it is time to invest in a Russia after Putin, supporting civic society, human right campaigners, supporting exchanges with youth and enacting regional cooperation. I have and will continue to defend Ukraine's European choice. This is because Ukraine's freedom is also our freedom.

Why was the Nida Initiative born in 1998?

This is because it was a strategic goal of Lithuanian diplomacy, untying the Gordian knot en route to NATO and the EU.

In 1996, a study by the US air force RAND Corporation think tank appeared where Kaliningrad Oblast's geopolitical situation and the military and political threats that arise from it were identified as the key challenge to Lithuanian entry to NATO. US strategists were blunt: it is impossible to defend Lithuania militarily. NATO membership is impossible.

In 1998, with the agreement of the then Prime Minister G. Vagnorius and Minister of Foreign Affairs A. Saudargas, Lithuanian diplomats created an unprecedented campaign, later dubbed "the first strategic initiative in Eastern Europe" in the West.

Kaliningrad was suffering from a financial crisis at the time, its then governor declared an emergency. Reacting to this situation, the Lithuanian government dedicated 2 million litas and invited all the Baltic Sea countries and European Commission to provide humanitarian aid to schools, hospitals, orphans and children of the region.

We aided the Lithuanian community, which operated there, Lithuanian businesses. With subtle mediation from top German diplomats, we gradually obtained Russian consent. We then made the final step – proposed 15 projects to the European Commission on cooperation between Lithuania and Kaliningrad Oblast. This way we arranged a number of round table discussions named the Nida Initiative, which were also chaired by Raimundas Lopata himself.

We were followed by Sweden, Poland, Denmark and Germany, who began regional cooperation projects with Kaliningrad Oblast. The goal was for this region to turn from a threatening military outpost against all of Europe into a Russian-administered territory, which maintains cooperative and possible economic relations.

Only after a year and a half, in March 2000, in an interview the head of the Russian Baltic navy, Admiral V. Yegorov declared, "Lithuanian entry into NATO will not pose a threat to Kaliningrad Oblast." During surveys, the residents of the region specified Lithuania as their best neighbour. Sceptics in Berlin, London and Washington were sent a strong message that Lithuanians are not only strong in their values and prepared to defend their Homeland, but also wise diplomats, capable of managing potential risks and reducing friction with neighbours in pursuit of EU and NATO membership.

Fascinated with this diplomatic victory, in the year 200, European Commissioner for Foreign Policy Chris Patten invited me for detailed consultations twice, inquiring if Kaliningrad could be turned into the Baltic region Hong Kong by the EU. From today's point of view, this looks laughable. But such was the reality and Lithuanian contribution in reducing political tensions, encouraging regional connections and preparing allies for Lithuania's accession to NATO and the EU. By the way, the European Commission dedicates 17 million euro to Lithuanian cooperation with Kaliningrad to this day.

Thus, the October 2nd discussion will not turn into a "feast during the plague" and "a game in favour of Kremlin interests" as Lopata claims. The plan is to have a professional and open discussion between Western strategists and experts, with the participation of Russian representatives, recalling the lessons of the Nida Initiative.

The illegal annexation of Crimea and war in Eastern Ukraine severed the final strand of trust in Russian political leaders and thrust East-West relations several decades back. Thus, considering this, we must objectively evaluate the situation, how to avoid further escalation of the security situation or even conflict in the Baltic region. We will discuss why NATO must strengthen its support for the Baltic States and Poland. Another topic – up to now the European Commission has been financing regional cooperation projects. It is important to also talk here, what is already discussed in Washington – the strategic prospects of the Baltic Sea states, EU and NATO relations, if after Putin's rule the country would turn toward democracy and cooperation with Europe.

And of course we will remind that Russia's road to Europe crosses Ukraine – respect for Ukrainian sovereignty, independence and Ukraine's free choice to become a fully-fledged member of the Euro-Atlantic community.

Such major figures of international politics as former Danish Foreign Minister Ufe Ellemann-Jensen, co-author to the famous RAND study Robert Nurick, former NATO representative to Russia and a recurring figure in its blacklists Jogn Lough, former Danish Ambassador to Lithuania and Russia Per Carlsen, former Finnish ambassador to Russia and Germany Rene Nyberg, former German policy deputy director, ambassador to the Vatican Hans-Henning Horstmann and others have already expressed their intent to participate.

Among them, we also find a sympathiser of Lithuania's European path, who oversaw the timely and ordered withdrawal of Russian troops from Lithuania, former Russian Baltic navy chief Vladimir Yegorov. Also Solomon Ginzburg, the last deputy of the independent Kaliningrad Oblast Duma, who still fights for democratic values.

Without exaggerating, the discussion about Kaliningrad Oblast has drawn vast interest in the Western expert community. Registration was closed with 3 months left to the event. However, after Raimundas Lopata's politically and with clear intention and not academically argued refusal, it would appear we will be able to confirm other Westerners' requests.