Presidential candidate’s initiative described as a national threat: such people should not even be invited to Lithuania 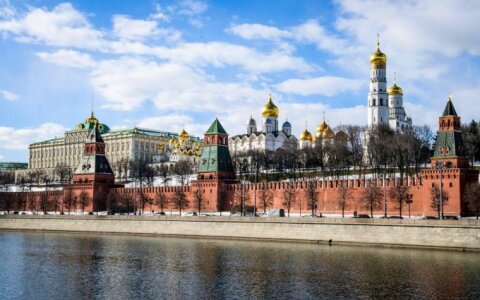 Is it necessary or to what extent is it necessary to interact with Russia – this discussion started early this year appears to have been renewed. New passions were incited regarding the October 4-5 international conference to be hosted in Kaunas, 20 years after the Nida Initiatives, to which Russian representatives were also invited. However, Eastern policy experts have been critical of this, stating that such conferences benefit Russia and that the invited Russian experts raise doubts.

Meanwhile, the conference organiser, former EU ambassador to Russia, Vygaudas Ušackas, describes the criticism as simply politicking and believes that it is crucial to interact with Russia.

Political scientist Raimundas Lopata publically expressed his criticism of the conference. He is convinced that at the moment such conferences should not happen at all, considering the current geopolitical context. "The essence is, what can we talk about to the Russian while the question of Ukraine is unresolved, while there is occupation of Ukraine? I believe that now is not the time," he told Delfi.

"There are preparations to discuss with Russia while partially or completely ignoring our region's main geopolitical problem – the occupation of Ukraine. Without Ukrainian participation and overall not viewing the fact of the occupation as a serious problem. There are preparations to discuss questions as if not being in the EU, about EU-Russian problems, as if the EU has problems and who knows what conflict is ongoing in Ukraine," professor R. Lopata wrote in his text, published on Delfi.

The professor believes that the conference's narrative was imposed by the Russians. "Russians are interested in participating anywhere. Just their (Russians') presence is a bad sign," the political scientist said.

He admitted that he initially agreed to join the conference, but later changed his mind. "I told him (V. Ušackas) that complications could occur and where the greatest danger lies. And another matter is that after seeing the invitation text I realised that these insights of mine are not working. It is impossible to talk without the Ukraine question being resolved," the political scientist said.

M. Laurinavičius: such conferences are a threat to Lithuania

R. Lopata is also backed by Vilnius Policy Analysis Institute chief specialist Marius Laurinavičius, who points out the conference format and choice of participants. According to him, conferences of such a format are a classical example of how Russia spreads its influence net.

According to M. Laurinavičius, similar discussions are one of the means of Russia spreading its influence and they are well known. "There is this Yakunin (Vladimir Yakunin), former Russian railway chief and influential representative of the regime, Civilizations Forum. In essence, the format and goals are declared the same as Mr. Ušackas'. Any expert, who understands Russia at all, will find it evident, that this "dialogue of civilizations" is intended to spread Russian influence," M. Laurinavičius says.

The expert is convinced that while war is ongoing in Ukraine, out of principle, such discussions cannot be and only one matter can be discussed with aggressors – the cessation of aggression.

"As Lithuania, unfortunately in terms of power we are not those, who can talk to the Kremlin about withdrawing aggression because these are matters of power. We can talk as part of the EU, that is to say together with Brussels or as part of NATO, but we cannot talk to Russia about the cessation of aggression on our own. We are too small for it, thus no sort of dialogue is possible at the moment," he told Delfi.

He emphasised that another reason it is simply impossible to talk about the cessation of Russian aggression in the conference is that none of the invitees are representatives of the Russian regime. According to M. Laurinavičius, the only condition that would permit talks with Russia is the cessation of aggression.

"Ukraine is a key, but only small part of Russian aggression. There is a variant where due to some sort of strategic or tactical interests, Russia could implement the Minsk Agreements. And it would want to implement them based on how it reads them, not Ukraine and the rest of the world. Hence such a scenario is, in essence, possible, but this does not mean that Russian aggression will end," the expert emphasised, speaking of what could become a breaking point in dialogue with Russia.

V. Ušackas: it is cheap politicking

The conference's organiser V. Ušackas dismisses the criticism and describes it as politicking. He states that the discussion he is organised is expert – academic and not political, while also having the full support of the academic community.

"The discussion is intended not for politicking, but to speak of strategic matters, about what happened 20 years ago, why it happened, what Russia's responsibility is, what the Baltic States have to do as a response to aggressive Russian policy, about how relations could change in eight or ten years, if Russia turns to the path of cooperation with Europe following Putin's rule. It is strategic analysis, which differentiates it from short term politicking," he told Delfi.

V. Ušackas disagrees that currently there is nothing to talk about with Russia. "We are not talking to Russian politicians, we are not inviting President Putin or his top officials, this is an expert discussion that we are in, about what to do. We will talk openly, candidly, professionally and respectfully to the Russian experts about the importance of Russia withdrawing its forces from Ukraine, returning Crimea to Ukraine and upholding the Minsk Agreements. All this will be discussed with members of the expert community," he stated.

V. Ušackas sees benefits to Lithuania in such discussions. According to him, this way Lithuania shows that it is unafraid to talk to experts about Russia.

"It benefits Lithuania because we present the signal that we are unafraid to discuss with experts, that we have an understanding of what is happening in East-West relations and that we are creating a platform where those arriving from both the West – Europe and America and from Russia can talk in expert, political science terms, not through cheap politicking," V. Ušackas is convinced.

Also wishes to interact with those, who talk to Putin

Nevertheless, M. Laurinavičius remains doubtful due to certain participants of the conference. He points to two names – Dmitri Trenin and Vladimir Yegorov. D. Trenin is a former GRU officer, currently heading the Carnegie Centre in Moscow.

"Anyone, who has an interest in Russia knows well that people, who are GRU, FSB or KGB former officers, they never cease being that. And this is not because Putin said that there is no former. These people, even when they perform their civilian or any other career, they remain at least in the reserve of that organisation," M. Laurinavičius said.

V. Ušackas told Delfi that D. Trenin will not be participating in the conference as he has other plans. However, he believes that D. Trenin is one of the most interesting analysts, who has access to Russian President Vladimir Putin.

"D. Trenin is one of the brightest and, in my opinion, one of the most interesting analysts, who of course has access to the Kremlin and we wish to talk to the people who understand and talk to Putin, those who would pass on the news, unpleasant, but expert news, political messages, which it is important that the Russian government knows. It is important to pass on that the West and Lithuania are unafraid to talk with Russians, are unafraid of conveying to them the unpleasant truth, talking about better relations and what is needed if Russia wishes better relations," the former EU ambassador to Russia stated.

When asked, why a former GRU officer could be invited to Lithuania, V. Ušackas stated that such are the realities of Russia.

"If you wish to understand what the Russian government is, you must talk to them. I am not saying you must make friends, nor am I saying that you should form coalitions," V. Ušackas stated.

However, he emphasised that cooperation must be alongside the strengthening of Lithuanian defensive capacities, alongside NATO force increases in the Baltic States, particularly that of the American presence, sending a clear message to the Kremlin that Lithuania will defend itself, that it has allies, but are not paranoid or have any phobias, that it is possible to talk, interact and discuss on questions where there are common interests.

For us there is no more important and more dangerous neighbour in terms of security than Karaliaučius region (Kaliningrad Oblast). We are discussing and interacting on questions that suit our national interests – Karaliaučius region is very important. So that it would not be a threat to Lithuania, so that we would understand their thinking, so that we would understand possible intentions and would avoid accidents. And there is no need to scaremonger that a meeting, where senior analysts and officials participate will be a danger to Lithuania," V. Ušackas stated.

In his Facebook profile, M. Laurinavičius raised questions of V. Yegorov's invitation to the conference, presenting several facts on the latter's political activities.

"V. Yegorov is not just some dissident or opposition figre. He remains an integral part of the Kremlin mafia system (...). He is closely linked to another former governor of Kaliningrad, Nikolay Tsukanov. The same, who gained infamy through his "report" to V. Putin that "there is nothing left to see in Lithuania other than the elderly and children," while the population has decreased to 1.4 million (At the time, V. Yegorov was N. Tsukanov's advisor) (...)," M. Laurinavičius wrote.

V. Ušackas has told Delfi that he does not know such facts about V. Yegorov and that all this criticism seems like a political commission to him, an effort to undercut the conference's reputation. In his response to R. Lopata also published on Delfi, he describes V. Yegorov as "a sympathiser of Lithuania's European path."

When asked whether such discussions should at all be held in Lithuania right now, M. Laurinavičius stated he does not believe so.

"We should talk to the West about Russia, both about its future and about how to defend from it. There is need to talk about it, but inviting representatives of a regime, which is currently warring against us, I do not see any possibilities and see no benefit to Lithuania," M. Laurinavičius said.

Delfi reminds that the Nida Initiatives appeared 20 years ago as an initiative intended for Kaliningrad Oblast. The geopolitical situation of the exclave and the political and military threats arising there were a major challenge to Lithuania's entry to the EU and NATO. The Nida Initiatives 20th anniversary conference is to be held in Kaunas on October 4-5.

Presidential candidate’s initiative described as a national threat: such people should not even be invited to Lithuania