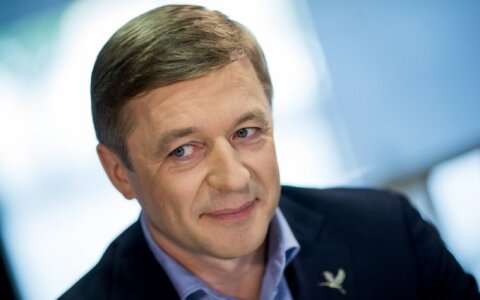 The Lithuanian Farmer and Greens Union (LVŽS) Seimas group prefect Ramūnas Karbauskis together with a group of supporters intends to investigate illegal impact and influence on political processes for the time period when his opponents, the Conservatives and Social Democrats were in power. Few understand, what specifically is to be investigated, however it could open the way to various political manipulations, lzinios.lt writes.

The commission's initiators explain that the Seimas National Security and Defence Committee (NSGK) parliamentary investigation on individuals, business subjects and other interest groups' potential illegal influence on political processes conclusion revealed widespread corruption and business subjects and other interest groups' pursuits of controlling the state. It is claimed that certain annexes to the NSGK conclusions presented to Seimas noted factual circumstances that require detailed analysis.

Apparently in order to uncover, why action was not taken in time to reduce the illegal influence of business groups and dealings with politicians and state institutions and to discover the factual circumstances linked to politicians' decisions when in significant economic sectors these could have been influenced illegally and may not have matched state interests, it is necessary to form an ad hoc investigative commission in the Seimas.

At the same time it is claimed that during the preparation of the Seimas NSGK conclusions and with parliament publically debating them, significant information surfaced in public on potential illegal influence in appointing law enforcement officers, influencing political processes in Seimas and perhaps even seeking to form a political majority favourable to business groups in 2008-2012.

The aim is for the commission to be formed out of 12 MPs, who can work with classified information, adhering to the Seimas group proportional representation principle. The commission would have to investigate certain episodes from 2008-2016 by May 1, 2019.

The commission is to be tasked with investigating the potentially illegal influence of interested parties on the country's political processes, among other things – on the proceedings of elections, parliamentary coalition formation, the work and financing of Seimas groups, individual politicians, parties, as well as civic movements. Political appointments of state owned company and institution officials would also be reviewed.

An answer should be provided, based on what information conclusions were made, what legislation was initiated and what other steps were taken.

R. Karbauskis, who is initiating the new parliamentary investigation, describes it as a continuation of the Seimas NSGK investigation. That said, this time he states more attention would be on politicians, not businessmen. "There is certainly nothing to fear for those, who are in no way linked to corruption," the "Farmer" leader explained.

When talking about the investigation questions, R. Karbauskis has earlier mentioned the car sales, real estate development and energy company group Modus. He has accused former Prime Minister Andrius Kubilius of supporting it. The latter dismisses all the LVŽS leaders' complaints.

The "Farmers" have said earlier that they wish to investigate President Dalia Grybauskaitė's correspondence with the then Liberal Movement chairman Eligijus Masiulis, who is the primary suspect in the largest political corruption investigation of the past years. For a time now, the relations between president and ruling coalition have been poor. This week, D. Grybauskaitė vetoed "Farmer" initiated taxes, which would have opened the way to healthcare institution reform and reducing the vote bar in the dual citizenship referendum.

R. Karbauskis' pursuits have met with criticism from not only the opposition, but also from his own majority. Seimas NSGK chairman Vytautas Bakas believes that the planned investigation will simply echo his committee's previous work. "I reviewed the questions. They will investigate the same as the NSGK. What am I worried about most? We saw that such investigations tempt politicians to not make decisions which would prevent power centres and immoral politicians, instead using separate episodes of the investigation and completely politicising the results," he emphasised.

V. Bakas is also concerned that the new investigation could "drown" initiatives on civil property confiscation, political party financing and lobbying reviews. "The power centres would applaud this again," he said.

Instrument for dealing with the opposition

The opposition is strongly against the new parliamentary investigation. According to the chairman of the largest opposition power, the Homeland Union – Lithuanian Christian Democrats, Gabrielius Landsbergis, this initiative is a political tool to deal with the opposition, thus he intends to urge his colleagues to ignore it. "If Lithuania is a democratic state, people should simply not participate in such investigations, not opposition groups, not Lithuanian institutions, which represent the Lithuanian people and not Agrokoncernas," he stated.

Lithuanian Social Democrat Party chairman Gintautas Paluckas believes that by creating a new investigation commission, the "Farmers" are gearing up for the coming electoral campaigning and will seek to show how good they are and how everyone else is "bad, thieves." At the same time, G. Paluckas noted that the parliamentary investigation could be viewed as revenge against D. Grybauskaitė for her vetoes.

Seimas Liberal Movement group prefect Eugenijus Gentvilas highlights that the new investigation will not analyse essential political processes that could have been influenced by foreign business groups or structures. "I understand that there will be much pomp, noise, untruths and interpretation again. Most important, the ruling majority will be able to say they have investigated and found everyone to be black and only the "Farmers" are green," he said.

Former prime ministers A. Kubilius and Algirdas Butkevičius, who lead their respective cabinets during the intended investigation time period are indignant over R. Karbauskis aims. "Unfortunately, the Constitution and Seimas Statute do not protect from the majority's stupidity, which I believe is reaching a critical mass," A. Kubilius told lrt.lt.

A. Butkevičius maintained a similar stance. "When people lack competence to resolve the issues arising in the state, implement an prepared strategy, when they are unable to fulfil promises made to the public, then they live in the past and criticise others," he stated.

President will not be dangerous

According to Vytautas Magnus University professor Lauras Bielinis, the "Farmers" will not find it difficult to initiate the parliamentary investigation given their numerous and disciplined majority.

"We will see, how it will proceed. That the investigation is initiated by a single individual – R. Karbauskis, I would link to several aspects. One – his personal ambitions and desire for revenge, another – the nearing elections, prior to which it is always beneficial to highlight opponents' weaknesses and distort their image," the political scientist told Lietuvos Žinios.

In his opinion, the upcoming investigation could cause tensions among coalition partners, however it will not lead to a break up. "Today the "Farmers" feel rather at easy, the Social Democrat Labourites are no longer the golden card they have to play and safeguard. If Social Democrat Labour votes otherwise, the "Farmers" will always be backed by the Poles, they will come to terms with Order and Justice. All this is a well-developed strategy of a single political party's domination," L. Bielinis stated.

He did not deny that this investigation also targets the president as a form of vengeance. Supposedly, her and the "Farmers" relations were never warm. "D. Grybauskaitė just never saw them, didn't notice, ignored. But with them becoming an ever more real power, she is forced to communicate with them, even if through various conflicts, disagreements and differences of interests," the political scientist noted.

In his opinion, the president's relations with the majority will be especially difficult in the last year of her term. "A confusing time period awaits, three consecutive elections will be held, each having numerous interested parties. The "Farmers" are particularly interested in winning the municipal elections, while not caring as much, who becomes president. Likely they will seek ways to weaken those they deem unsuitable," L. Bielinis guessed. In his opinion, the "Farmers" will view D. Grybauskaitė in her final year of term as "a formal figure, formal institution one needs to pay attention to when there's no reason to oppose it or that you can disregard if there are other interests." "The president will be irrelevant and no threat to them," the expert stated.

Mykolas Romeris University lecturer Rima Urbonaitė believes that the future investigation project is so abstract that in essence it can be called "chasing a black cat in a dark room."

"It is completely unclear, where the investigation will turn. Based on what is written, anything you want could be investigated. In other terms, all means of manipulation are made available," the political scientist told Lietuvos Žinios. She did not dismiss the possibility that one of the investigation's directions could be linked to the president's activities. This possibility, the expert notes, is strengthened by the inaccurate assumptions that the head of state will become more lenient and patient toward the majority as her term nears its end. "I believe the tensions between them will remain until the end of term. It would appear that the president is unwilling to back down. That she cannot run for a third term may actually only encourage her to be more active," R. Urbonaitė said. As such, she notes, the majority should be prepared for strong criticism from the president.

Mykolas Romeris University docent Virgis Valentinavičius believes that the "Farmers'" investigation is primarily created for the coming elections. "R. Karbauskis is noteable for his ability to gather electoral ammunition early. Nasių Vasara (Naisiai Summer) is the best proof of it," the political scientist told Lietuvos Žinios.

He reminded that the referendum against Visaginas Nuclear Power Plant and that against land sales to foreigners aided the "Farmers" in winning the Seimas elections. "Now with the presidential and a little later – Seimas elections nearing, another show is being created. Thus, it is natural that D. Grybauskaitė could be one of the targets. R. Karbauskis is a classical figure of political demagoguery, providing the public with enemies and fighting them," V. Valentinavičius stated.

In his opinion, it would be good if in the final year of her term, D. Grybauskaitė would remain as she has been throughout the presidency – demanding, strict, critical and direct if anything is done badly. "However it is concerning that in her final annual address she as if withdrew, he position "softened", as If preparing for an end of term "honeymoon." Her tone was obviously softening," the political scientist said.

In his opinion, the president could have yielded to R. Karbauskis' blackmail over the investigation and commission. "And needlessly so. There is nothing to lose in the final year of term, thus it becomes more purposeful to continue a demanding critical stance toward the cabinet and Seimas," the expert believes. D. Grybauskaitė vetoing two pieces of legislation from the majority, proves nothing, he observes, while the tax reform, which is just a redistribution from one drawer to another, would not have been signed by her half a year ago. "And now almost without any disputes, she signed such an absurd, inconsistent and hollow piece of legislation. Such a signal is very bad," V. Valentinavičius said.

According to him, the president has all the possibilities to ridicule the majority and primarily R. Karbauskis' modus operandi, efforts to portray that "only he ensures order and everyone else is corrupt and weak." "The basis of D. Grybauskaitė's lasting popularity has been her demanding attitude to Seimas and cabinet. If she yields this basis, perhaps in gear of losing popularity, she will lose it," the political scientist noted.