Žygimantas Pavilionis. Putin-Trump meeting, do we have the strength to face this challenge? 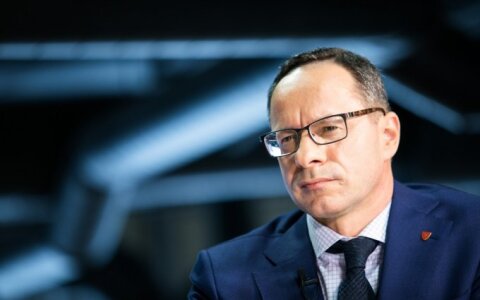 Putin is winning? While the Russian national team dropped out of the football championship, just the championship itself was a propaganda victory for Putin.

Millions of people, drawn to screens, which among other things were filled with Gazprom advertisements, it paid off. Perhaps not the same as the last Winter Olympic Games in Sochi, when Crimea was occupied. However, the meeting with US President Donald Trump in Helsinki is an inherent victory for Putin – humiliated by international isolation and sanctions after the occupation of Ukraine, economically weak and intent on breaking down the post-war order and recreating its empire, the Kremlin has undeservedly returned to the highest league today.

Despite failing to accomplish any core conditions – withdrawal of troops from Georgia (despite promising to do so a decade ago based on a plan by Sarkozy), from Ukraine (despite commitment in the Minsk Agreements), having bombed Syria, not to talk of interference with elections in the West, daily hybrid, information and energy warfare against us, a destroyed democracy and active efforts to destroy it in the entire region, today Putin is receiving a consolation prize for nothing.

Usually such signals received at the top of their glory encourage dictators to act even more aggressively. The West's openness – Tony Blair's initiative to open the G-7 to Russia, Barack Obama's reboot or George Bush's observation of a soul were exploited by Putin as Western weakness, naivety or even stupidity. And he forges onward. The time is ideal – summer, most Europeans are on holiday, the championship has ended, Nord Stream 2 is agreed to, at least in Europe. All that is left is to convince President D. Trump to legitimise Putin's aggression in the region and forge ahead.

The real results of the Putin – Trump meeting will only surface after time passed, but it is already clear that the US president's desire to create "special" relations with Russia, also accusing the US, not Russia for the current state of relations is a danger signal for Lithuania. Unfortunately, even the occupations of Georgia and Ukraine were unmentioned despite Russian aggression in Ukraine having been the core reason to cut the previous dialogue. Ten years ago, denying President Bush's policy similarly and closing his eyes to the occupation of Georgia, President Obama spoke the same. The cycle of history turns anew. Much work awaits the holidaying Lithuanian diplomacy.

It is obvious that the developing US-Russian dialogue could become a fundamental challenge to Lithuanian interests. From now on our diplomacy (and the increasingly holidaying cabinet) must focus all resources on defending and reinforcing these interests: US/NATO force permanent presence in the Baltic States, our air defence, united combatting of Russian cyber, information and energy attacks. We must present a clear condition to Washington – if you intend to continue playing diplomacy with the Kremlin at this level, you must maintain a troop presence in the Baltic States, also aid us in closing Astravyets NPP, as you are currently aiding in halting Nord Stream 2.

Of course, if we wish for Trump to hear us, a few good pictures and handshakes will not be enough. Lithuanian diplomatic and financial resources allocated to the US is currently embarrassingly minimal – many tens of times less than what we dedicate to Brussels and other EU countries, where we have an embassy in each country. Meanwhile we cover the USA at only four points (Washington, New York, Chicago and Los Angeles), while our honorary consuls work in a smaller part of US states despite them often having more influence and greater size than some EU countries. Unfortunately, we are currently only pioneers discovering the USA.

Our businesses are only beginning to enter the USA and our links to the US Lithuanian community are maintained primarily at the initiative of the community itself, not the state, while failing to decide on retention of citizenship could sever such links... Only five ministries are seriously working with the USA – foreign, national defence, agriculture, economy and culture.

All others talk much, but do little. There are at most five or six people in Seimas, who have strong links to the US Congress, most being on the political right. Meanwhile our head of cabinet has still not made a visit to the United States. For now, relations with the USA are maintained at the highest level only thanks to presidents – earlier by Valdas Adamkus, today Dalia Grybauskaitė, but even this historic line may be ended soon.

If we do not wish to become a part of the Trump – Putin menu, we must courageously, perhaps even outrageously, sit down at the table ourselves and offer a menu ourselves – not just solutions in our region, but in Russia itself, whose democracy the Western world sacrificed to Putin eighteen years ago. We must not only create a future for the Russian people, but also defend the ability of Ukrainians, Georgians, Moldovans and finally Belarussians to choose the alliances they wish to belong to.

Currently it is Putin, who has stolen away these nations' ability to choose. I believe that a time will come that the US president will shake hands with national representatives, who fight for freedom in the region, rather than kill it. I believe that we will see this sight at the end of the Trump presidency, all US presidents met Putin in the summer, exchanged warm statements and all US presidents end came in the winter when relations were frozen and hopes dashed. I believe that Trump will wake up from Putin's sirens much faster – this was so far demonstrated by the US president's actions (not just words).

Finally, President Trump, as his critics, should not forget that he represents not solely the USA, but all of us, that is to say all free and democratic states united in the EU and NATO, which operate on values first enshrined in namely the US Constitution. Putin is not and never will be a supporter of these values, he has been, is and will continue to be their opponent. Putin is not and cannot be equal to us, his place is next to other dictators of the world, in history's waste dump.

The only US president to now – Reagan – managed to not meet any Soviet leader during his first term and when he did meet, he did so from a position of strength, clearly knowing what he wants, what he defends and what he seeks. Reagan understood well that the only language Soviet leaders understand (Putin not only is, but even claims himself that he is a successor of this system's rights) is power and only if you have something behind your back that you can talk softly. So far it is unclear, what path President Trump is choosing, but let us hope that he will not repeat the mistakes of past US presidents. Whether we in Lithuania will manage to defend these values and our interests, form an agenda for the West, which would reflect our core interests or whether we will yield to the new wave of dialogue with the Kremlin, we will soon see.

The supporters of dialogue with the Kremlin will certainly exploit the Helsinki meeting, seeking to convince us of the necessity to accept the "legitimate" interests of the Kremlin and to seek pragmatic relations with the Kremlin. Unfortunately, history has proven many times before, what such "dialogues" end with – typically with the reinforcement of Putin's interests.

I believe that we will not make this mistake, that we will not yield to temptations to break our alliance. We must continue setting an example, investing in defence, uniting the West and our region, consistently and firmly defending our interests. Same as our president did in the NATO summit meeting recently (up to now criticised by Kremlin supporters for her firm line, even though it was this way that Reagan changed our world and we, during the Adamkus – Grybauskaitė terms managed to secure our freedom).

I am convinced that at the end of his term or perhaps even earlier, Trump will act same as we have so far. Trump's first year, meeting with the Baltic States' leaders prior to meeting Putin, also respect for our president, this is the basis on which the holidaying cabinet of Skvernelis must build a palace. That is, if it does not decide to use this historic moment and take to the other side of the barricades.

Žygimantas Pavilionis. Putin-Trump meeting, do we have the strength to face this challenge?