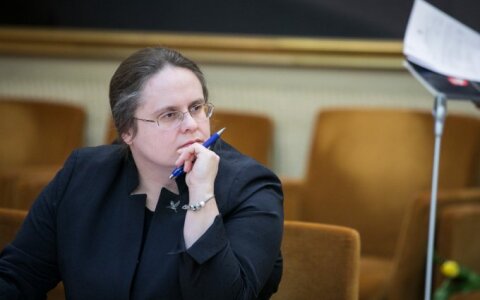 A law enforcement investigation in Russia against law enforcement officers hearing the January 13 case in Lithuania is a desperate attempt to deny the tragic events, Agnė Širinskienė, chair of the parliamentary Committee on Legal Affairs, says.

"It seems a desperate attempt to deny the January 13 events at any cost and downplay what happened when there was an attempt from the Russian side on the people of Lithuania's freedom and their lives," she told BNS Lithuania on Monday.

Russia's law enforcement on Monday opened cases against Lithuanian judges and prosecutors hearing the January 13 case. The probe was launched based on an article of the Criminal Code of the Russian Federation on "knowingly bringing an innocent person to criminal liability“.

According to Širinskienė, similar liability does not exist in democratic countries.

This case should not affect the January 13 proceeding in Lithuania.

"I very much doubt that it will have any influence on the case hearing in Lithuania. Even more so, Russia has so far refused to cooperate with Lithuanian law enforcement on issues related to this case," the MP said.

A total of 67 people have been charged with crimes against humanity and war crimes in the January 13th case, with the majority of them standing trial in absentia. Lithuanian prosecutors have proposed sentencing former Soviet defense Minister Dmitry Yazov and several other army officers to life in prison.