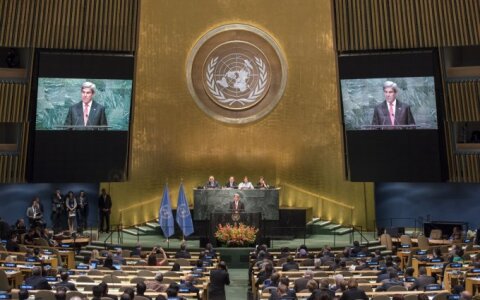 The United Nations Human Rights Committee has called on Lithuania to fully investigate suspicions that a secret CIA prison operated in Lithuania.

"The Committee is further concerned that pre-trial investigation No 01-2-00015-14 has not been completed, that no suspects have been identified, and that all information on the progress and results of this investigation has been kept secret," the committee's conclusions read.

The European Court of Human Rights ruled on May 31 that Lithuania had hosted a secret CIA prison in 2005- 2006 for suspected terrorists. The Strasbourg-based court ordered Lithuania to pay 130,000 euros to Abu Zubaydah, a Palestinian born in Saudi Arabia, for arbitrary detention in Lithuania.

Related articles
Lithuanian govt holds consultations on ECHR's CIA prison ruling
R. Bogdanas. To whom in Lithuania did x US millions go to?

The Lithuanian government plans to make up its mind in August as to whether it will appeal this ruling. Lithuanian officials told the ECHR the premises in Antaviliai near Vilnius were not used for a prison but for an intelligence support center.

The UN committee also called on Lithuania to investigate the complicity of state officials over human rights violations in the case of Abu Zubaydah and any other secret detentions.

"The state should also take the appropriate measures … to ensure perpetrators are prosecuted and, if convicted, punished with appropriate sanctions and that victims have access to effective remedies.," the UN committee said.

"It should also complete pre-trial investigation No 01-2-00015-14 within a reasonable time and ensure effective transparency and public scrutiny of its outcome," the conclusions read.

The United Nations Human Rights Committee makes regular assessments of countries' compliance with the International Covenant on Civil and Political Rights (ICCPR). The situation in Lithuania was discussed at a meeting in Geneva earlier this month.

The UN committee also called on Lithuania to ensure LGBTI rights. It criticized Lithuania's Law on the Protection of Minors against the Detrimental Effect of Public Information, unduly restricting the freedom of expression regarding LGBTI issues.

The UN committee also expressed concern that same-sex marriages are still not legally recognized in Lithuania, and also criticized the country over the lack of clear regulation regarding gender reassignment procedures.

The committee also called on Lithuania to ratify the Istanbul Convention on violence against women. The ratification of this document stalled in Lithuania as the Church and some politicians say the country will have to change its gender concept and introduce provisions on homosexuality.