A riddle for our time: who are the grey cardinals? Part Two 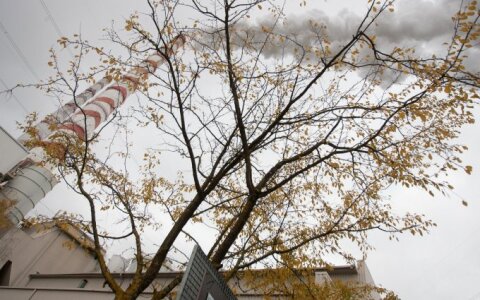 They won the auction… But did they

Mr. Skvernelis also mentioned that by protecting these Lietuvos Energija projects, other rivals could be eliminated. The 2013 auction incentive auction for a biomass-winning company became one such rival.

In 2012, Lithuania decided it was going to support renewable energy. In the National Energy Independence Strategy, as one of the priorities in the field of electricity production, the Strategy indicated renewable resources - giving preference to biomass cogeneration plants.

The Strategy states that by the year 2020, the state will create preconditions for increasing the total capacity of biofuel power plants connected to power grids up to 355 MW.

Related articles
An unsolved equation: who needs two more cogeneration power plants for Lithuania?
A riddle for our time: who are the grey cardinals? Part One

Already in 2013, the National Control Commission for Prices and Energy (NCCPE) was auctioning incentive quotas for biomass power plants with an installed capacity from 30 kW to 5000 kW. At this promotional rate, the state undertook to buy electricity from winning enterprises to buy at prices higher than the promotional rate, thus supporting renewable energy.

The winners were manufacturers offering the lowest desired flat rate, which would be valid for 12 years from the date of issue of the permit for electricity production. On 20 June. It was announced that five projects won the auction.

However, shortly after the amendments to the Law on Renewable Energy were adopted at the Seimas on 2 July 2013, reducing the incentive total installed capacity from the previously forecasted 355 MW to 105 MW, which meant that the winning companies were left in limbo.

These amendments were drafted by the Ministry of Energy, where one quote was set at 200 MW. The latter amendment or the Act however, was adjusted by the proposal of one of the members of the Seimas Economic Committee, Arturas Skardžius. Skardžius Suggested reducing the quota to 105 MW. The Economic Committee approved this. It is this number that appeared in the final project.

It turned out that until such time the amendments were made, the incentive permits to produce and develop already made up the quota of 88.75 MW. Therefore, with the addition of the 41.09 MW quota allocated to the auctioning of incentive quotas, the purpose of the law was exceeded by almost 24%. For Mr Skardžius, a proposal like this could have been useful for reducing the total quota from 355 to 105 MW in biomass segment while in other segments, such as wind or sun where Mr. Skardžius has interests, it could have been increased.

However, the National Control Commission for Prices and Energy noted that with the introduction of a quota for biofuels equal to 105 MW, quotas for other technologies - wind and the sun - have not, however, been increased.

At that time, the chairman of the then Economic Committee, Remigijus Žemaitaitis, proposed not to raise the quota to 355 MW as planned in the strategy, nor to 105 MW as suggested by Mr. Skardžius, but to 140 MW. In November he filed another proposal - to increase the quota to 200 MW, as in the original version, and as proposed by the Government and the Ministry of Energy.

At the time, Mr. Žemaitaitis remembers that these proposals incurred the anger of Mr. Garasimavičius. "I remember how he attacked me in the Economic Committee, as to how dare I deliver such a project and that he would hand me over to the Special Investigation Service (SIS) because of my alleged corrupt character. I argued with him and said that the more producers we put on the market the better for us. It was very strange to me when the quota was reduced to 105 MW, but my suggestions were not very satisfying to Mr Garasimavičius and not even at that time to then Prime Minister Algirdas Butkevičius. As they applied pressure, they even ordered that the project be withdrawn, through which I proposed an increase of the total amount to 200 MW, "said Mr. Žemaitaitis.

Mr. Skvernelis was asked if the setting of the biofuel quota had not been previously set at 355 MW, and if 105 MW could have been one of the obstacles; Skvernelis was not suspicious: "Of course. Those companies that received the permits legally, as the court pointed out, had to really complete their project development. Now everything has been done in such a way that not only one company has been placed in such a condition that they would not be able to work and participate in this market, even though the state itself has granted them the quota in accordance with all legislation. "

Mr Remigijus Žemaitaitis, project visualisation developer, remembers that Mr. Garasimavičius was particulary interested in bio fuels and everything related to it. "In the Seimas, at times we didn’t understand who represented what, especially on renewable energy. It seemed as though the proposals were good and in line with the general energy law, but for some reason the Government came up with other proposals.

Another thing was the same solar permits that were signed at three times more than the quota was but somehow the ministry and the government did nothing about this. Everything was left to the Seimas," said Mr. Žemaitaitis.

Lietuvos Energija – the new player in 2014

On 28 May 2014, Algirdas Butkevičius’s government engaged yet another player among heating and electricity producers Lietuvos Energija after announcing the decision that the company would implement the projects establishing the Vilnius and Kaunas cogeneration plants.

The government’s decision recognises that the Vilnius and Kaunas cogeneration plants are projects that are economically important for Lithuania which must be implemented no later than 2020. The decision also acknowledges both projects must be set up at not less than 51% of the shares in the state-owned company Lietuvos Energija.”

The Government resolution recognizes that the Vilnius and Kaunas cogeneration plants are projects of great economic significance to Lithuania, which must be implemented no later than 2020, and both projects must be set up no fewer than 51 percent of the shares in the state-owned company Lietuvos Energija. Mr. Zemaitaitis noted that at the time of the auction being held and afterwards, Mr. Garasimavičius was a member of the Supervisory Board of Lietuvos Energija.

What’s important is that these two power plants intend to burn not only biofuels, but also waste from which they’ll produce energy and heat. Lithuania already has such a waste incineration plant in Klaipeda. The main shareholder is Fortum Heat Lietuva, a Finnish capital company with 95 percent share ownership. The remaining shares belong to Klaipėdos Energija.

In 2014, Fortum Heat Lietuva also won a partner competition in the Kaunas cogeneration project. These projects developed by Lietuvos Energija therefore became cometitors in the heat sector auction. Additionally, the same winning companies became competitors to Lietuvos Energija because of their incentive rate as four of the five auction winners had to be developed specifically in Vilnius and Kaunas.

When the Lietuvos Energija project was recognised as being economically important for Lithuania, the auctioning of incentive tariffs for other winning companies was even more intense.

Such an impression came from the former chairman of the State Commission for Prices and Energy, Virgilijus Poderys - now Chairman of the Energy Commission of the Republic of Lithuania. "In 2013, in the middle of the auction organized by the Commission five projects were won. So the Energy Commission got permission to develop those projects. However, in the middle of 2014, the government passed a resolution clarifying that it is developing cogeneration plant projects in both Kaunas and Vilnius.

These five projects soon started encountering administrative, procedural and procedural disasters as well as all kinds of surprising demands despite qualified and experienced people developing said projects. Delays and endless court carousels began. At the beginning of this year, possibly in January, Foxita approached saying: We’ve already won four court cases and we’ll win the fifth, but at the same time the State Energy Inspectorate (SEI) is still refusing to issue a permit.

What I want to say at this point is that there is an impression that the most varied administrative disturbances came about, which in some cases did not exist in other projects, because the plants were not state projects (i.e. the Lietuvos Energija cogeneration projects - DELFI). Stymied privately, the state goes further. There’s an episode like this in this story", - says Mr. Poderys.

Asked who could benefit from this, Mr. Poderys did not respond directly, but cautiously noted: "One of the interests, at least in Kaunas, is probably very simple, since the cogeneration plant produces both electricity and heat, which means that in the case of heat, there wouldn’t “be enough place” for the Kaunas cogeneration plant if there were the other projects - Foxitos, Danpower. There would therefore not be enough place for it and would not be able to compete with the heat price in Kaunas.

Nerijus Rasburskis and Director General of Lietuvos Energija until September 2017), Dalius Misiunas, along with Tomas Garasimavičius, were the godfathers of these projects. It seems to me that’s no secret to anybody. It’s very that’s apparent from the way things are said, presentation of information, etc. There is nothing new here," he said.

While the cogeneration projects developed by Lietuvos Energija proceeded swiftly, due to the the aforementioned Government resolutions were mandated to subordinate institutions and examine documents related to the implementation of the power plants. They also made sure to ensure the decision-making process took place in the shortest time possible, with the winners of the auction facing various obstacles until they finally hit the wall.

The development permit was not suspended for GECO-Taika, the shares of which are held by Danpower Baltic. The Ministry however stated that the promotional tariff will not apply to Danpower as they had already reached the quota for biofuels of 105 MW.

The State Energy Inspectorate made unfavourable decisions with respect to Foksita (shareholders - Aliases LTD, registered in Cyprus, "Šiaulių banko investicijų valdymas" and Algimantas V Stasiukynas). It must be noted that in the case of the Inspectorate, the Supreme Administrative Court of Lithuania finally adopted the "Foxites" in April this year in a dispute with the Inspectorate. This information was confirmed by the Minister of Energy Zygimantas Vaiciunas’s press officer, Aurelija Vernickaitė.

Projects related to Danpower were also embroiled in court proceedings. As the Baltic News Service wrote, in January this year the court’s final judgement was that the Ministry of Energy illegally suspended Danpower's investment in a new biofuel power plant in Vilnius. In May this year, outstanding disputes between the state and the company were put to an end by signing a peace treaty.

The incentive tariff was returned to the company for the electric plant in Kaunas as the company refused to further develop the Vilnius project. It should be noted that Kaunas Cogeneration Plant, managed by Lietuvos Energija in association with Fortum Heat Lietuva, also claimed that in this case a claim for the peace treaty was submitted as the return of the incentive tariff to the company "could directly damage the Kaunas plant which was recognized as an important economic project for the state".

A riddle for our time: who are the grey cardinals? Part Two