US army chief thanks Lithuania for support in fighting terrorism 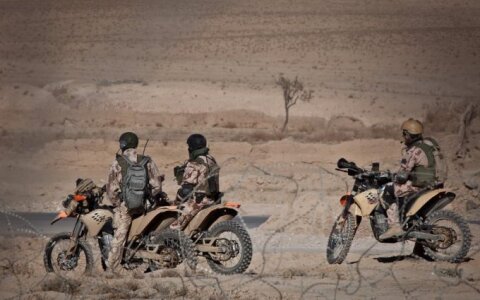 Chairman of the United States Joint Chiefs of Staff General Joseph Dunford has thanked Lithuania for its support in fighting terrorism and reiterated further commitment to the security of the Baltic Sea region.

One Wednesday, the US army's highest-ranking officer met with Chief of Defense of Lithuania Lieutenant General Vytautas Žukas.

"Gen. Dunford thanked Lt. Gen. Žukas for Lithuania's military contributions to the fight against terrorism," according to the meeting's readout.

It also states that the United States "remains committed to its strong bilateral relationship with Lithuania and the security of the Baltic region".

The Lithuanian and American generals discussed the existing security situation in the Baltic region, interoperability, and joint training, and "agreed to continue to strengthen cooperation and improve capabilities through modernization".

Lithuanian special operations soldiers are now taking part in a NATO mission in Afghanistan, aimed at training local forces, and the Baltic country has also sent instructors to Iraq.

Lithuania is currently trying to convince the United States to redeploy its troops for permanent presence in the country and hopes for Washington's support in ensuring air defense.

US army chief thanks Lithuania for support in fighting terrorism