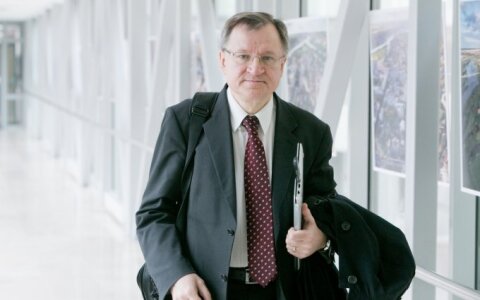 We do not yet know which candidates will formally compete for the right to be the country's top person, so we must remember presidents can of course vary. Do we have a real free choice, or will the candidate only be picked from the menu presented by chefs of the restaurant "Lithuanian Political Cuisine"?

The political ideology of a candidate - liberal or communist - is not so important. Already today, nobody can say what presidents Adamkus or Grybauskaitė truly felt ideologically. It was Brazauskas who was the last to hide links with his party's ideology. The better option is to have a non-traditional political past than traditional one, voters do not need ideologues, and they need to better understand "practical" managers. It's better to a have president able to say "NO!" Someone not to avoid political battles, but a president to show some backbone if "something happens".

It would be good to have the president be a university graduate at least. He or she has to be educated to know at least something (no president was working as professional president) - the doctor's diplomas are good, but not necessary (once upon a time "Cambridge" was subject for jokes). General education has to be above average. Good if he can write and dance: show business is understandable, academic activity is only respected. But if he already speaks, this is better to use more common language with some basic international words. A president has to distinguish some (not all) tricky things – what is the difference between financial and fiscal policy... (it's good to know what ecology is by definition and how different are the Flemish and Walloons, what is the difference between major and minor in music). It's good if they solve crosswords and Sudoku.

The president must be a middle-class property owner. Having too much creates endless discussion of why he or she is rich, whether they are or are not legally rich. Possessing nothing will peg you as a hopeless loser. The non-traditional candidate has to feel safe saying the main motive for people to strive for the post is certainly not a salary or a governmental residence house. One has to be careful not to curtail themselves, but instead to convince you to respect the presidential institution as your country. A cheap president is easily bought and sold, but the rich ones do not have public respect.

The candidate has to be a recognised enough person for public discussions in both rural fields as well as in city bars. The candidates the public do not have opinion about are in the worst position. A bad opinion is better than no opinion. A good feature is the ability to explain strategic goals and tasks in one sentence, rather than politically correct abracadabras and false statements. The candidate must be quoted easily, i.e. "there will be order." Voters must think that the candidate speaks English well and eats as a normal Lithuanian does – both pork and potatoes.

Traditional understanding of sex is better, that special "gender". Despite the efforts of feminists, women in Lithuania are more likely to vote for "cool" boys than for loudly screaming "girls", whereas men vote mostly for clever men, and for women if they are attractive. Women are elected mostly when men decide to vote for them. Unmarried men – no chance. If the candidate for First Lady looks like a stereotypical blonde, it's better not to run at all. Alma Adamkienė is an ideal of all times: bright, modest, shining.

Age without extremes. A good president no longer a rides motorcycle, but is still able to dance at a ball in Vienna. He cares for himself instead of being under the control of a medical team.

The non-traditional president has not only a surname, but also a nickname linking him or her to publicly undisclosed secrets of a private life or the "shadows" of the past. The history of sin and repentance today is far more interesting than the history of some textbook success story. We are a nation with a painful history of unfulfilled dreams, so the lurking and rising persons are people to look up to. Ideally, cultivated polyglots and wunderkinds are not preferable, but "nice boys and girls" will be rejected as well. The best choice is an intellectual from rural or proletarian uptown environment (like me! ha-ha)

And what do we have? Think of how we imagine a future non-traditional president. I've got some hypothetical models that can please and satisfy our dreams.

The Caretaker Jesus. The president, who "communicates" with the people every day, exposes how he cares about the troubles of your everyday Lithuanian. He genuinely understands that the situation in the country is bad and wants to cry, that's right even the president wants to cry. And he cries. The chorus repeats that Lithuanian children have take virtuous paths, but they get side-tracked into temptation until finally they eventually emigrate. He is a beloved by the people kind of person - after all, it's fun for everyone to feel that even they feel cared for by the president. There is a great chance for him or her to have two terms in office.

Warrior. He stomps his foot and reminds us every day how he hates oligarchs, corrupt politicians, "bought" media, and often calls upon the Defence Council, but sees the most important enemies inside the country. The warrior enjoys concerts, public events and awards ceremonies for citizens. When not fighting someone, he creates and quotes the wonderful history of Lithuania, where everyone takes "strength from the past". The potential of combat often goes away during the first term of office, and the Warrior is disappointed by the weakly fighting "people" and starts assembling a new army – but not necessarily a winning one.

Manager. He or she understands very well that children of happy nation "work for the benefit of the country and human well-being". The "axis" of the Annual Address is about the dynamics of GDP and Lithuania's place in the world according to the main indicators of prosperity. The more numbers, the better the Address. His or her success story is the ability to prove their idea that "good for the country and people" really works. The manager is proud of their term as president and the second term is more dependent on metrics than presidential abilities.

Nice Guy - Nice Guy is a picture of the will of the nation, travelling around the land with a smile (foreign policy opportunities never run out). They look good, are always quoted by the media and remain the soul of public celebrations and are the "sun of Lithuania." Men, women and children alike want to take a photo with Nice Guy although they don't always know what to talk to him or her about and why. The people have fallen in love with Nice Guy being aware that the present is there to represent, not manage. If there is no war, two terms are secured.

Puritan. The Puritan generally sits in the office behind closed doors as they work very seriously, lonely considering and understanding the value of his or her signature. For the same reason, they work only in the areas they are responsible for and clearly state without fear that their power is not so great. They believe everyone is equally right, so everyone is equally disappointing. A second term is unlikely.

Diplomat. The Diplomat possesses ready answers to questions about events in Lithuania. "I cannot come because I'm out." They represent a country in the world as a president has to. Their most important homework is to tell their people that it's important over there, not here. What is important here is that the country "blossoms united." the more insane the international situation is, the more people will be at war and the possibility of a second time becomes more realistic as a result.

Football referee. The football referee treats everyone equally, but is universally disliked because everybody thinks he or she has been bribed by the other side. A second term is possible but in the end he is left guilty for everything.

.............. And here's the place for your advertising, for your choice, to record that fresh non-traditional president with a real name. Good luck when making a choice!