Israeli PM met with protests in Lithuania over Palestine 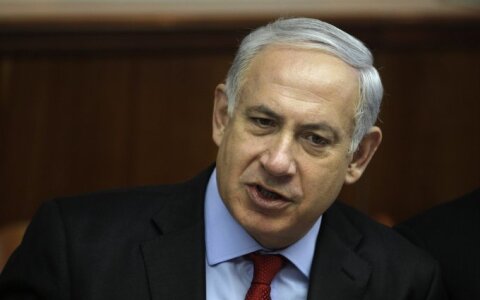 Several dozen supporters of Palestine staged a demonstration outside the Lithuanian government's building in central Vilnius on Thursday ahead of Israeli Prime Minister Benjamin Netanyahu's visit.

Holding Palestinian flags and banners, the protesters condemned Israel's actions in the occupied Palestinian territories and chanted that the Israeli prime minister is not welcome in Lithuania.

"We want to tell the Israeli prime minister that his policy of the past decades in unacceptable, and we want to ask the Lithuanian government whether we want to communicate with such political figures," Palestine-supporting activist Gabrielė Tervidytė told BNS Lithuania.

"We find Palestine's occupation, the Gaza blockade and the violations of human rights unacceptable. I wouldn't want the Lithuanian army to use Israeli weapons tested on humans," she added.

Ahead of Netanyaju's visit to Lithuania, Brussels officials also condemned the expansion of Jewish settlements, being carried out by Israel.

Maja Kocijančič, the EU spokesperson for foreign affairs and security police, said the settlement issue undermines efforts to create the State of Palestine.

Israel says the EU's criticism is unfair and hopes the Baltic states will help to soften criticism.

Traditionally, Lithuania is among the staunchest diplomatic supporters of Israel in Europe, in part because of the Holocaust history and the coordination of positions with the United States. But Lithuanian diplomats have lately been forces to balance between different EU and US opinions.

During his four-day visit, the Israeli prime minister will meet with his Baltic counterparts, Lithuanian President Dalia Grybauskaitė and members of the Lithuanian Jewish community.

Israeli PM met with protests in Lithuania over Palestine