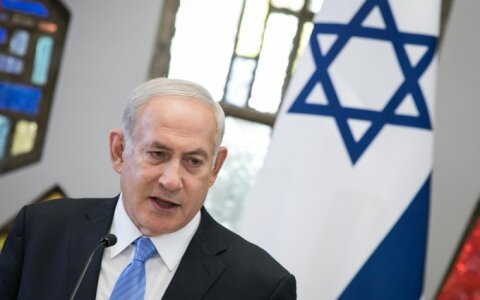 Speaking after a meeting with the three Baltic prime ministers in Vilnius, Netanyahu strongly criticized the European Commission's decision, announced on Thursday, to provide 18 million euros to Iran.

"I think that the decision yesterday by the EU to give 18 million euros to Iran is a big mistake. It's like a poison pill," he said.

The European Commission said that the aid package was part of an effort to keep the Iran nuclear deal alive.

The US has withdrawn from the deal and announced new sanctions. Israel has called on European countries to follow suit.

Netanyahu said in Vilnius that the deal had only encouraged Iran to carry out a nuclear program that would open the way for the development of a nuclear weapon.

"All countries should join the efforts to restore sanctions on Iran in order to press them to stop their aggression and (...) terrorist activities," he said.

Netanyahu also said that he had asked his Lithuanian, Latvian and Estonian counterparts to help change what he called Brussels' "distorted view" of Israel.

Lithuanian Prime Minister Saulius Skvernelis told BNS that Lithuania backed the EU's common position to support the Iran deal, but added that he "perfectly understands Israel's arguments because they are based on concrete facts and specific information".