Mažvydas Jastramskis. Will the people re-elect the “Farmers?” 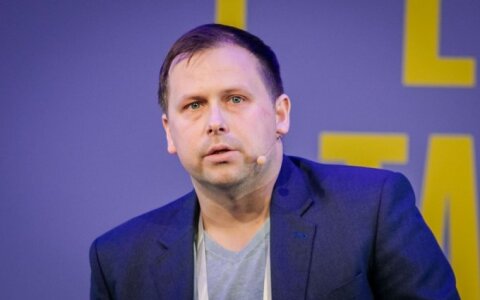 The Seimas and cabinet's term has reached its halfway point. Increasingly many analysts wonder what is in store for the ruling coalition in the future.

Of course, the coalition also features Gediminas Kirkilas' Social Democrat Labour. To them, everything will hang on whether they can agree on a joint electoral roll with Ramūnas Karbauskis.

Related articles
TS-LKD members are confused: what game is a potential presidential candidate of theirs playing?
Gitanas Nausėda: We have lost our compass

If they try going on their own, both in next year's [municipal elections] and in the Seimas elections, it will be tough. It would appear that after the initial confusion of Social Democrat sympathisers, the ratings have settled more in the favour of Gintautas Paluckas' party.

Returning to the "Farmers", ambitions are greater here: the post of president, perhaps re-election in the 2020 Seimas elections. It would appear that serious analysts do not feel like such ambitions are excessive. Thus, will the "Farmers" have good cards?

While the presidential elections will be earlier, let us start with the parliamentary elections. The key here, looking at data from prior elections, is simple: the ruling parties always lose.

There are two exceptions. First, speaking of individual parties, there was one, who increased its backing over its term: that is the Liberal Movement in 2012. Second, in 2004, Algirdas M. Brazauskas' Social Democrats retained the post of Prime Minister, even if they lagged behind the Labour Party.

Nevertheless, overall statistics is ruthless to the ruling parties. All coalitions, all parties holding the prime ministership received fewer votes in subsequent Seimas elections, compared to the previous ones. The same Social Democrats of Brazauskas lost impressively with the New Union in 2004 - -30%. The latest two governments lost 20% support each.

Lithuania is no exception among post-Soviet democracies in that the ruling parties are always punished in elections. In 2008, the journal Electoral Studies published research by political scientist Andrew Roberts, who described this phenomenon as "hyper-accountability." Voters demand much from the government. Failing to obtain it, they punish, the cycle repeats.

But hyper-accountability is not irrational: voters punish differently and it depends on the state of the economy. Parties, which rule during declining unemployment (this allows for the best forecasts in changes to votes), lose the least (but still lose).

Together with my colleague Vytautas Kuokštys, we continue to research this phenomenon, have renewed data. And we noticed that Lithuanians not only punish the ruling parties (which is obvious enough). Our punishment (the loss in the ruling parties' votes) average is the largest in the region.

In other terms, the "Farmers" are seeking to be re-elected in the country, which has the most unforgiving and demanding voters in the EU.

I have said that the Seimas elections are tough to predict. I do not deny this and am not seeking to model, how many votes or mandates will exactly be obtained (especially since there's still much time). But the overall trajectory for the ruling parties is easier to estimate, compared to the performance of opposition or newer parties. This is specifically due to hyper-accountability.

The "Farmers'" prospects are further made difficult in that they lack faithful voters with a party identity. Their electorate in 2016 (post-electoral study data) was assembled from those, who earlier voted for other parties or did not vote at all.

Furthermore, the first position in ratings has already been lost.

Thus, even if two years (bar snap elections) remain in the term, theory and data leads to the initial conclusion: in the coming Seimas elections, the "Farmers" will perform worse than in 2016. Quite likely, they will lose.

By how much? Specifically due to the weak party identity, the range is wide. Among the worse scenarios, we see the potential of balancing on the verge of failing to enter parliament. Entrenchment in the party system is also possible, with only a few percent loss.

By the way, we are talking about votes here, not mandates.

Their moderate image and mixed electoral system is to "blame" for the disproportionately large "Farmer" Seimas group.

In short: lightning doesn't strike the same place twice. Further discussion of our electoral system will be done in other comments.

Returning to votes and how many the "Farmers" will lose, this will depend on how the average voter views their work. The economy is the most important, but in our research, we are also trying other factors. It would appear (and is logical) that in post-Communist states, changes in corruption also have an impact.

As such, if they wish to at least not lose (not necessarily meaning to win), the "Farmers" must improve the welfare of the average voter to a significant degree and reduce corruption over the coming year. The aims are simple, but accomplishing them will not be.

This is especially true because under conditions of globalisation, by far not everything depends on the ruling parties. Over the coming year, much can happen in the world and the EU.

What of the presidential elections.

In this case, it is difficult to draw trajectories not only in Lithuania. Elections oriented toward personalities are typically less predictable. This is first of all because party identities (which we have few of already) have a weaker role.

Thus, for Saulius Skvernelis (if he runs for the "Farmers") it could be both a positive and a negative. A negative because the "Farmers" lack a consistent electorate, which could be mobilised (in the real sense), as the Conservatives or Poles do.

An advantage because Skvernelis remains nonpartisan, less associated (than R. Karbauskis) with the party.

In either case, Skvernelis is still the Prime Minister. One of a cabinet, which is already tired, that many voters have been disappointed in and whose evaluation is more so negative.

It is naïve to believe that this will have no influence on the presidential race.

Mažvydas Jastramskis. Will the people re-elect the “Farmers?”