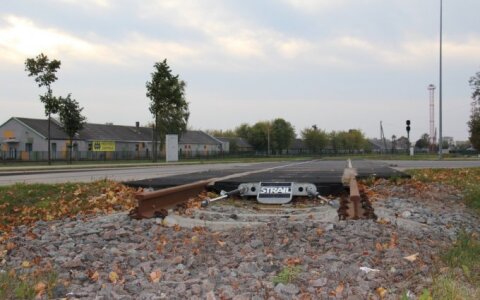 Lithuanian Transport Minister Rokas Masiulis says that Latvians' demand that Lietuvos Geležinkeliai (Lithuanian Railways) pay them over 82 million euros for the dismantling of a railway track to Renge a decade ago came as a surprise to him.

"This shows a very aggressive style. I'd even call it a stab in the back," Masiulis told BNS on Tuesday.

"Normally, before speaking about amounts, talks and discussions are held, positions are presented and the other side is heard. It doesn't look to me like very consistent work. It looks more like political desperation," he said.

Lietuvos Gelezinkeliai said on Monday that it had received a claim from Latvijas Dzelzcels (Latvian Railways) for 57 million euros in compensation for lost profits due to the dismantling of the track. It turned out on Tuesday that LDz Cargo, a subsidiary of the Latvian company, demands another 25.4 million euros.

Latvia also wants to be informed when train traffic between Mazeikiai, in northern Lithuania, and Renge will be restored.

Masiulis said that he has repeatedly assured his Latvian counterpart that the line will be rebuilt.

"There were no indications of a claim and this is why I regard this as an unfriendly gesture," the Lithuanian minister said.

"Latvia is holding elections early next month and I think we have to wait for the elections and speak to those who will be in a position to solve these issues," he added.

The European Commission last year imposed a fine of 27.87 million euros on Lietuvos Gelezinkeliai for hindering competition in the rail freight market by dismantling the Renge track in 2008.

The Lithuanian state railway company paid the fine in early January after filing an appeal to the EU's General Court in Luxembourg against the Commission last December.