Win-win Cooperation is an Unyielding Principal 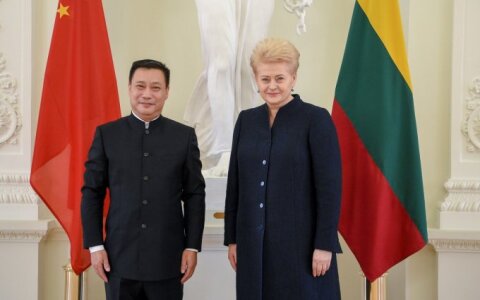 Recently I read Mr. Mantas Macikas' article "National Security Compromised in the Name of Chinese Investment" on the DELFI website. That is purely a pseudo-proposition. His groundless accusations may be out of his ignorance about China, but more likely his obsolete cold war mentality. The article distorts the vision of the Belt and Road Initiative (BRI) and prejudicially deems China’s investment as a threat to Lithuania’s national security. As Chinese Ambassador, I have the responsibility to clarify those misunderstandings and present an authentic Belt and Road Initiative to you.

The Chinese civilization treasures peace. From the bitter sufferings of war and poverty in the recent past, the Chinese people have learned the value of peace and the urgency of development. We are convinced that only peace can bring prosperity, harmony and decent life to the people. China is willing to actively strive for a peaceful international environment to develop itself, and promote world peace through its own development. As what President Xi Jinping said, "The BRI is an economic cooperation initiative rather than a geopolitical or a military alliance." China never engages in aggression or expansion. We take the path of peaceful development. China's bilateral relations with any country do not target at a third country, just like the friendly relations between China and Lithuania is harmless to any other country.

The ancient Silk Road 2000 years ago was a road of trade and friendly exchanges between the East and the West. The BRI inherits this ancient spirit, upholding the principle of extensive consultation, joint contribution and benefit sharing to achieve reciprocity, mutual benefit and win-win outcome based on equality, coordination and cooperation. Mr. Macikas said, 'Allowing China to get involved in Klaipeda Port Project is short-sighted.' I would like to point out the contrary is true. The BRI is not China's unilateral pursuit for economic interests, nor is it 'economic hegemony', 'neo-colonialism' or 'debt trap', but rather a new model of win-win cooperation for a shared future for development, prosperity, harmony and coexistence. In the past five years since the BRI was introduced, the total value of trade in goods between China and the countries along the Belt and Road has amounted to more than US$5 trillion, and China's direct investment in these countries exceeded US$60 billion, creating more than 200,000 jobs for the region.

The BRI is open and inclusive, seeking common ground while respecting differences. We respect the development path and model chosen by each country, and advocate dialogue among different civilizations. As President Xi Jinping said, "The BRI is an initiative that is open and inclusive. It is not small circles nor China clubs. We neither delimit participation by ideology nor engage in Zero-Sum games. As long as there is a wish to join, any country is welcome. I also hope nobody will be so blinded by ideology as to ignore China's development, its contribution to the world and the opportunities brought by the BRI, as is described by the Chinese saying 'A leaf before the eyes shuts out Mount Everest.' "

In the five years since the BRI was brought forth, China and Europe have successfully developed new models for cooperation. More than 10,000 China-Europe Cargo Trains have been operated to connect 34 cities in 12 European countries including Lithuania, promoting China-Europe economic and trade cooperation to a great extent. Thanks to these intercontinental rail links, the logistics cost of land transportation has been lowered by 5%, the customs clearance speed increased by 30%, and the contribution to the EU's overall international trade exceeded 6%. In the past five years, the Third-party Cooperation mode has been successfully applied on Belt and Road projects. The collaboration between Chinese companies and MNCs such as Siemens, ABB Group and EDF has spread through the countries along the Belt and Road. The Asian Infrastructure Investment Bank launched under the BRI has attracted the participation of many European countries including the UK, France, Italy and Germany. The China-Belarus Great Stone Industrial Park in Minsk has attracted several companies from Europe including Lithuania.

Since the introduction of BRI, bilateral cooperation between China and Lithuania has been lifted to a new height, bringing about some tangible and mutually beneficial results. China attaches great importance to Lithuania's need to increase exports of agricultural products to China. In 2016 and 2017, China and Lithuania signed protocols for aquatic products, dairy products and frozen beef export to China. The export value from Lithuania to China grew by 17% and 56% respectively in 2016 and 2017. To connect Lithuania's Fintech strategy with the BRI, China actively supported Lithuania to establish 16+1 Fintech coordination center, and host 16 +1 High-level Fintech Forum.

Mr. Macikas is suspicious of the Chinese company's intention to participate in Klaipeda port project. In fact, upgrading Klaipeda port is Lithuania's development strategy. The Chinese company wishes to take part in the project based on its competitiveness through public tender. All Chinese companies doing business in the European market will certainly play by the EU rules, policies, laws and the institutional system of the country where they operate. All cooperation is transparent commercial transactions instead of political deals. Chinese investment should not be smeared. It is wise and sensible to avoid protectionist tendencies and not to look at Chinese investment through the lens of 'cold war'.

China-European relations are healthy and positive coopetition instead of Zero-sum games. We will keep seeking opportunities to cooperate through benign competition, so as to expand common ground and common interests and eventually for common development.

NOTE: The opinions expressed in this article are solely the author's and do not represent those of the Lithuania Tribune or its staff.

Win-win Cooperation is an Unyielding Principal