Elections in Zanavykai send good news to all of Lithuania 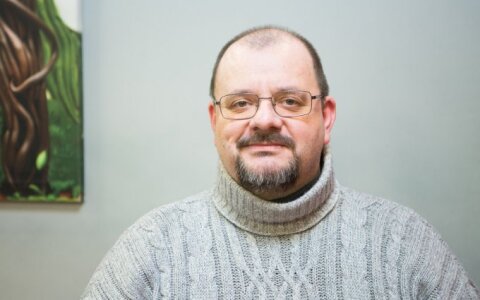 Conservative Irena Haase entered the second round of the repeat Seimas elections in Šakiai with 35 percent of the vote versus 20 percent of the self-nominated former social democrat Bastys, for whom, after the Constitutional Court's ruling about breaching his oath, this election has become a sort of test of faith from the people of the region, Audrius Bačiulis writes on lzinios.lt.

Everyone is horrified – how could this be?! A patriot against a traitor to the homeland and with only this little of a gap? A partner of KGB agents and Rosatom, who acted against Lithuania, is in the second round?

Well, first of all, congratulations on witnessing the face of "Second Lithuania." It has always been like this, just the Vilnius and Facebook bubble failed to see it.

Way back when, I was responsible for organising public opinion surveys and summarising results in Veida. Based on the responses, I made a conclusion for myself that some 20-22% of the Lithuanian population strictly shunned the changes brought on by independence and long for the soviet times.

Hence, 20% of the vote for the son of the regional communist party secretary and kolkhoz chairman, as well as the agent of Rosatom interests is more akin to norm than surprise.

Second, Mindaugas Bastys is a strong candidate: young, handsome, wealthy, local, stems from soviet nomenclature lords and inherited not only business from his father, but a place in the Šakiai region municipality and a mandate in Seimas. Such individuals are feared and respected in the province because they see that whatever the government in Vilnius, there will always be the Bastys family in Šakiai region.

During the last elections in Zanavykai district, Mindaugas Bastys obtained more votes than the Social Democrat Party that nominated him. It was him carrying the party, not the contrary. For the Social Democrats (both those of Kirkilas and those of Paluckas), Bastys' forced resignation was a major loss.

Third – these voting results aren't all that frightening.

Just look – despite Bastys being in the second round, in the end it is four times easier to find those in Zanavykai, who did not vote for him than those, who are fine with a politician in Seimas, "Whose links pose a threat to Lithuanian security" (An official statement from the Seimas National Security and Defence Committee, by the way).

Compared to the 2016 elections, Bastys has lost more than a third of his voters, who would appear to have shifted to the Paluckas Social Democrats' Paulius Visockas (at least arithmetically – Bastys loses 1137 votes and 1203 votes earned by his former party's Visockas, which allows to make such a guess).

And even if all of Visockas' votes had gone to Bastys, he would still not have gathered more than conservative Irena Haase. And it is doubtful whether in the second round, those Social Democrat voters, who chose a clean Paluckian instead of a secret friend of KGB agents and Muscovians, would hand their votes to Bastys just because his rival Haase is a conservative.

Fourth – this election shows the real, not sociological survey, but more or less tangible voters' moods.

In 2016, the Farmers and Greens Union raked in votes in Zanavykai, taking 25.5%, while their nominated candidate RImantas Valiukas was left fourth with 17.7%. This year, the "Farmers" nominated Minister of Agriculture Giedrius Surplys ended up third with once again 17% of the vote.

One must consider that Zanavykai are inclined to vote for their own. Valiukas was a local farmer, familiar to the voters, while Surplys was sent in from Vilnius by the party's decision, thus voting for him could likely be compared to voting for the party.

This approximately 17% of the vote is quite close to what sociological surveys draw up: Vilmorus – 15%, Spinter Tyrimai – 15.8%, Baltijos Tyrimai – 14.8%. Considering that the "Farmers" and especially their leader Ramūnas Karbauskis remain the constant target of news media and the Facebook bubble's opinion leaders' attacks, minister Surplys' 17% should be viewed as the real rating of the Farmers and Greens Union.

Let me remind you, in 2016, the LVŽS as a party gathered 21.53% of the vote across Lithuania. It is normal for the ruling party to lose a fifth of their votes, especially considering that no party in Lithuania has one back-to-back elections.

At the same time, it is an indicator that panic being fostered that supposedly "Karbauskis will win all the elections, will have his own Seimas, his own cabinet and his own Presidential Palace, his own courts and will establish a terrifying Naisiai dictatorship," is simply white noise. All those fears are based on solely Karbauskis himself sometimes trolling his opponents, rather than objective data. Such doom saying about the end of the world says more about those, who are using Karbauskis to frighten than about Karbauskis' own supposed powers and threat.

Equally, various pre-electoral fearmongering has not proven true that in the second round, the pro-Russian Karbauskis will make his "Farmers" vote for the pro-Russian Bastys and then it's over for Lithuania – a pro-Russian KGB agent in Seimas yet again and we're all suddenly in Moscow's grasp.

In reality the opposite happened – the morning after the elections, Karbauskis announced he sees no chances of backing Mindaugas Bastys' candidacy and if, God forbid, the latter returned to Seimas, he would organise impeachment.

Of course, the "Farmer" leader did not miss the opportunity to lie about Irena Haase, claiming that she is in favour of homosexual marriage, while in reality it is the contrary, but let us not wish for Karbauskis, who pathologically hates the Conservatives, to suddenly become their backer. He did not support Bastys and that's already good. He stated that it will be minister Surplys, who will decide himself, who to back in the second round – all good.

This is because Surplys has already publically endorsed Haase against Bastys in Zanavykai, same as two years ago, in Naujoji Vilnia district, he endorsed Conservative Monika Navickienė against the pro-Kremlin Algirdas Paleckis. In the end, when the choice comes down to – for Lithuania or for Russia – Lithuanians manage to forget their political disagreements. This is perhaps the best news from the first round of the elections in Zanavykai.

Elections in Zanavykai send good news to all of Lithuania