Karbauskis’ strategic election plan: this could break the entire system 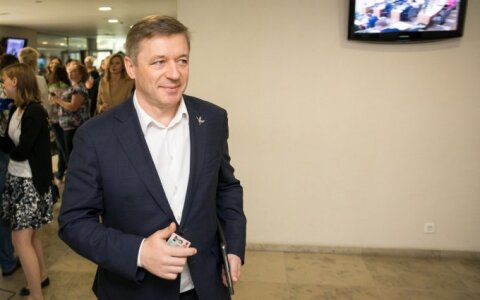 With the municipal elections drawing closer, Farmer-Greens leader Ramūnas Karbauskis has proposed to allow civic committees to form electoral coalitions with one another and parties. Experts warn that this is a step, which weakens the party system.

"At the moment parties can form an electoral coalition, but not with committees, nor can several committees with one another. We are proposing to equalise the options," R. Karbauskis told Delfi, stating he finds no flaws to such a proposal.

"A certain period has simply passed and we must admit that committees should have the same right as parties in elections because why not. I do not have a single argument why this should not be," R. Karbauskis, who does not view civic committees as competition in the municipal elections and describes the proposal as the "expansion of democracy."

R. Karbauskis has yet to prepare any legislative projects regarding committee financing. However, he intends to consult the Central Electoral Commission regarding it.

"This proposal is yet another step toward breaking down the party system in Lithuania. State policy is to strengthen political parties. This strengthening primarily manifests in, for example, them receiving financing from the budget. It is part of state politics. In all democracies, the state seeks to strengthen its political parties," J. Novagrockienė stated.

According to the political scientist, these steps may be being taken in order to easier find suitable partners in the municipal elections. Vytautas Magnus University docent Aistė Lazauskienė also notes this is a potential reason.

"We know that people are disappointed with parties and committees are on a roll. This trend is visible not only in Lithuania, but also abroad. There is increasingly less voting for parties in municipal elections. Thus, it could be a cunning step, seeking to draw more votes," A. Lazauskienė said.

According to the General Jonas Žemaitis Lithuanian War Academy scientist, this is yet another step in weakening political parties, alongside what they have done themselves.

"For example, the Social Democrats broke apart or the constant seeking those to blame or those innocent. Looking broadly, an image forms that everything is being done for a party system to disappear from Lithuania. This is yet another step," J. Novagrockienė criticised.

According to the scientist, politically it would be a very irresponsible decision.

"There is a pursuit of means to strengthen democracy, how to involve as many players as possible. But nevertheless, there are democratic procedures, there is very clear competition, where there are alternatives.

Meanwhile, here we see a short-term demand to form extra benefits for those, who now decided that they must enter one or another structure no matter the cost," J. Novagrockienė said.

Sounding an alarm over parties' future

Homeland Union – Lithuanian Christian Democrats (TS-LKD) leader Gabrielius Landsbergis expressed concern already in March to his party's council over the rise of anti-establishment forces and the future of political parties.

Back then, having returned from a working visit to Brussels, G. Landsbergis recounted his impressions to fellow party members from the traditional European People's Party party leaders' meeting held prior to European Council meetings.

"Angela Merkel's speech was especially notable. (...) Her thesis was that she cannot recall a time when her party would have been as beleaguered as it is now. Besieged by anti-establishment movements, whose main message is that European parties have aged, cannot offer anything new and that it is time for them to close down," G. Landsbergis said.

He reminded that in Germany, the greatest challenge against the CDU is from the radical right wing AfD.

"Another pressure appears from new movements, whose symbol is now the French president. It was news for me to find out that similar movements initiated by him are being formed across Europe, a movement is even registered in Germany. The message is singular: that's it – this system has aged, we need a new one," G. Landsbergis said.

According to him, A. Merkel did not offer a solution, her topic was then taken by other state leaders, who also noted that all states are experiencing the same.

"She did not offer a clear solution. She simply said that we are entering a new reality where we will have to answer very serious and fundamental questions, how we are to continue living," G. Landsbergis said. According to him, the situation in Lithuania is the same. "There is a clear topic in Lithuania, whether parties have a future. Some of our colleagues from other traditional parties are seemingly doing their all to convince that they no longer do," G. Landsbergis said.

58 committees participated in the 2015 elections. Five in Šiauliai, four each in Alytus and Kaunas, three each in Panevėžys, Raseiniai and Šilutės regions, as well as Visaginas. In most of Lithuania (including Vilnius and Vilnius region), there were no civic electoral committees founded.

"However, it would appear we will have a different situation in 2019," VRK chairwoman Laura Matjošaitytė has said.

Municipal elections in Lithuania will be held in February-March 2019.

Karbauskis’ strategic election plan: this could break the entire system