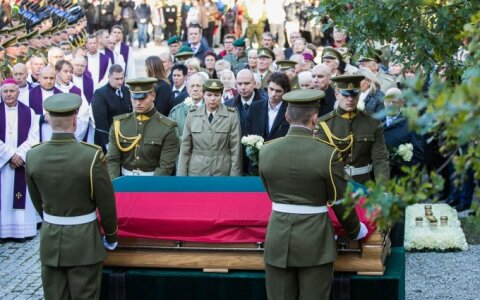 Diplomats from 30 countries, including the United States, the United Kingdom, Germany, Japan and Israel, honored the memory of anti-Soviet partisan commander Adolfas Ramanauskas-Vanagas during his state funeral on Saturday.

The Israeli ambassador paid his final respects to Ramanauskas-Vanagas during the ceremony at St Johns' Church on Friday. He did not attend the funeral on Saturday due to Sabbath.

Chargés d'affaires from Canada, Croatia, the Czech Republic and Slovakia also confirmed their attendance, and the Unites States Embassy was represented by a deputy of the head of the mission.

Discovered and identified this summer, the remains of post-war hero Ramanauskas-Vanagas were buried at Antakalnis Cemetary's pantheon of state leaders in Vilnius on Saturday.

The partisan commander's flag-draped coffin was escorted to his final resting place by the country's leaders, soldiers and thousands of ordinary people. Members of the public were able to pay their final respects at St Johns' Church on Friday and Saturday.

Ramanauskas-Vanagas, the commander of the Dzūkija partisan region in southern Lithuania, was among the partisan leaders who signed the Union of Lithuanian Freedom Fighters' Declaration in 1949. He was appointed commander-in-chief of Lithuania's defense forces in the same year.

After several years in hiding, Ramanauskas-Vanagas was arrested and brutally tortured by the Soviets in 1956 and executed a year later.

Prime Minister Saulius Skvernelis said the state funeral for Ramanauskas-Vanagas was "the restoration of historical justice".

"I think it's a day of victory for our nation, for our freedom fighters, because the man will be given a proper burial, marking the meaningful struggle of our partisans, which ultimately achieved its goal.

The guerrilla war in the Baltic states started after Soviet troops in the summer of 1944 pushed Nazi forces out of the countries and occupied them for the second time. A period of Soviet repression, terror and forced mobilization to the Soviet Army began immediately after the reoccupation.

The armed resistance lasted until 1953. Partisans' goal was achieved when Lithuania regained independence in 1990.