Jüri Luik: I think we can cooperate more 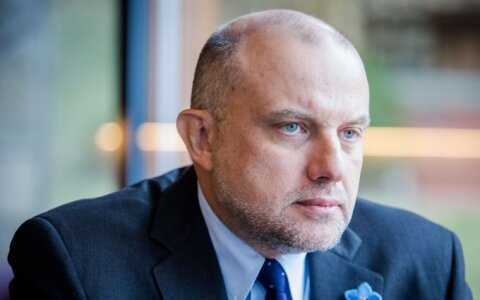 Estonia is often presented as a model country among the Baltic States, however it faces all the same security challenges as Lithuania and Latvia, ranging from defence spending to ensuring security in the face of difficult relations with Russia, to finally issues with NATO itself. The Lithuania Tribune interviewed Estonian Minister of Defence Jüri Luik at the Riga Conference 2018 to find out more, how the Northernmost Baltic State perceives security in our region.

Yesterday we heard one of the most famous phrases of the conference "If we don't hang together, we will be hanging separately." What about the Baltic defence cooperation? Is it, would you say that it is on a sufficient level? Especially regarding acquisitions. Or can we cooperate more?

I think we can cooperate more and the reason why the cooperation perhaps has not been as active as we would like it to be is, of course, that while we generally have the same concept of defence, when you go deep down into nuances, then there is a number of differences. When you buy equipment, then you have to have a unanimous understanding of what type of self-propelled howitzer you want, whether you want medium range air defence, what types of helicopters you need. So putting it all together, it's actually quite complicated.

Also, defence spending. Estonia has been spending 2% now for quite some time. Now, Lithuania and Latvia are also spending 2%, but of course, we have already bought some of the stuff, which you have to start buying, so there's no point buying it all over again. I would say these are certain objective reasons.

There is a lot of political will, my cooperation with my colleagues is excellent and what is equally important, there is a certain working group of defence investments. Also, our experts are sitting together very frequently and discussing those issues. So I hope in the future we can do more.

Estonia has done a number of joint purchases with Finland when it comes to radars, now we are buying K9 self-propelled howitzers from South Korea together with the Finns. In general, this kind of buying together is very useful of course because you get lower prices and you can have joint training opportunities, a joint repair base. I think the aim is good, we simply have to find the right products.

Estonia has been spending 2% for a long time. Lithuania is now debating increasing its spending to 2.5%. This is quite a divisive debate in Lithuania. Is Estonia considering increasing spending or are you quite happy with your 2%?

I would very much support spending more. 2.5% would be the target I have proposed and also the political party, which I represent, Pro Patria, is supporting. But elections are coming. It is not a very popular election issue – elections are always focused on social spending and things like that, so I hope perhaps at some point we can have a constructive discussion in Estonia regarding the need to raise defence spending.

Also because we are very small countries and even if we spend 2%, in absolute terms it is still very little and the weapons cost the same for everyone – for us, for Germans, for big and small countries. So if we want a certain quantity of equipment for instance or personnel, we have to spend more, that's unavoidable, so yes, I support raising it to 2.5% and I think it is entirely logical and can be supported with facts, figures and very concrete things.

A lot of Russian media and Russian politicians are saying that any increase of NATO presence in the Baltic States and Poland will also diametrically increase their presence next to the borders of the Baltic States and Poland. How do you think we can counteract this message that we are actually only reacting to the Russia's aggressive behaviour. It's not us who are aggressive, but the Russians, who are.

Well I think, when you look at the actual facts on the ground, then of course, Russia has massive amounts of troops, tank armies on its side of the border, so even if the NATO presence or US presence were raised, we would still never achieve any type of amount of troops, which could be claimed as too big or something like that.

So I think it's more a propaganda efforts than a real belief of the Russian military, which actually knows how to count the troops. If they say they will bring even more troops, it will almost make no difference because the size is so large, even if you add another division, it almost doesn't make a difference qualitatively, so I would not be too worried about that.

The challenge is that at the moment there are no plans to add any NATO troops in our territory or even to Poland, so that is something that I think we have to work on and I have always said that what provokes Russia is not the presence of troops, but the lack of troops, weakness.

When it comes to Russian aggression, it is proven by facts. It is not something we have somehow developed as an abstract fear. It's Georgia, it's Ukraine, both Crimea and Eastern Ukraine, it's the Skripal case, it's Syria. So there is a body of evidence that everyone can touch, verify and be certain about, which is the best proof of what the intentions of Russia unfortunately are.

Yesterday there was a call to upgrade the status of the Baltic air-policing mission, give it more "bite". I'm not sure to what extent this "bite" is implied there, perhaps even shooting down Russian aircraft? How would you respond to that?

Well, we have to keep in mind that in principle the idea of changing air policing from a purely peacetime mission to air defence is a good idea, but it cannot be done simply by giving an additional order to the planes we have here, to say that they are no longer air-policing, but on air defence and have different rules of engagement and etc. etc.

Air defence is a military mission and it is a wartime mission. So basically, you have to develop a very wide range of capabilities, to be realistically capable to defend the territory. I am not speaking about shooting down one perhaps terrorist plane. I am talking about air defence as such. You have to have different layers of defence, it cannot be done by planes alone. So basically it's a good idea, but it actually takes a lot of funds, both from NATO and from us, so it's a matter of political decision, how far we go with it.

The idea is good and it sounds simple – you just rename it. But in practical terms it is actually very complicated and quite expensive.

In Lithuania, of course there is much talk about the Suvalkai corridor, the narrow strip of land. What is the Estonian perspective here? You may be quite distant from it, but it remains very important for all the Baltic States.

It is absolutely important because land access to the Baltic Sates goes via the Suvalki corridor for Lithuania, but also for Estonia. So we consider it an area of great strategic importance and we are very happy that Lithuania is putting so much attention in protecting that area. Your decisions here, your actions are very very important to Estonia as well.

What is Estonia's Suvalkai Corridor? Do you have such a place?

Everybody has their weaknesses. We perhaps don't have this one dramatic place, which is the Suvalki corridor, a fairly small area. We have several vulnerabilities in different parts of Estonia. When you look at the map, they are quite evident, but obviously, we are trying to address them as best as we can.

The Bronze Soldier incident that happened already quite a while ago. Are there any lessons that needed to be learnt from that, which perhaps have not been heeded or overlooked, not applied by other countries?

Well, the important part of it is that many wartime memorials have been removed to other places in different countries. Many many in Russia. So this was a provoked action by Russian authorities. It ran in parallel with blockading our embassy in Moscow, which was also a very traumatic step.

In terms of future developments in Europe, Europeans are talking about the lack of attention from Washington or that we cannot really rely on Washington any longer and they think about creating or strengthening the European defence, creating some kind of army. Where does Estonia stand on this?

I think it is good that we are working with the European Defence Project, but quite honestly, it can never replace NATO. The defence of European territory will always be NATO's role. Also, when we do a large operation, let's say similar to Afghanistan, then it is evident that Europe cannot do it on its own.

So with Europe we are talking of fairly small scale missions, like what we have in Africa in various places or advisory missions, police missions. I think it is very unlikely and not necessary to acquire strategic autonomy. We have to do our best to be ready to operate in small operations where the United States doesn't want to be in orbit and there are some areas where they have no interest. But I think we have to do everything in our power to keep the United States in Europe, to strengthen the transatlantic relationship and not to have these unrealistic ideas that we can somehow do it on our own because it is simply unrealistic.

Thank you so much for the interview.

Jüri Luik: I think we can cooperate more