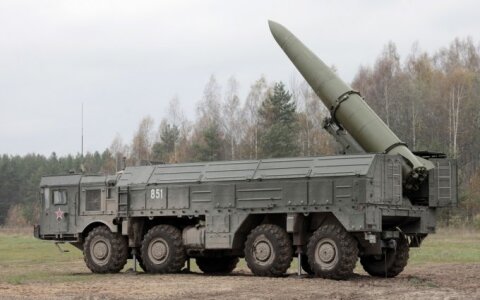 The United States' threat to pull out of a bilateral treaty banning intermediate-range nuclear missiles was a necessary step to warn Russia to respect the terms of the pact, Lithuanian Prime Minister Saulius Skvernelis said on Thursday.

"I think it was a necessary step and Russia should have understood the signal. As we can see from reactions, this is probably going to happen," he told the Žinių Radijas radio station.

According to the prime minister, the US signaled a decade ago that Russia kept breaching the terms of the treaty and Moscow's actions in the Baltic Sea exclave of Kaliningrad five years ago proved to the international community that this was true.

"The best example is the deployment of the so-called Iskander missiles near our border, in the Kaliningrad region. So, if one of the parties fails to respect the treaty, then the US statement that they can withdraw from the pact is a signal to the party that violates it. This is a kind of pressure, and I believe that, judging by the reactions, this pressure has proved effective," Skvernelis said.

US President Donald Trump announced last Saturday that Washington was withdrawing from the Intermediate-Range Nuclear Forces Treaty (INF) signed between the US and the Soviet Union back in 1987.