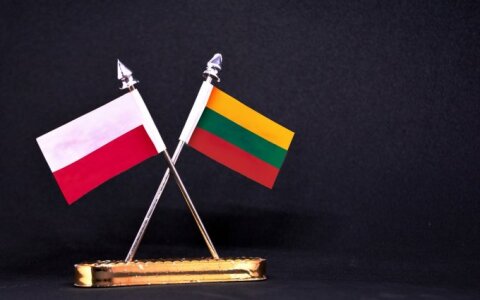 The Lithuanian military cannot guard the state properly without public support. This is well understood by states antagonistic to Lithuania, which try to weaken our state by sowing conflict and discord between various societal groups in Lithuania and by diminishing the importance of national defense. Despite the efforts by antagonistic states, the Lithuanian ethnic communities continue to play an important role in the modern effort to strengthen state security, just as they did in the historical effort to secure Lithuanian independence.

One of the goals of the informational warfare currently waged in and against Lithuania is to worsen the relations between Lithuania and Poland.

Propaganda often portrays Russian and Polish citizens of Lithuania as perpetually oppressed, persecuted group. In this context, the Russian government tries to present itself a certain savior or protector. One can also observe that the effort to discredit Lithuania’s national defense has intensified. Kremlin-owned media outlets circulate narratives that Lithuanian defense expenditure causes emigration, or that expenditure for social needs and defense are mutually exclusive. Further, the need for NATO military exercises is continuously questioned, there are constant attempts to discredit Lithuanian and NATO troops with fake messages or fabricated news stories.

Despite the Russian propaganda efforts, the Lithuanian society as a clear and reasonable outlook on defense.

Lithuania, much like any other state, has an army to ensure its own security. Nobody is questioning the need for the police, firemen, or medics – and the same applies to the military. The importance of strengthening defense capabilities is well understood not only by ethnic Lithuanians, but also by citizens of Polish, Russian, or other national or ethnic groups. They are equal members of the Lithuanian civic society and participate in all aspects of public life, the military included. The fact that citizens from non-Lithuanian national or ethnic communities always volunteer to join the country’s draft military service proves that the society understands the challenges to the Lithuanian state and the geopolitical reality of the region and are ready to defend our state’s freedom.

In critical moments, national and ethnic communities acted in unity

According to the representatives of the Department of Ethnic Minorities, ethnic and national communities in Lithuania have long respected and defended the country in which they lived, even at the moments of gravest danger.

“National and ethnic communities in Lithuania have always guarded its statehood, promoted its Independence through peaceful means, and took part in it defense when the need arose. After Lithuania achieved freedom, both ethnic Lithuanians and members of other national or ethnic groups fought in the 1918-1920 Wars of Independence. Many members of ethnic minorities responded to the call for volunteers in the Lithuanian army fought bravely and even sacrificed themselves for Lithuanian freedom,” remind the officials at the Department of Ethnic Minorities.

National and ethnic communities have also played an important role in the effort to reestablish Lithuanian independence.

“During the Sąjūdis years, 26 representatives of national or ethnic minorities in Lithuania signed the declaration of their support to the goal of Lithuanian independence. Citizens belonging to all national and ethnic communities supported the referendum calling for the departure of the Soviet army, stood in the Baltic way together with ethnic Lithuanians, and defended the Independence during the January 13 events,” tell the representatives at the Department of Ethnic Minorities.

In this difficult time for Lithuania, more than 3000 representatives of various national and ethnic groups in Lithuania demanded Mikhail Gorbachev, the last president of the USSR, to immediately stop the violence perpetrated by the Soviet army in Lithuania. During the bloody events of January 13, when thirteen civilians died. Among them was Loreta Asanavičiūtė, who had Tatar ancestry, and Rolandas Jankauskas, whose mother was a native Russian. In response to these events, the Ukrainian community in Lithuania distributed a call for the Soviet soldiers asking to not attack citizens of Lithuania, who are peacefully defending their Independence.

“The painful history of Lithuania and the tense geopolitical region that surround it constantly reminds us that freedom is not a guarantee, that it should be cherished, guarded, and defended. Only if we understand that all citizens of all national and ethnic communities are equally important to creating the modern Lithuania and all take responsibility for the state’s welfare and security, can we resist threats from the outside,” claims the Department of Ethnic Minorities.