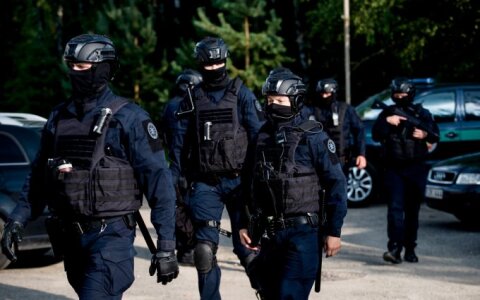 The Lithuanian government decided on Wednesday to submit a package of legislative amendments aimed at clarifying the legal regulation of martial law to the parliament for approval.

The Defense Ministry says the proposed amendments would help ensure a smooth transition from a peacetime legal regime to a wartime one, fast decision-making and smooth functioning of public authorities and economic entities under a state of war.

The bill provides for launching armed defense immediately after the signing of the respective presidential decree or Seimas resolution, without waiting for the document to be made public and take effect, as it is now.

The State Border Guard Service, the VIP Protection Department, the Public Security Service and military intelligence officers would automatically become part of the armed forces. The current law requires the commander-in-chief to sign the respective order to assign them to the armed forces.

The proposed amendments also give a stricter definition of guerilla activities in an effort to prevent robbing gangs from disguising as partisans. Under the existing legislation, partisan units would automatically become part of the armed forces.

It is proposed that partisan units should be assigned to the armed forces by the commander-in-chief or a person authorized by him or her, or, in the absence of such a person, by the command of the national resistance command. The bill also requires that partisan units should have their commander and structure, coordinate actions among themselves, carry weapons openly and wear an identifying emblem.

The bill would also give some additional powers to the president. The law would be supplemented by provisions that the head of state adopts state defense decisions binding on authorities, coordinates diplomatic measures for state defense and sets the needs and priorities for intelligence information.

It would also specify the powers of the government, the defense minister and the chief of defense. For example, the chief of defense would have the authority to prohibit the use of electronic communications and the operation of civilian aircraft and ships. These issues are not covered in the existing legislation.

The government proposes to give the martial law bill the status of a constitutional law, which means that it would require more votes to be amended by the Seimas.

If endorsed by the parliament, the amendments will take effect in 2020.